No Jews or Israelis Allowed 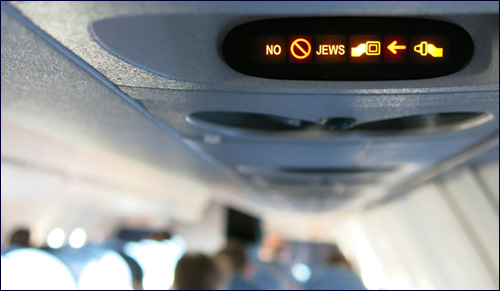 Kuwait Airways cancels its route rather than do business with Israelis. This discrimination isn’t the only recent example.

Rather than allow Israelis to purchase tickets, Kuwait Airways has just cancelled a popular route between New York and London.

The recent announcement came after the United States Department of Transportation investigated the airline’s policy of refusing to sell tickets to Israeli citizens – and ordered Kuwait Airways to “cease and desist from refusing to transport Israeli citizens…” Rather than comply, the airline announced it was cancelling its flights between New York and London.

Kuwait Airlines defended its policy of refusing service to all Israeli citizens. Kuwaiti law prohibits having any contact with or agreements between Kuwaiti nationals and those with Israeli citizenship. Although the airline no longer flies between the US and Europe, it continues to fly direct to Kuwait from the US and other locales – and continues to refuse service to Israelis, with impunity.

Here are other outrageous examples of people being boycotted because of their ties to the Jewish state.

When the Israeli Hayardeni family planned a Chanukah 2015 family trip to neighboring Jordan they were turned away at the border. Their crime? The father and two sons were wearing kippot.

Mom Tamar Gewirtz Hayardeni, a licensed tour guide who has visited Jordan before, tried to intervene, saying her husband and sons intended to wear hats while touring Jordan. The guard was undeterred. In the midst of the Hayardenis’ conversation with the Jordanian border guards, another Israeli tourist was brought into the room. An x-ray had detected the tefillin in his luggage and he too was denied entry to Jordan. Apparently Jordanian border officials are enforcing a their own ad-hoc policy that forbids all Jewish items from entering the country.

All Jews Leave the Room!

The June, 2014 opening ceremony for the 23rd African Union Summit in Malabo in Equatorial Guinea was to include representatives from scores of countries, all brought together to discuss political, cultural and economic ties. Instead, the summit turned into a showdown with Arab delegates successfully demanding that the meeting be Jew-free.

"It all began when one of the Arab delegates, from Egypt, approached us at dinner the night before the opening and asked what we were doing here, pointing at the men wearing kippahs," said Israeli businesswoman Yardena Ovadia, who had arranged for 14 delegates from the American group the Conference of Presidents of Major Jewish Organizations to attend the summit.

The next day, Arab League representatives refused to enter the conference hall until all Jews, which they called the “Israeli delegation”, leave the room. Ovadia explained that the Jews were American, not Israeli, but the Arab delegates refused to budge. "We were already seated in the conference hall," Ovadia explained. "The heads of the Arab League announced a boycott of the conference until the 'Israeli delegation' left." Finally, the fourteen Jews stood up and left the hall.

An American official present protested, but other officials – including UN Secretary General Ban Ki-moon, the Prime Minister of Spain and other diplomats – did nothing to prevent the Jews’ expulsion.

"I have never seen such racism, such anti-Semitism. We were humiliated," said one of the Jews forced out of the room. After the Jews left, the conference continued after a half-hour delay.

When London Mayor Boris Johnson travelled to Israel and the Palestinian territories in November 2015, he went with a group of British journalists who recorded his every move. But when Mr. Johnson was invited to meet with members of the Palestine Business Women’s Forum, one journalist was banned: Noga Tarnopolsky, an Israeli-British Jew covering the visit for the British Jewish newspaper the Jewish Chronicle.

Tim Shipman, the political editor of the Sunday Times, who was also on the trip, responded for many when he said, "As far as I'm concerned, journalists are citizens of the world and to prevent any reporter from doing their job in an impartial and independent fashion, whatever their nationality, is absurd." Stephen Pollard, editor of the Jewish Chronicle, responded: “This is the reality of BDS. Forget the lies about it targeting institutions rather than people. As this outrageous ban on a journalist for no reason other than her nationality shows, it is about singling out individual Israelis and telling them that they are banned as people.”

After Mr. Johnson criticized the BDS (boycott, divestment and sanction) movement that targets the Jewish state, many of his remaining meetings with Palestinian officials were suddenly cancelled.

Israeli Athletes Left off the Fields

When it comes to Israelis, notions of sportsmanship often go out the window, with teams ditching their Israeli players or refusing to play Israeli rivals. That’s what happened in January 2014 when members of the Dutch soccer team Vitesse from the Dutch town of Arnhem were scheduled to play four matches against two German teams in Abu Dhabi. After their Arab hosts made it clear that the team’s Israeli-born defender, Dan Mori, wasn’t welcome in their kingdom, the team flew to Abu Dhabi without him.

Later in 2014, Abu Dhabi again refused to allow Israeli athletes into the country. Israeli windsurfers Shahar Zubari and Ma’ayan Davidovich had to drop out of the elite World Cup Final held in Abu Dhabi November 27-30, 2014 after United Arab Emirates officials refused to issue the Israelis visas.

Even at the Olympic level, some athletes refuse to compete against Israeli players. At the 2004 Olympics in Athens, Arash Miresmaeili, a judo world champion and the gold medal favorite, suddenly dropped out rather than fight an Israeli at the games.

Jews and Dogs not Welcome

Bans – or attempted bans – on Jews or Israelis have been cropping up in Europe over the past few years.

In Belgium, police in the summer of 2014 removed a sign from a cafe in a Liege suburb that read in French and Turkish ““Dogs are allowed in this establishment but Jews are not under any circumstances.” (The French text replaced “Jews” with “Zionists.”) That same month in Belgium, an Orthodox Jewish woman was turned away from an Antwerp store; an employee later explained to journalists the shop’s ban against Jews “out of protest” against Israel. And an Antwerp doctor refused to treat an elderly Jewish woman with a broken rib, telling her to “go to Gaza” for treatment instead.

In August 2014, British MP George Galloway, representing the town of Bradford, claimed to have “declared Bradford an Israel-free zone”, saying that he wants the city to reject all Israeli goods, services, academics – and tourists. In the following days, he repeated his claim, even urging other British cities to adopt his “policy”.

Some individual stores in Britain – and elsewhere – seem to be adopting their own Jew-free policy at times. Sports Direct, a sporting goods store in Britain, was forced to apologize after one of its guards barred Jewish teens from entering in September 2014, saying “no Jews, no Jews”. Meanwhile, in downtown Istanbul, a mobile phone store posted a sign in its window warning “The Jew dogs cannot come in here.”

We've been down this road before. In the 1930s, Germans branded Jews "Untermenschen": a term meaning lesser or somehow subhuman. This insistence that Jews were a case apart – different from other people and not deserving of basic human respect and empathy – paved the way for the gross antisemitism that followed.

Today isn't the 1930s; Jews are not held in the same contempt as we were then. But if history is any guide, singling out Jews – or any group – for special opprobrium breeds ever more mistrust and hatred. With anti-Israeli feeling spiraling around the world, it's time to stand up and insist that Israelis – and those with ties to Israel – deserve the same respect as everyone else.

Rabbi Noah Weinberg, of blessed memory
The Connection between Israel and the Jewish People
Grit and Torah
Why We Can’t See True Reality
Comments
MOST POPULAR IN Jewish Society
Our privacy policy