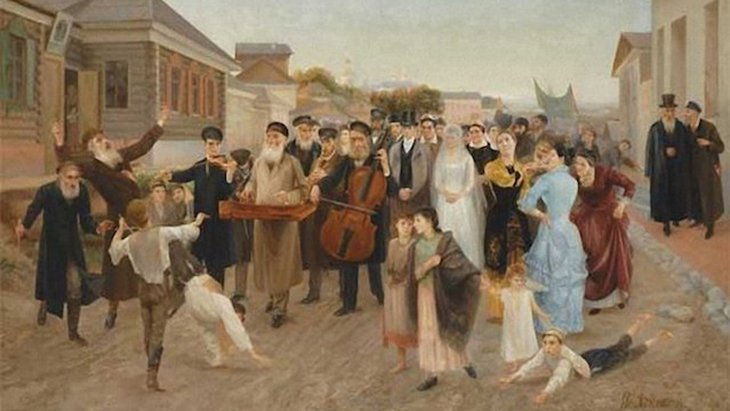 Tales from the shul board.

The Wise Men of Chelm have been memorialized in Jewish literature by Jewish storytellers such as Nobel Prize winning novelist Isaac Bashevis Singer. But sadly, for many years we have not heard from them. Until now.

I am pleased to report that the shul board in Chelm reached out to me for assistance. What follows is what I have gathered from pouring over their shul board’s meeting minutes and conversations I have had with various board members who are all no longer talking to one another.

How Do We Go to Shul in the Snow

Winter was cold. A snowstorm just hit and snow was everywhere. “What do we do?” they asked. The head of the social committee, Rivka, made it clear, “There is too much snow to walk to shul.”

Menachem, the chairman, said, “We must stop the snow.” They threw out nets to catch the snow, but that didn’t work. They cried out to Hashem, a cry that could be heard throughout the village. They sent Berel the Gabai, beadle, out but he couldn’t stop the snow. Berel couldn’t even get Yankel Tzvi Ben Mendel Simcha’s name right when he called him to read from the Torah. Nothing worked.

Yankel related the story of the great rabbi who would take his high boots early in the morning and trudge through the snow, to flatten the snow, so his congregation could come to shul. That idea was met with great protest, “That would mean walking through the snow. Our rabbi is new. His contract said he only gets paid for the speech. We cannot pay him overtime, to walk through snow.” Yankel asked, “What about one of us volunteer to flatten?” But they all agreed that they had already volunteered to come to the meeting, and no further volunteering could be done.

So the difficult decision was made. “Shul is cancelled,” Batya announced. “There is too much snow.” Noticing the somber reaction Batya added, “But there is good news. Shlomo lives on the other side of the river. Let's have the services at Shlomo's house.” All shouted for joy, “Brilliant!” On Shabbat, they all walked through the snow to Shlomo's house.

A note on that meeting: When Yankel asked everybody how they were going to get back home from shul after the meeting, they all responded, “You fool. We’ll walk.”

A gust of wind hit the shul’s door and it was thrown off its hinges. The idea to fix the door was brought up at the board meeting. “We should purchase new hinges for the door,” said Yankel. “Oy,” Moishele objected, “He knows nothing. We have to fix the door. And this fool brings up hinges?!” The board was in a panic and had no idea what to do. At that moment, Berel raised a fresh idea. “We will buy new doors,” he exclaimed. And all were in awe. “This is why we have a Gabai,” Fayge shouted with joy.

As the group went shopping, they saw many elegant wooden ornate doors, but every one of them needed to be attached with hinges. Bayla knew these doors could not work. She continued, “We are a shul. We need building doors. Doors with hinges don’t work.” A beautiful set of glass doors glistened in the corner of the shop. They were all drawn to them. Rabbi Fishel told the board how great these would look at the entrance to the shul. They all jumped for joy, and reprimanded Yankel, who so foolishly suggested purchasing hinges. Moishele expressed his delight, “The glass is so beautiful. You can’t even see them.” So, they bought the electric sliding doors.

The next day was Shabbat and the whole community was standing outside. Countless people were gathered outside. One asked the next, “Why is nobody going into shul?” Duvidel’s said, “We can’t use these doors on Shabbat. They’re run electronically. We are not allowed to use electricity on Shabbat. So we can’t go into shul.” Berel, the Gabai, was there to help explain, “These are weekday doors. These are not Shabbat doors. We will come back tomorrow and use them when Shabbat is over.”

Chutzpadik Duvidel asked, “Then why don’t we return these doors, so we can pray in the shul on Shabbat?” “Oy!. You foolish man,” Berel replied, “Then what doors will we use during the week?!” And the decision was made, not go to shul on Shabbat.

A note on that meeting: It was also decided to get iPad prayer books for each seat at shul for Shabbat. That was Shlomo’s idea. As he suggested, “We should get all electric Shabbat items for the shul, because since we no longer come to shul on Shabbat, we don’t have to worry about anyone violating the laws of Shabbat.”

The Second Time Around

Proof Jews Are Inventive
The Promise Of The Land
Which Chat Are You On?: Parshas Behar/Lag Ba’Omer
Do You Like Slow-Cooked Food? Thank the Jews
Comments
MOST POPULAR IN Funny Stuff
Our privacy policy