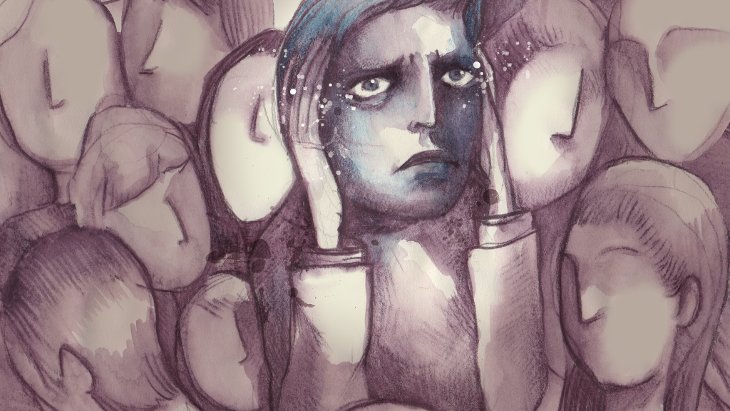 I am a wife and mother of a few kids who works part-time and had a full-blown mental breakdown about a year ago.

Right after the birth of my eldest son 15 years ago, I started suffering from post-partum depression. Symptoms ranged from incredibly disturbing dreams to apathy and a general misery that would just not lift. Looking back, I think that I have always suffered from depression and perhaps if I had been more self-aware, I would have realized this and that I was at a higher risk of developing PPD. I think that the shock of being responsible for a new life, the exhaustion and sleep deprivation conspired against me to make the depression worse than it would have been otherwise.

When my son was six months old, I consulted with a psychiatrist who said that I had to stop breast-feeding immediately and start with a regimen of antidepressants. Thus began my psychotropic journey. Over the years I tried various medications which eased the symptoms and took the edge off the intense feelings. But there was always a heavy price to pay for my sanity. I experienced various side effects from weight loss to apathy when I was over-medicated.

I had to accept medication as part of my daily life.

There were periods of time when I tried to live drug-free. But inevitably, both the withdrawal from the drugs plus the lack of dopamine in my brain forced me to accept that to function in society I had to accept medication as part of my daily life. But I never stopped hoping that one day I would successfully manage to live drug-free.

So about eighteen months ago, I decided to try again. I first consulted with a psychiatrist. I then started weaning myself off Cipralex very very slowly. Within a few short days, I turned into a raging lunatic, yelling hysterically at my children way too often. I felt out of control. I found myself crying often, for no apparent reason. I also stopped sleeping. And yet I kept going, yearning to know that I was capable of living an unmedicated life. I wanted it desperately and I really thought that if I persevered despite these turbulent feelings, I would find a way to go off my meds.

In the midst of all this, two things happened. We were notified that the apartment which we had bought years before ‘on paper’ was ready for us and we could move in within a few short weeks. And I was hospitalized for acute appendicitis on a Shabbos and had to undergo emergency surgery alone (my husband was with our kids in a different city).

The doctors told me that I had to be extremely careful not to lift anything even slightly heavy because I would put myself at risk of developing a hernia and that would necessitate yet another operation. At the same time, I also needed to pack up the contents of our apartment where we had lived for a decade and had accumulated a lot of stuff.

A week after my operation, I descended into hell. I could not stop crying. I could not fall asleep. And when I did fall asleep, I could not stay asleep. I was incredibly anxious. The seconds of each minute passed slowly as I experienced what was essentially a panic attack that spanned a few weeks. Words cannot begin to explain the agony.

Mental illness is like an intruder; it attacks at any time and often gives no warning of the impending storm.

I consulted a psychiatrist and began taking Welbutrin, a different medication. Unfortunately, this just exacerbated the intense obsessive thoughts until one night I was so hysterical that I had to be admitted to a psychiatric facility. Thankfully, they deemed my state of mind to be not worthy of admission. The on-duty doctor recommended that I stop taking Welbutrin immediately because I was clearly very allergic to it, that I urgently consult with my psychiatrist about taking an alternative medication and most importantly, that I find a therapist

I took this medical advice to heart because I could not imagine living like that anymore. Following a course of therapy and medication, I slowly ascended from the depths of the hell of my mental illness.

I wish I could give you a happy ending. Unfortunately I still suffer from depression and I probably always will. I have quite a way to go in terms of my mental health. That being said, I am incomparably different to who I was a year ago. I can go grocery shopping without erupting into tears at the till. I have not had a panic attack since then. I am a better wife and a far more stable parent.

Mental illness is like an intruder; it attacks at any time and often gives no warning of the impending storm. The people you least imagine, the people with the picture-perfect Instagram feed and glorious-looking lives, some of them are struggling with the same demons. A small group of trusted people might know the truth while everyone else sees the impeccable facade.

What helped me get through this gut-wrenching time was God, my family and friends, and my doctor and therapist. Thank God I live in an age where we have access to a variety of medical interventions. My friends and family took my endless calls, listening as I raged and wept, and my doctor and therapist demonstrated endless patience and kindness in its truest form. And when I am not in agony, I consider myself to be eternally blessed for every second of my life.

Lights At The End Of The Tunnel

Want to Understand What It Takes to be a Great Jewish Leader? Learn from Rabbi Noah Weinberg

In Zimbabwe, Unraveling Mysterious Jewish Roots
Why Are The Prayers Of Yom Kipur So Repetetive?
Ha'azinu 5783: A Time for Unity!
Twisted Thinking
Comments