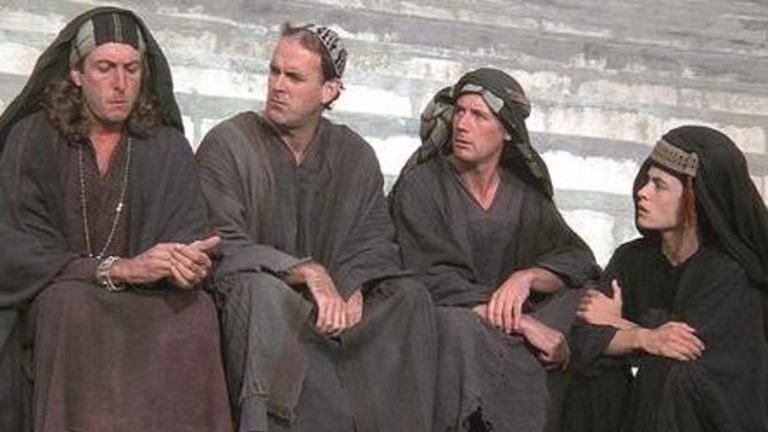 The comedy group were equally offensive to all people.

Listening to the radio the other night, I was pleasantly surprised to catch an interview with Eric Idle, one of the members of Monty Python, the iconic British comedy group. Idle has just released his autobiography, titled after his classic song, Always Look on the Bright Side of Life. As a Brit, I am instinctively drawn to all things Python and listened eagerly.

The surrealist comedy group made their TV debut in 1969 with their show, Monty Python’s Flying Circus. The show, which ran from 1969 to 1974, includes many classic sketches such as the Dead Parrot, Argument and Ministry of Silly Walks. Their three feature films, The Holy Grail, The Life of Brian and The Meaning of Life, as well as the hugely popular spin off musical, Spamalot, have made the Pythons titans of British comedy. And despite that most of their output was over four decades ago, their popularity isn’t waning - in fact the Dutch city of Spijkenisse recently opened its first official Silly Walks crossing.

‘The Judean People’s Front?’, ‘No!’ exclaims Brian with exasperation, ‘The Romans!’

Asked what he believes is the key to Python’s longevity, Idle was reluctant to attribute it to one particular reason. Indeed, Python material covers anything and everything, from a dirty fork in a restaurant to alien abduction, and since anything was fair game for the irreverent troop, Jews get a look in numerous times. In the song ‘Never Be Rude to An Arab’, Jews and Israelis are classed amongst those who should never be insulted and the song, ‘Accountancy Shanty’, begins with Idle calling over the introductory music, ‘Full speed ahead Mr. Cohen!’, and ends with a further reference to Mr. Cohen.

Offensive stereotype? Perhaps, but I can’t really quibble with this as my husband is an accountant, who actually worked for a firm with ‘Cohen’ in the title. The Pythons often played on racial, religious and gender stereotypes, and these can sometimes be jarring to modern audiences, but their most enduring material is that which is of the more surreal kind, which is apparently timeless.

When it comes to Jews the most important Python work is ‘The Life of Brian’. Set in the Second Temple era at the time of Jesus’ life, the film tells the story of Brian, an ordinary Jewish man living in Jerusalem who is mistakenly dubbed the Messiah. The Python’s aim was to lampoon human credulity and hypocrisy, not necessarily Christianity, but the fierce response to the film, with towns and even countries banning it, reflected that many found it deeply offensive.

The portrayal of the Jews in the film is as about as satirical and irreverent as you can get. For instance, early on in the film we see an execution scene in which a Cohen (a Temple priest, not the accountant) is sentencing an old man to death by stoning for blasphemy. The Cohen, played by John Cleese, bedecked in turban, tallit and a breastplate of sorts, cuts a ridiculous figure trying to control the unruly crowd of women disguised as men, eventually blaspheming himself and ending up flattened by a huge stone. This is standard Python derision, and so utterly ridiculous and divorced from our sources’ accounts of the priesthood as well as Jewish law regarding blasphemy, it doesn’t even register as a critique.

The division amongst the Jews during this period is another interesting aspect of the movie, and strangely one that has helped me to visualize the discord that preceded the destruction of the Second Temple. Brian joins the dissident group the ‘People’s Front of Judea’. Reg, the leader, is extremely annoyed and irritated when Brian suggests that he is part of the ‘People’s Front of Judea’ and explains shortly afterwards that ‘the only people we hate more than the Romans are the Judean People’s Front’! Later on, we see the ‘PFJ’ (Brian’s group) in a scrap with the group Campaign for a Free Galilee. Brian tries to get them to stop fighting and unite against the common enemy when they all look up and declare ‘The Judean People’s Front!’, ‘No!’ exclaims Brian with exasperation, ‘The Romans!’

Although this is of course a very loose take on the story as we know it from Jewish sources, the ‘baseless hatred’ amongst the Jewish people at the time of the destruction of the Temple in 70CE, who had splintered into numerous conflicting factions, is the primary reason for this long and seemingly endless exile, and the Pythons seem to have captured that atmosphere.

A scene that resonates even more closely with Jewish sources is the classic ‘What have the Romans ever done for us?’ episode. While trying to deride the Roman’s contribution, Reg asks the PFJ this question, and is promptly answered by the members; sanitation, medicine, education, wine, public order, irrigation, roads, a fresh water system, and public health. A quick look in the Talmud, Shabbos, 33a, shows a surprisingly similar exchange, where the sages Rabbi Shimon, Rabbi Yehuda and Rabbi Yosei discuss the Romans. Rabbi Yehuda praises them for establishing marketplaces, bridges and bathhouses, but Rabbi Shimon protested that they did all these things for their own nefarious purposes. It’s unlikely the Pythons based their sketch on the Talmud, but interesting nevertheless to see the similarities.

There is a series of scenes that were not included in the film which deal with the notorious Judean People’s Front. The leader of the JPF is Otto, who is portrayed as a militant Zionist, with a thin black moustache and a German accent. The logo of the JPF is a Star of David with additional lines that make it resemble a swastika. The scenes were cut mainly because it was felt that they were slowing down the story, not because of their implications, although Idle said the scenes were ‘suggesting [Zionism is] rather akin to Nazism, which is a bit strong to take’, acknowledging how potentially offensive they were. Terry Gilliam believed the scenes should have stayed as, in his words, ’we've alienated the Christians, let's get the Jews now’. Discovering this now, given the virulent anti-Israel sentiments across the world, and the appalling way in which Israel haters equate it with Nazi Germany, I am grateful that these scenes were left out, but also feel somewhat betrayed by the Pythons for this material, which was sadly prescient of the Israel hating we see today.

Nevertheless, the Otto scenes were all part of the Python way of poking fun at anyone and everyone, and their resonance is more an accident than the result of any intentional anti-Semitism sentiment on the part of the Pythons.

Hopefully we can still look and laugh and enjoy the irreverent humor of the Pythons, taking the jokes about Jews with grace and, as the song exhorts, ‘always look on the bright side of life’.

The History of Hatikvah