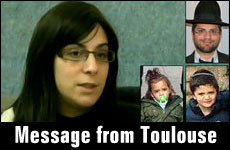 A modern-day Jewish heroine, she spoke with remarkable composure and dignity about her husband, Rabbi Yonatan Sandler, and their sons Aryeh and Gavriel, brutally murdered by an Islamic terrorist on March 25, 2012.

Eva Sandler’s fortitude in the face of horror was truly moving; her calm and brave presence in Johannesburg and Cape Town brought a message of strength and faith to us all. Although she spoke sentence by sentence through a translator, the language and cultural barriers – which by any rational analysis should have separated us into different worlds – seemed to dissolve; there was a strong sense of shared Jewish fate.

As Rebbetzin Sandler recounted the details of that terrible day, we all felt that Toulouse could have been, God forbid, Johannesburg or Cape Town, New York or London, Jerusalem or Tel Aviv. There is a shared Jewish fate which binds all Jews, in defiance of the natural laws of history.

There is a shared Jewish fate which binds all Jews, in defiance of the natural laws of history.

Rav Yosef Dov Soloveitchik, in his foundational essay Kol dodi dofek (“The voice of my beloved knocking”), identified two distinct covenants between God and the Jewish people: the “covenant of fate” and the “covenant of destiny.”

God entered into the covenant of fate with us whilst we were still subject to Egyptian slavery, when He said, “I will take you to me to be a nation.” Through this covenant we became a separate people with a shared and supernatural fate for all times, and from which there is no escape.

In the past 70 years, for example, we have seen the irresistible power of this covenantal shared fate as Nazi Germany sought to annihilate assimilated and religious Jews alike. And today the covenant of fate binds all Jews, willingly or unwillingly, to the State of Israel and to the events and pressures that accompany anything to do with it. Every Jewish community around the world has been thrust to the front lines facing the anti-Israel onslaught, which in its milder form can mean being denigrated and isolated and in its most virulent form poses a serious threat to life and limb as attested to by Eva Sandler’s tragedy.

Rav Soloveitchik explains that the covenant of fate binds us and imposes on us a moral responsibility toward one another’s welfare. Every Jew must stand in solidarity with, and help, support and protect every Jew unconditionally, irrespective of political affiliation or religious observance or any other criterion. The all-encompassing covenant of fate connects us all, giving expression to the very concept of Jewish peoplehood and unity.

The covenant of destiny goes beyond the covenant of fate which simply binds us as a nation through force of external circumstances.

The covenant of destiny, known also as “the covenant of Sinai” because it was entered into at Mount Sinai when God gave us the Torah, is about our shared values, moral vision and the Divine mission of the Jewish people. It is comprised of the Torah’s principles and values and calls us to a higher destiny, one which transcends mere survival. It is about why we want to survive, and what our purpose and moral calling is. It gives us our mission, articulating the raison d’être of the Jewish people.

Rebbetzin Sandler spoke of her life mission – to continue the work that she and her husband had been doing prior to the attack. They were teachers of Torah and leaders of their community. She spoke about their decision to return to France, after many years of yeshiva study in Israel, to give back to their community of birth and where they were raised and educated.

She spoke of her determination and commitment now to continue to promote Torah values in the world so that the terrorists who attack these values will not be granted victory.

It is this mission which brought her to South Africa; as she said, before the tragedy she could never have imagined that one day she would be in South Africa. But she accepted my invitation to Sinai Indaba, a convention dedicated to the covenant of destiny, to continue her mission of teaching Torah values and bringing a message of faith and loyalty to God.

In the context of the covenant of fate we become subjected to the overpowering forces of history; we play a reactive role, with no choice but to respond due to force of circumstances, trying simply to survive. The covenant of destiny, however, is embraced freely and chosen, as it was first entered into at Mount Sinai. The covenant of destiny gives us a sense of purpose, a sense of who we are and why we are here, and what our moral calling is in this world. It gives Divine meaning, context and imperative to the role of the Jewish people in history, and indeed to our lives as individuals.

Eva Sandler has moved beyond succumbing to despair to rising to a moral vision and calling.

It was powerful and moving to witness these ideas of Rav Soloveitchik embodied in Eva Sandler, who transcended victimhood to become a modern-day heroine. At Sinai Indaba she spoke of her pain and of her moral mission to spread the light of Torah and faith in the world, calling on us to join her. She has moved beyond succumbing to despair from tragic events to rising to a moral vision and calling, redeeming the covenant of fate through the covenant of destiny.

If we regard Jewish peoplehood as solely about physical survival and responding to external events and threats, then we lose our sense of purpose and mission which come from our Torah, given at Sinai. The covenant of fate is unconditional and all-embracing, while the covenant of destiny, rooted in Torah and mitzvot, proclaims a clear and specific moral vision for the Jewish people.

These two covenants are the framework for Jewish unity and peoplehood. The covenant of fate enjoins us to embrace and care for every Jew, no matter how different he or she is, to stand in solidarity with Jews around the world and to defend the State of Israel. And the covenant of destiny calls upon us to embrace our shared moral vision and fulfill our Divine mission.

I Am a Forgotten Jew

Crossing the Line: The Intifada Comes to Campus

What is the Mezuzah?
Extras In Our Own Epic
Evolution 2.0: The Coming Darwinian Revolution
Chukat 5782: Let’s Play the Blame Game!
Comments
MOST POPULAR IN Israel
Our privacy policy