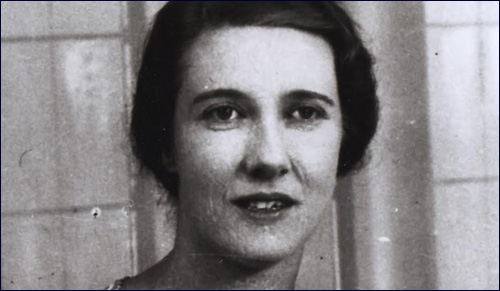 An unknown Irish heroine risked her life to save 200 Jewish children from the Nazis.

Mary Elizabeth Elmes risked her life to save at least 200 Jewish children from the Nazis and chances are you have not heard of her. She would have preferred to keep things that way.

Born in 1908 in Cork, Ireland, the daughter of a pharmacist, Mary was a highly talented student at Trinity College, Dublin, winning a gold medal for French and Spanish. Both languages proved to be of vital importance in Mary’s life.

Forsaking a potentially brilliant academic career, she was drawn to refugee relief work during the Spanish Civil War. When many of the refugees fled over the Pyrenees Mountains from Spain into France, she bravely joined them. The conditions in the refugee camps were appalling but Mary attempted to make life more bearable by organizing food supplies and providing educational books for the children. 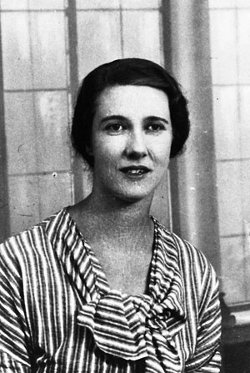 When France fell to the Nazis in 1940, thousands of Jews and others on the Gestapo death list fled to the south of the country. Many were arrested by the French police and held with the Spanish refugees in an unused army camp called Rivesaltes.

Described as unsuitable even for horses, freezing in winter and sweltering in summer, the Rivesaltes camp began to fill with refugees starting in 1941. By the end of its first year, over 4,000 people were crammed into the camp, one third of them children.

In 1942, Jews started being rounded up and sent to Auschwitz. Aware of their dangerous plight, Mary Elmes and her colleagues planned to save as many Jews as possible despite the risks. Up until then children had been exempt from deportation, but in September 1942, the Vichy authorities cruelly withdrew that exemption.

Mary immediately took action to save them, rescuing dozens of Jewish children by transporting them to safe houses or helping them leave the country. Sadly, many of those children never saw their parents again.

With quiet heroism, she hid children in the trunk of her car and drove them to safety in the French Pyrenees mountains. She helped countless others secure documents permitting them to be evacuated via an undercover network in Vichy France.

Lois Gunden, an American Mennonite aid worker in charge of a center Mary established, wrote: “Mary informed me about the return of Polish and German Jews to Poland where death by starvation awaits them. She brought us three Jewish boys in an attempt to save them when their parents had to leave; we had some time quieting one poor little fellow but finally his sobs died down.” 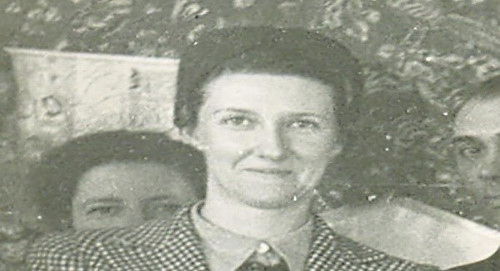 Thanks to her neutral Irish citizenship, Mary Elmes was permitted to remain in the war zone when people of other nationalities were forced to leave.

Rivesaltes became the holding center for all Jews found in non-occupied France. In the autumn of 1942, nine convoys left Rivesaltes for the transit camp of Drancy near Paris. Over 2,000 Jewish adults and 110 children were on board. Tragically, the next stop after Drancy for many of them would be Auschwitz.

“The number of children would have been considerably greater had it not been for the intervention of Mary and her assistants,” maintained one of her colleagues.

In January 1943, Mary was arrested by the Nazis on suspicion of helping Jews to escape. Charged with espionage, she was suspected of hostile acts against Germany, secret border crossings, information of all kinds, and propaganda against the Reich.

Her employers, the American Friends Service Committee, deeply distressed by the news of her arrest, immediately sent a telegram to the Irish authorities seeking help.

At first Mary was held in Toulouse prison near her colleagues who were allowed to visit and supply her with food parcels. But they lost all contact after she was transferred to the fearsome Gestapo-held Fresnes prison outside Paris.

Mary was undoubtedly aware that many of the prisoners at Fresnes were never released. Members of the French Resistance and captured British special operations executives were more often killed than freed.

Since Mary Elmes was an Irish citizen employed by the American Friends Service Committee, her colleagues in the US appealed to Robert Brennan, minister of the Irish Legation in Washington, to intervene and try to secure her release. As Ireland was a neutral country during World War II, the Germans agreed to release in July 1943. 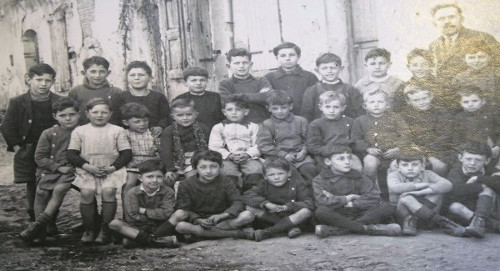 A 1943 school photo of Ronald Friend (middle row, 3rd from left) who was mixed in with local children at a school in the South of France.

In later years, Mary was typically matter-of-fact about her dreadful imprisonment, stating: “Oh, we all had to suffer some inconveniences in those days!”

Though her mother hoped Mary would then leave France, she refused to abandon the refugees who still needed her help. Fearless of the Nazis or their French collaborators, she remained working at her office in Perpignan until the war ended.

In 1947, the British and American Quakers were awarded the Nobel Peace Prize for their relief work during the war. Though the French government offered her its highest honor, the Legion d’Honneur, Mary refused it. She preferred to forget her war-time activities and resume a normal life.

She married a Frenchman, Roger Danjou, and had two children, Caroline and Patrick. While growing up, they were completely unaware of their mother’s heroism. Mary Elmes lived to a ripe old age. She died in 2002, aged 94. 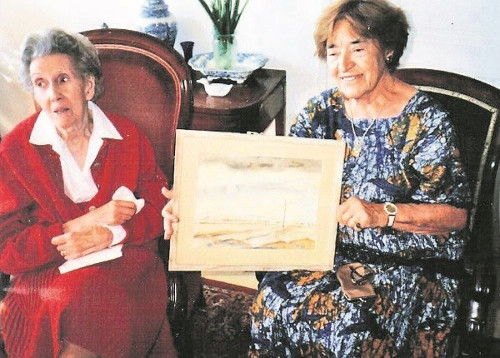 Mary Elmes (at left, aged 94) presented with a painting of the Rivesaltes refugee camp by her colleague Friedel Bohny-Reiter of the Swiss Red Cross.

In 2012, Professor Ronald Friend, one of the many Jewish children Mary had saved, contacted her family to ask their permission to nominate her as a Righteous Among the Nations. Initially reluctant, as their mother had preferred not to mention her heroic activities, Caroline and Patrick Danjou decided to see her finally recognized.

In 2014, friends, relatives and Professor Friend commemorated Mary Elmes at an award ceremony in the south of France. She remains the only Irish person to be honored by Yad Vashem. 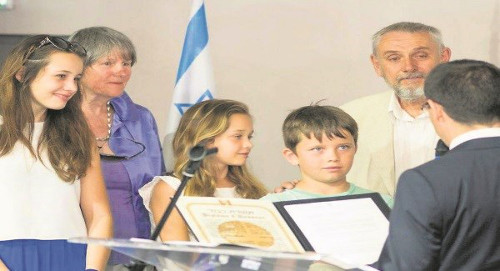 The posthumous gold medal presentation to Mary Elmes by the Israeli Ambassador to her children Caroline and Patrick Danjou and three of her great- grandchildren.

“She should be written up in history books and recognized by the Irish government,” Professor Friend says. Mary was a quiet heroine who deserves to be remembered.

Sometimes There are Tears in Color