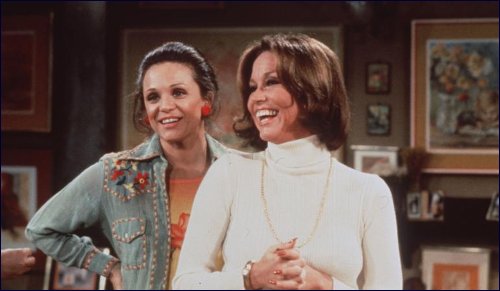 Mary Tyler Moore, who passed away at the age of 80, proved that Jewish characters could make it on their own.

To many of us Boomers, the loss of Mary Tyler Moore is personal. Back in the 1970s, Saturday night was planned around “Mary.” To miss an episode was an unthinkable screw up in our schedule.

The year was 1970. From women’s rights to confronting government, today’s Boomers ushered in a culture of change, determined to “take on the world.” In media, for Jews, it also meant the start of coming out of the ethnic closet. Jewish imagination emerging through the talent of Jewish directors, writers and authors such as, Harold Pinter, Philip Roth, Elaine May and Mike Nichols. Jewish actors --George Segal, Richard Benjamin, Barbra Streisand, and Elliot Gould – to name just a few, no longer turned to Main Street, U.S.A. for their ideas, names (or noses).

It was the right time for “Mary” … well, sort of. Network execs and producers, many of whom were Jews themselves were still echoing the TV “maxim: “Too Jewish.”

Such was the case with The Dick Van Dyke Show in the 1960s. If it had aired as conceived, Mary would have been married to a Jewish writer played by Carl Reiner, the show’s creator and producer. Would it be a hit in Boise? Walla Walla? Mableville? Maybe with a little de-Jewisizing. So the “Reiners” became the “Petries.” (Rob, played by Van Dyke, and Laura, played by Mary). While you can take the “Jewish” out of the crawl, you can’t take the “Jewish” out of the creators. The tone and sensibility was pure Reiner who also threw in one whole Jew (Buddy) who was Bar Mitzvahed (late in life) on air, two neighbors (The Helpers) who were Jewishy, and a song Rob Petrie co-wrote while in the Army called “Bupkis.” 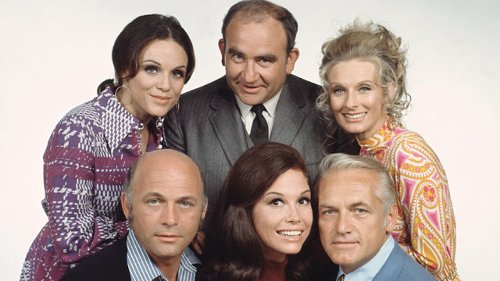 The following year, the start of the seventies, the “Too Jewish” worry continued when the world of the The Mary Tyler Moore Show included Jews “all around.” In addition to the legendary Jewish writers and producers, Ed Asner, who played her boss at WJM could be dressed in a Santa suit – and still seem Jewish with his looks, demeanor, and sarcastic sense of humor (to Mary on the premier show: “You’ve got spunk.” “I hate spunk.”) Ditto for Murray, the news writer. Although not a Jewishy character, his verbal antics were the essence of the Jewish come-back. And then of course, there was the first fully realized Jewish female since Molly Goldberg, Rhoda, Mary’s best friend (played by non-Jew Valerie Harper.) But the show went on air, despite cries of “too feisty, too much angst” (read Jewish) from the network. And for the first time, we Jewish girls saw ourselves up there. We understood Rhoda, we delighted in her (our) dilemmas, we were proud of her mouth, we adored her determination – and this Jewish New York character didn’t have to yell “Oy Vey!” to convey her heritage. If we admired and held Mary as a role model, it was Rhoda who personified who we were.

“Living in New York, I knew more Yiddish than most of my (Jewish) friends.” – Valerie Harper

If Rhoda (and her mother Ida, played by another non-Jew, Nancy Walker) exhibited ethno-typical traits, their origin could also be considered “New Yawkese.” Brash, wildly and hysterically insecure, sarcastic, witty, Rhoda would often say the “unsayable” providing the perfect foil for the very proper Mary – who nevertheless “got it” even if she couldn’t say it. Gentile and Jew, as bffs, “yinned” to each other’s yang.

MTM went full throttle on issues that were emerging and controversial. In one particular episode, “Some of My Best Friends Are Rhoda,” when a new pal enters Mary’s life and excludes Rhoda from playing tennis at her restricted country club, we see something highly unusual for the day. Mary from Minneapolis (actually Rosedale) comes upclose and very personal with anti-Semitism, kicking the “friend” out the door.

The reasons this show is revered is impossibly simple. The key was “characters.” From the start, the show was about human beings instead of “one-liners.” The humor, situations, and pathos came from layered, complex characters who were fascinating, familiar, and flawed. MTM, the production company started by Mary and her then husband, Grant Tinker, armed with some of the most brilliant, mostly Jewish writers in the business, forged new territory with these intrinsically authentic characters who didn’t need to chew the scenery to get a laugh.

This was critical in portraying a Jewish female. Rhoda was no one’s shtick character spouting Yiddishisms. She wasn’t wearing her ethnicity Borscht Belt style. Her flaws, her insecurities, her humor, her vulnerability, and her “let it all hang out” ‘tude resonated across ethnicities.

And we fell in love with her.

With MTM behind her, Valerie Harper as Rhoda became a spin-off, and the first modern-day Jewish Star Character of a sitcom.

Under Mary Tyler Moore’s banner, Jews were uncloseted, and shown without fear, but rather joy over being a vital part of American culture.

In the farewell episode, before exiting, Mary talks about her colleagues, ending with: “… last night, I thought, ‘What is a family, anyway?’ They’re just people who make you feel less alone and really loved. And that’s what you’ve done for me. Thank you for being my family.”

And to Jewish boomers, thanks to Mary Tyler Moore and the team at MTM … we were finally fully realized – as family.

We will miss you Mary.