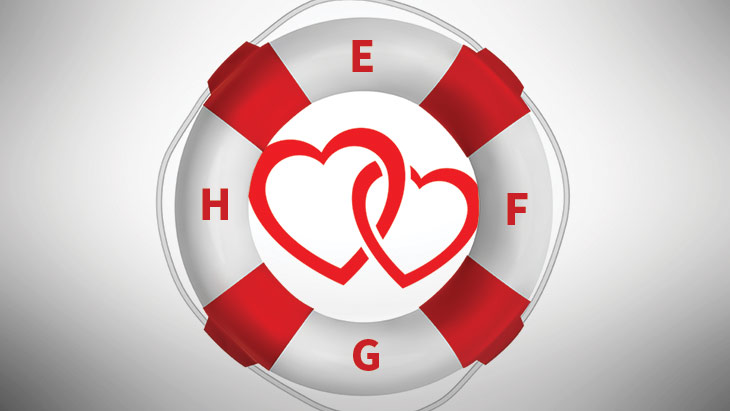 From empathy to hope, more practical advice on improving your marriage.

Following my first article, I received several requests for a continuation of the alphabet. Below are the E, F, G, and H of the 50-day Marital Survival Guide. Your comments are greatly appreciated.

It is normal to want to help your spouse soothe when they are upset. Telling them to “calm down” doesn’t work. It is simply another way of conveying that you feel they are overreacting. Dr. John Mordechai Gottman suggests that the goal is not to try to fix your spouse's feelings but to communicate that you understand and accept them. This is empathy.

There is a well-known question: Why did God give us two ears and one mouth? The answer: so that we can listen twice as much as we speak. Here is sound advice for productive conversations: be interested, not interesting.

Men, do you want to make regular deposits in the Care Bank? Ask your wife each morning what you can do to make her day easier.

Engage the services of a qualified pro-marriage therapist earlier than the norm of two years that most couples wait before seeking professional help. Why pro-marriage? Because some therapists will proudly proclaim, "I'm not about saving marriages, I'm about helping people." My slogan is the opposite: “I'll be the last person in the room to give up on your marriage."

What do couples argue about most often? Nothing. It turns out that most arguments are not about topics; they are about failed bids to connect. That’s fancy wording for "nothing" says Gottman, as illustrated in this example using the television remote control. The husband is changing channels on the remote as they’re watching television together on the couch. The wife says, “Leave it on that channel.” The husband responds, “I will but let me just see what else is on.” She counters, “No, leave it on that channel.” He says, “Fine!” Finally she declares, "Well the way that you said 'fine' hurt my feelings.” He effectively ends the discussion by retorting, “I don't even want to watch television with you now.” What was this couple arguing about? Nothing, or like stated above, failed bids to connect.

The greatest danger of having a child-centered family is that when the children leave home, often the marriage does too. Empty nesters know this well.

Second is the danger that even if the couple stays together after the children leave home, they may feel diminished as a couple. One couple that I counsel told their adult children "We were a great mom-dad team but a lousy husband-wife team."

The third danger is benign but still regrettable. Some couples work on fixing their marriage after the children leave home and make significant progress. This is positive but sad for two reasons: many years of unmet marital potential, and even more important is the lack of good marital role models for their children (Dr. Bill Doherty).

The most important thing a father can do for his children is to love their mother (Theodore Newburgh).

You are not going to feel "in love" all the time. If you want to recapture that magic from when you were in love, be loving (Dr. Frank Pittman obm).

You hear the phrase "forgive and forget" so often that the two become equated with one another, when in fact, they have nothing to do with each other. Just because you have forgiven someone and given up the desire to take revenge does not mean that you have forgotten the event ever happened (Michelle W. Davis).

The weak can never forgive; forgiveness is the attribute of the strong.

This is a combination of affection, loyalty, love, respect, and trust (Oxford Dictionary). Friendship is an infinitely more stabilizing basis for marriage then romance. Get good at friendship before you even think about falling in love (Pittman).

Men and women tend to experience intimacy differently (Dr. Helen Fisher). Women experience intimacy from face-to-face contact; they use the "anchoring gaze". This comes from thousands of years of mothers holding their babies in front of their face. Women tend to draw closer, face each other, lock eyes, and proceed to reveal their hopes, worries, and details of their lives. Men are not going to look deeply into another's eyes because this is foreign to them. Men experience intimacy by working or gaming side-by-side. This male approach to intimacy probably also dates back thousands of years. Fisher suggests that in order to build intimacy with a man, a woman should do things with him that are side-by-side so that he isn't threatened by her gaze.

Gestures like diamond rings and weekends in the Caribbean are not as effective as smaller daily gestures.

Gradual is the key to successful change. Drastic change like huge swings of a pendulum tend not to be enduring.

Surprisingly, correcting your spouse's grammar in the middle of a disagreement can be considered contempt which is the most harmful form of communication. Who’d have thunk it?

Rabbi Dr. Abraham Twerski heard this at an Alcoholics Anonymous meeting and it helped him to rid himself of resentment. “Harboring resentment is like allowing someone you don't like to live inside your head without paying rent....and I'm not that nice a guy.”

I never met someone who wants their spouse to raise his or her voice. It is contemptuous because the spouse feels and acts superior. It is putting oneself on a higher plane looking down from a position of authority, with an attitude of I am better/ smarter/ neater/ more punctual than you. Gottman asserts that contempt is the single best predictor of relationship dissolution. It is for this reason that I give every spouse who I counsel permission to yell only these three words (when applicable) “Fire! Get out!”

When hope is lost, all is lost. Be hopeful that all your efforts at nurturing your marriage will bring you true and lasting Shalom Bayis.

Eat, Pray, Love, Then What?

3 Secrets to a Long and Happy Marriage

Keeping the Spark Alive in Your Marriage: A Man's Guide
Blessing on Chewing Gum
Was Rahab a Prostitute?
Extras In Our Own Epic
Comments
MOST POPULAR IN Family
Our privacy policy