Sometimes Divorce Is Not the Answer 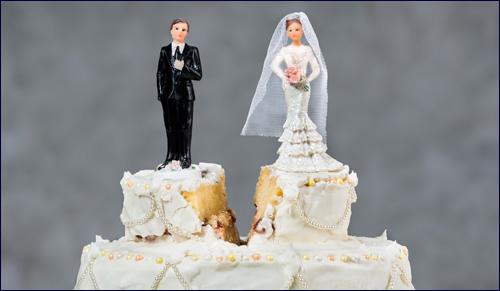 Lack of commitment to the marriage is the #1 reason for divorce. What would happen if both partners decided to work on their marriage instead?

We all know the daunting statistics about divorce in the United States – roughly every other married couple will get divorced, and 60% of second marriages will end in divorce. While Judaism believes that divorce is an option, it should not be taken lightly. A recent national survey showed that divorced people cited a lack of commitment to the marriage as the number one reason for divorce. Imagine what might have happened if both partners had decided to work on their marriage.

In a study done in Utah, 31% of the men and 13% of the women wished they had worked harder to save their marriage. 74% of these men and 65% of these women also said that they wished their spouse had worked harder to save their marriage! Ironically, after going through the stress and turmoil of divorcing, one in three couples regret their decision enough that they try to reconcile.

Marriages that have the 3 A’s – adultery, addiction, and/or abuse – are usually not worth saving unless serious steps are being taken to remedy those issues.

When counseling people who are considering divorce, I explain that divorce is good for solving some issues but not others. Infidelity is a factor is roughly half of divorces. Marriages that have the 3 A’s – adultery, addiction, and/or abuse – are usually not worth saving unless serious steps are being taken to remedy those issues.

In many cases, people think that love begins by magic. When it fades or leaves (as is inevitable for most couples, at least from time to time), they think that means the marriage should end. Wrong! It is often a sign that one or both partners aren’t doing what it takes to keep love alive. Marriages take work. They don’t happen by magic and don’t stay vibrant without investing in them.

Gary and His Secretary

Gary was a 40-year-old successful businessman who had everything going for him. He was smart, cheerful, and a loving father to his three young daughters. He and his wife seemed to be the perfect couple. Yet he confessed to me, “I fell out of love with my wife some time ago. My secretary is beautiful, smart, a great listener and wonderful conversationalist. We speak a lot to each other during the course of the day and over the past six months I’ve fallen in love with her. When I come home to my wife – rarely before 9pm – she serves me dinner after I’ve worked a long day. She greets me in her pajamas and doesn’t have much to contribute to our conversations except for talking about the kids and that day’s problems. She’s tired when we’re together and she doesn’t bring much excitement to our relationship.

“So, I came to get your opinion – what do you think about my divorcing my wife and marrying my secretary?”

“Do you ever stop to think how she feels taking care of your children all day? She waits for you to come home to make her day more interesting. How would you feel immersing yourself all day in diapers, getting spit up on, cooking, feeding kids, bathing and getting them dressed, playing with them, and comforting them when they are sick all night? She is going above and beyond to make and serve you dinner at 9 o’clock at night.”

Gary was speechless. I continued, “Next, have you thought about what will happen to your kids, and to their relationship with you, if you get divorced? If you start investing the time, attention and energy to your wife that you are giving to your secretary, and do the kinds of things that made you feel close to your wife when you were dating, I’m sure that you can get your marriage back on track. You, your wife and your kids can only benefit from that.”

Gary was stunned. I didn’t know if my words had any impact on him. He left my office and never came back. I assumed it was because I told him things that he didn't want to hear.

A few years later, I ran into Gary and his wife at a charity dinner. He came up to me and said, “I just want to thank you for preventing me from ruining my life. My marriage has never been better, I am so in love with my wife, and we just had another baby.”

It was my turn to be stunned. Apparently, Gary took to heart what I said and turned around his marriage.

It’s common for people who are unhappily married to imagine how things will be so much better if they get divorced. But people take themselves with them. If they haven’t mastered the skills of being married to a first spouse, they are likely to repeat the same problems with a second.

People who contemplate divorce are usually unhappy, but the main reason may not be because of their spouse. People need to make themselves happy. If someone can’t be happy by him- or herself, they will usually be miserable after getting divorced. While many people feel relieved shortly after getting divorced, that feeling usually fades after a few weeks or months when it is replaced by other feelings, including loneliness.

If you are considering getting divorced, try the following:

2. Doing things that involve giving to others are usually much more fulfilling than doing things only for yourself. That might mean spending more time, or spending time differently with your children. If you don’t have kids who need your parenting, consider working in a soup kitchen or packing food for those in need. Tutor immigrants, underprivileged kids, or mentor someone in a field where you have experience. Visit senior citizens who are lonely. Volunteer at a local hospital. The more you make connections with people and do things you enjoy now, the better off you will be whether you stay married or not.

3. Treat your spouse now as if s/he were someone you would like to date. If you stay married, it can't hurt. If you get divorced, you'll be practiced in how to date again.

4. Ask your spouse what s/he would like you to change in order to have a better marriage and try to do those things. If you change in those ways, does your partner also change in ways that you would like?

5. Do what it takes to become a cheerful person. Work out your anger, disappointments, regrets, and poor sense of self and become someone who expresses gratitude, radiates warmth, and has mostly positive things to say. Research shows that happy relationships have 5 times as many positive comments as neutral or critical/negative ones. Making these changes will keep you from being unhappy, lonely and bitter if you get divorced, and can totally change your life and marriage now.

6. Imagine what you would like your relationship to your kids to look like now and in the future and do those things now.

7. Getting divorced in order to remarry is risky. There is no guarantee that you'll find someone, and all too often, remarriage brings its own problems with it. That’s why second marriages have a 60% divorce rate. Older people tend to have health problems. Anyone can have emotional baggage, difficult children, hidden agendas, emotional and financial issues, etc. It is often better to try to live amicably in a less than ideal marriage than to try to have a better marriage with someone else. Every relationship has problems. You need to ask yourself: whose problems are you best equipped to deal with?

8. Finally, think about the person you would ideally like to marry. Become the person that you think s/he would like to marry. When you live that way, it can only make you into a better and happier person no matter what happens, and it very well may make your marriage better.

Dr. Lisa Aiken has been a psychologist who works with individuals and couples for nearly 40 years. She has authored and co-authored 11 books on a variety of Jewish topics, including Guide for the Romantically Perplexed. She has also given talks to diverse audiences in more than 250 cities on six continents.

4 Small Investments to Improve Your Marriage

4 Easy Habits to Strengthen Your Love

PODCAST: Accepting the Person I Married

A Dying Father's Last Message about Love
G-d Time
Shavuot is The Holiday of Cheesecake and Blintzes
What Does Kosher Mean Literally?
Comments
MOST POPULAR IN Marriage
Our privacy policy