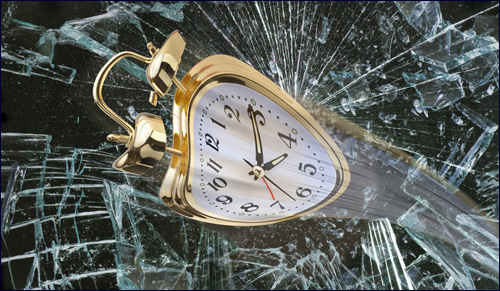 Even the seemingly inconvenient occurrences are part of a larger plan.

It was a sunny December day in Woodmere, New York, where we lived at the time. Little did I know how close we were to disaster.

Our son woke from his afternoon nap later than usual, so we had to rush out of the house to make it to the local Chabad’s “Chanukah Wonderland” activity.

They had rented out an entire storefront and the place was packed, with a line forming down the street. We parked and waited quite some time to enter with our impatient two-year-old. The wait felt like an eternity.

Our turn was finally next. When we reached the entrance desk, the woman excused herself to use the restroom. “I’ll just be a minute,” she explained apologetically. After she returned, I fumbled to find our checkbook in my huge diaper bag. At the very bottom was my checkbook, drenched in liquid from my son’s sippy cup. Unbeknownst to me, his milk had been leaking through the bag and had even soiled my skirt!

We quickly paid cash and then I calmly paused, took off the bag, and did a quick wipe down. After everything was clean, we could finally enter.

My husband held our son in his arms and began walking towards the moon bounce that our toddler was pointing to excitedly. As they walked ahead, something caused me to stop. Unexplainably, my feet planted, and I couldn’t bring myself to move. When my husband realized I wasn’t with him, he hesitated, turned around, and took a few steps to walk back to me.

At that moment, in the exact spot my husband had been standing with our son, a huge SUV came bursting through the glass wall of the storefront and continued driving into the Chanukah Wonderland. The car sped right past my husband’s arm, knocking everything down in its path.

The place looked like a bomb scene. People ran out of the car’s way and in milliseconds, the room emptied. After making sure my son and I were out okay, my husband went back in to pick up a toddler that was being trampled on by adults and brought her outside to safety.

We were sure it was a terrorist’s attack, targeting Chabad. After all, it happened just weeks after the Chabad of Mumbai incident.

But it wasn’t an attack; it was an accident caused by a 76-year-old man. The carpet in his car got twisted between the pedals as he was frantically trying to push on his brakes. The more he pressed down on the brake, the harder the rug pushed on the accelerator.

Miraculously, no one died from the incident. A friend of mine was sitting in a seat rocking her baby in the stroller to her right. She picked up the baby to nurse and moments later the car drove into the stroller, causing it to fly in the air. She too missed the car’s wrath by less than two feet.

One man was run over by the car and it took the strength of 12 people to lift it off him. He was injured but eventually recovered.

Chanukah was certainly filled with miracles that year.

I often think of all the small inconveniences of that day that ended up saving our lives. Our son slept later than usual, and we waited an extraordinary amount of time in line. The woman who happened to need to use the restroom. And milk spilt on my leg. Had we already been inside even moments before, we could have been injured, or worse. All these moments of delay that we were initially annoyed about ended up saving us.

I think about this story when I encounter inconvenient delays – the detour, the missed flight, the long wait in line – and tell myself “I am precisely where I am supposed to be at this moment.”

A similar story happened to my grandfather during WWII. He was fighting for the American Army on the ground in France. They reached a house with a white picket fence and marigolds all around. The house looked serene and seemed to be a perfect place to hide for safety. Little did they know it was a decoy and it hid land mines laced with bombs throughout the property. My grandfather experienced a premonition of danger and did not want to open the picket fence. Despite his commander’s orders, he simply refused to obey. His refusal saved his life.

The bomb went off the moment the door was opened. I am here today, along with my children and hundreds of cousins, aunts, and uncles because of his premonition.

We may not always see how, but even the seemingly inconvenient occurrences or inexplicable premonitions are part of a larger plan.

A version of this article appeared in The Jewish Home

This article is one of many that appears in Sarah Pachter’s book Small Choices, Big Changes published by Targum Press. The book has timeless teachings through the lens of Torah consisting of over 60 chapters covering universal topics such as happiness, success, relationships and parenting. Click here to order the book.