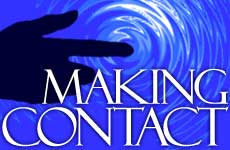 How can we perceive the Infinite while stuck in a finite world?

We have a fundamental problem in trying to grasp what it means to be beyond time and space, because all our mental conceptions exists within time.

When imagining eternity, all we can muster is an image of something reaching back through the tunnel of history and stretching forwards towards the future. But that's not eternity. Because eternity is beyond time, not within it.

How can a finite being grasp the infinite? How can a blind person understand color?

How can a finite being grasp the infinite? How can a blind person understand color?

The answer lies where the two dimensions intersect.

Edwin Abbot's novel "Flatlands" describes a two-dimensional world where everything is completely flat. Depth and height do not exist in this sphere. There is only length and width.

Imagine living in this flat, two-dimensional universe. What would we see of each other? Just a line. Big lines and small lines, depending on the width of the person or object. There's no room for anything else.

However beyond this flat world is another dimension – the third dimension, where things have a strange quality called depth and height.

The people living within the two-dimensional world do not have the capability to grasp what it means to be three-dimensional. They are stuck in their limited dimension. Everything they perceive is two-dimensional.

Imagine a three-dimensional finger crossing through a flat world. How would it appear?

However, they can relate to the finger that exists in another dimension. They can perceive partial aspects if this three-dimensional realm as it intersects their two-dimensional world. But a complete understanding is beyond them.

Similar barriers exist between the finite and the infinite. We exist in the finite world, imprisoned by time and space. Therefore it is impossible to grasp the full essence of the infinite dimension.

WHAT THE INFINITE ISN'T

Since we are part of the finite realm, we can understand and define properties that make something finite. We know that finite entities have boundary and limit. Therefore anything that exists in space must be by definition finite – since it is bounded and contained within space. We can take the next logical step and conclude that the infinite (which by definition does not have finite properties) is not bounded and does not exist within space. If it did it would be finite, not infinite.

By drawing the defining line between the infinite and finite, we get a whiff of a completely different dimension.

This approach describes what the infinite "isn't" – by negating qualities that are inherently finite. This is exactly what the word 'infinite' literally means: in-finite, not finite. By drawing the defining line between the infinite and finite, we get a whiff of a completely different dimension.

WHAT THE INFINITE IS

When talking about what the infinite is – eternal, all-powerful, all-encompassing – the very words we use are finite. We struggle to describe the infinite in the positive sense – since the only language we have is by definition inadequate.

[God's simplicity] is really far beyond the grasp of our understanding and imagination, and there hardly exists a way to express it and put it into words. Our intellect and imagination are only capable of grasping things bound by the natural limitations created by God, since these are the only things that our senses can detect and convey to our minds. (Rabbi Moshe Chaim Luzzato in The Way of God 1:1:5)

The Talmud teaches that the Torah speaks in the language of man. Any perception of God must be filtered through a finite lens - therefore we can never truly describe the essence of God. All we can do is employ human metaphors (e.g. "the fingerprint of God") to describe God from our finite point of view using our finite language.

Of course no anthropomorphic terminology is complete and accurate, yet it is still meaningful in describing our relationship with God, giving us an effective means to perceive how the infinite dimension relates to the finite world.

If You Were God
Megillah Gorilla Saves the Day
Challah Reuben “Grinder”
Big OnThe Little Things
Comments
MOST POPULAR IN Spirituality
Our privacy policy
Aish.com Is Looking for Great Writers