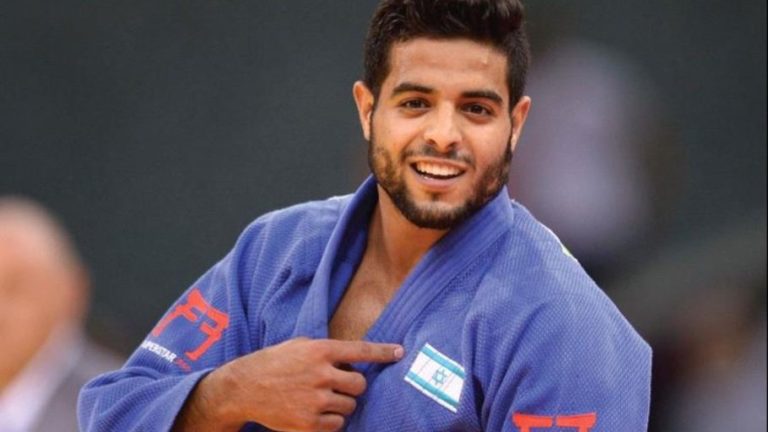 Last week Israeli Judoku star Sagi Muki made history as he stood on the winner’s podium at the Abu Dhabi Grand Prix with his gold medal flashing in the lights as Israel’s national anthem was played for the first time in an Arab country that does not officially recognize her right to exist.

Aish.com spoke to the 26 year old rising star from Netanya, about winning in an Abu Dhabi, making history and what it means to him to be a gold medal winning Israeli sportsman.

Aish.com Sagi, what was it like to compete in Abu Dhabi? 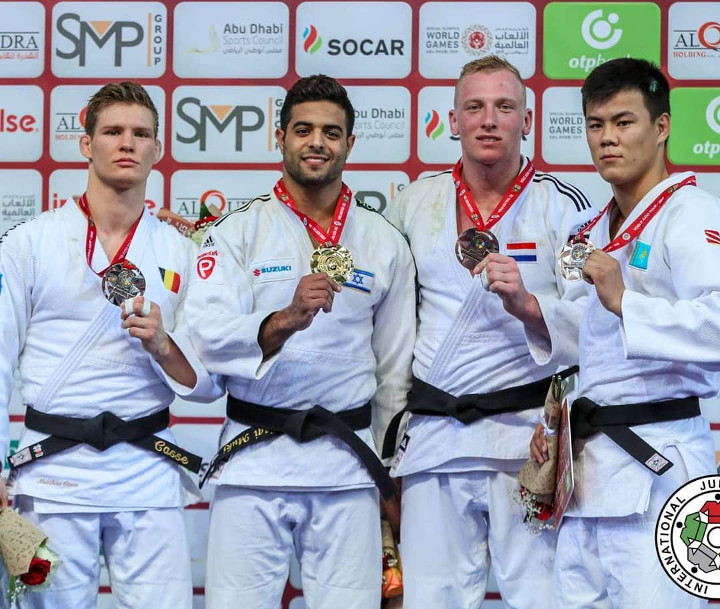 Sagi: It was special opportunity because when I won the bronze medal in the same competition in 2015 they refused to let me compete under the Israeli flag, instead I had to wear an international Judo federation kit. This was the first time I was able to compete under the Israeli flag and as a result I felt a huge lift of motivation. Because of the politics some countries have against Israel and the fact that some don’t recognize Israel at all, I feel that wherever I compete in the world, I am fighting for my country.

Aish.com: Did you feel the weight on your shoulders to win?

Sagi: On the road to the final I had won all of my fights by ippon, which is a judo knockout move, but in the final I was definitely more cautious. I felt very focused, I didn’t rush and I waited for the period of extra time called ‘golden time’ where a single move can win the match.

Aish.com Seconds after you won, you pointed the Israeli flag on your judo shirt towards the camera. What was going through your mind? 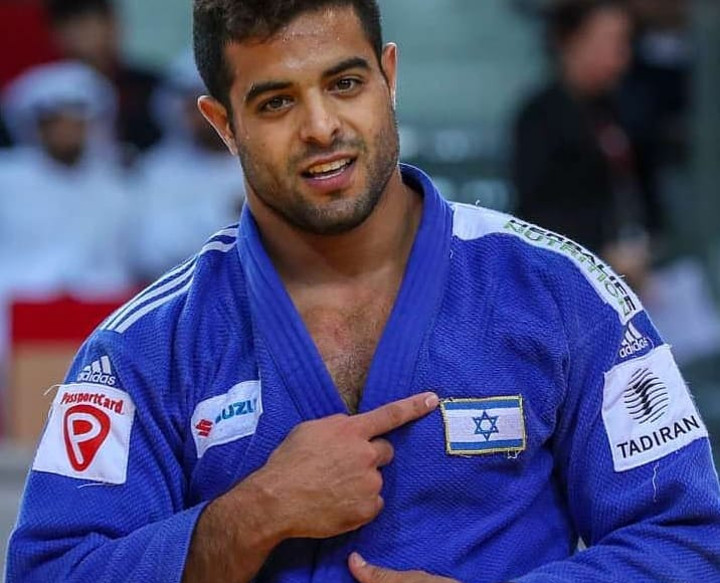 Sagi: When I win I point to the flag at every competition, not just in Abu Dhabi. I am very connected to my country and very proud to be an Israeli. I feel within my judo, I have a sense of mission in Hebrew we say a ‘shlichut’, like I’m on a special mission for my country.

Aish.com When you won, did you realize it would make headlines?

Sagi: The moment I won was so big for me, but it was only when I came back to Israel that I found what it meant to Israelis here. When I came back, people were literally hugging me in the street and treating me like a hero. 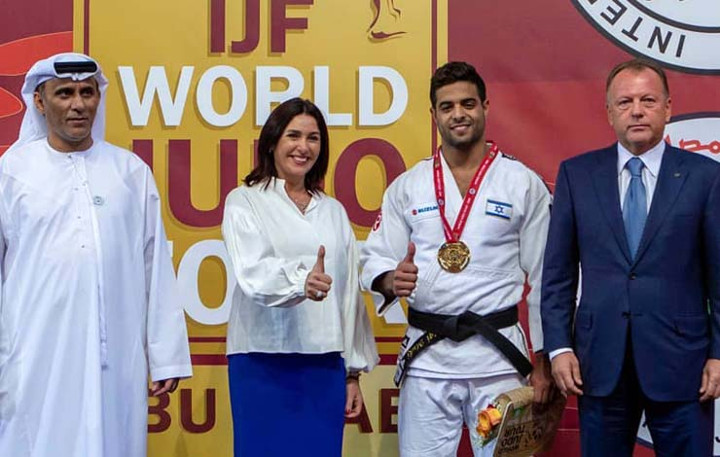 With Miri Regev, Minister of Culture and Sport

Aish.com What was it like standing on the podium hearing the Hatikva being played in Abu Dhabi? You had an Israeli Minister in tears, what was going through your mind?

Sagi: It was very special – I only saw that Miri Regev was crying when I watched the ceremony back in the hotel afterwards. I was very emotional and I think it gave people a lift in motivation in what can be achieved. My family sent me videos of Israelis back home who were watching who stood up for the Hatikva and everyone was in tears. It was an amazing moment.

Aish.com Prime Minister Netenyahu invited you to his office when you returned. What did he say to you? 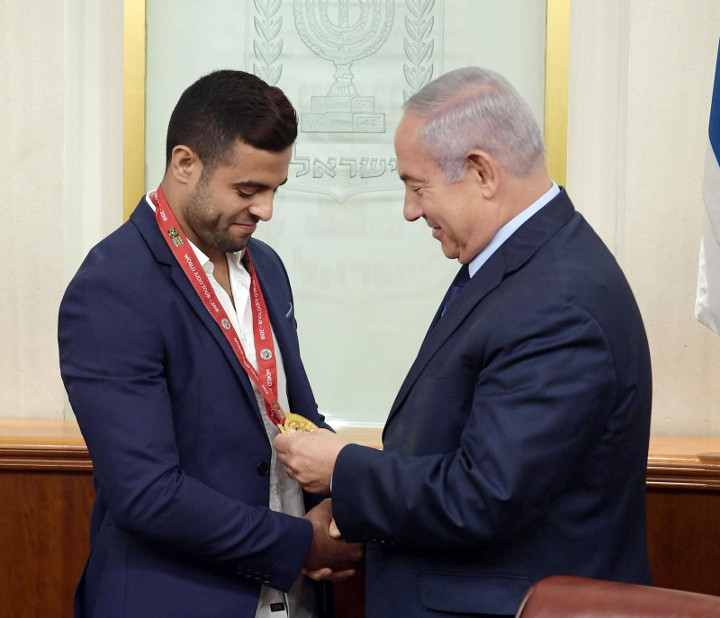 Sagi: He actually called me by phone right after I won in Abu Dhabi and told me it was a big achievement for the whole country. He had just returned from Oman a few days earlier where he had spoken about Israel extending friendship to the Arab world, so he said winning in Abu Dhabi was a help in achieving this. When we came back to Israel, I also went to meet him along with other athletes who were also in Abu Dhabi. He gave me a big hug and said he wanted to do more to support the success of judo in Israel.

Aish.com You travel all over the world representing Israel. What are your relationships like with competitors from Arab or Muslim countries you meet on the competition circuit?

Sagi: I don’t want to go into details of each country but let’s say some of them put politics aside and are respectful and some follow their country’s line and look at us as differently even at times with anger in their eyes. Some are my friends, and it really is the case sport is helping to break through new paths in politics especially in terms of communications and especially with the Arab World. I hope we can keep doing this in this way. When we make a difference it's a victory for sport over politics.

Aish.com What’s next for you Sagi? Is there anything big ahead of the Tokyo Olympics in 2020?

Sagi: My next goal is the Judo Masters in China at the end of December where only the top 16 ranked judo competitors are invited to take part.

Aish.com Where are you ranked at the moment?

Sagi: Until 2017 I was competing in the under 73 kg weight category, and reached third place in the world until I wanted a harder challenge. I chose to move up to the 73-81 kg class and when you change classification you start the ranking from zero. In the new category I am ranked 8th, so I have my eyes set on the Masters tournament.

Aish.com Lastly, with the rise in anti-Semitism in many countries around the world, it makes a big impact to see an Israeli athlete in such a physical sport winning gold medals. Do you have a message to Jewish People who have difficulties expressing their Jewish identity?

Sagi: I’m a very proud Israeli, and I feel connected to Jews from all round the world. My family is originally from Yemen, my great great grandfather was one of 12 leaders of the Jewish community in Yemen who helped arrange for whole Jewish community of Yemen to move to Israel after the State was created. I know that in many places today Jewish people feel that they need to hide their Jewish identity and that it’s better not to stick out or be recognized as Jewish. And you know what, I feel it too when I compete in some places, you get looks, and it’s not so easy.

I know that feeling, but we are a strong fighting nation. We have proved that since 1948 when Israel was established and before that as well all throughout our history. We need to focus on ourselves and on our beliefs on who we are, what we love, the people we love and not get distracted by people who want to harm us. When I have difficulties that get in my way I respond by carrying on living my life and the things that I believe in.

Aish.com We wish you continued success and many more gold medals in the future!

I Was Raised for Jihad

Gush Katif: Seven Months Later
Deep Breaths
What Happened to the Truth?
The Japanese Everything Bagel Spice Recipe
Comments
MOST POPULAR IN Israel
Our privacy policy