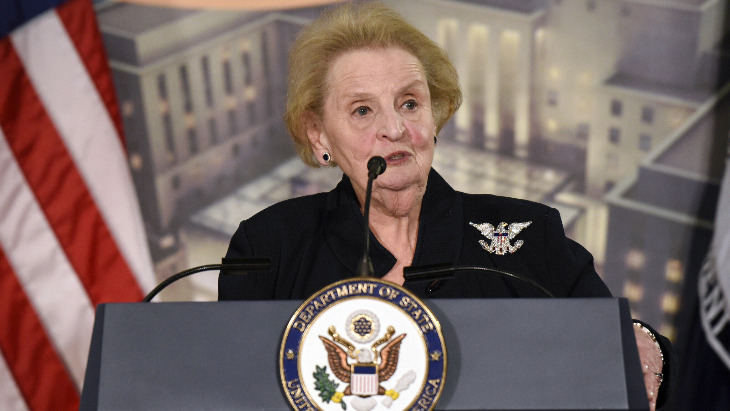 The former Secretary of State, who has just died, discovered she was Jewish at age 59.

In 1996, when Madeleine Albright was being considered by US President Bill Clinton to be his Secretary of State, she was asked many questions about her eligibility by State Department officials.

Born in Czechoslovakia, Albright explained how her family fled to London in 1939 when she was just two years old, staying there for the duration of World War II. She explained how afterwards, her family returned to Czechoslovakia, where her father, Josef Korbel, worked as a diplomat and an academic. A fierce opponent of Communism, he moved his family abroad again in 1948, settling in Denver. (In a strange historical coincidence, one of Prof. Korbel’s favorite students was a brilliant young student named Condoleezza Rice, who would one day become the US’s second female Secretary of State, after Albright.) 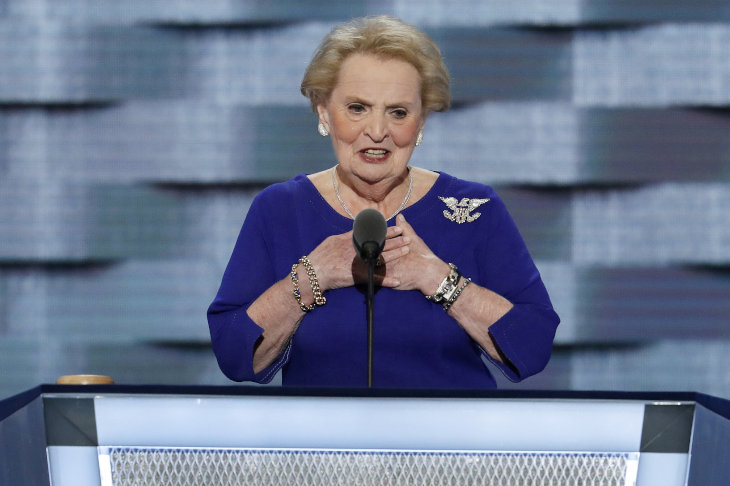 Albright’s family became naturalized American citizens. She worked as a journalist and after gaining a Ph.D. in International Relations from Columbia University, she entered politics, eventually becoming a member of the National Security Council staff under President Carter. Fluent in Czech, French, Russian, Serbo-Croatian and Polish, Albright had already served as Clinton’s ambassador to the United Nations, where she advocated a muscular approach to peacekeeping, criticizing Cuba after it shot down two small airplanes owned by an American charity, and condemning the 1994 ethnic violence in Rwanda as genocide.

When she was asked if she had anything more to add, Albright said she’d recently received letters from people with information about her family’s fate in Czechoslovakia during the Holocaust. “It’s conceivable that I’m of Jewish background,” Albright explained.

The Washington Post published a bombshell article that revealed Albright’s Jewishness and that three of her grandparents were murdered by the Nazis.

The State Department officials were dismissive of this news. “So what? The president is not antisemitic,” they responded. A month later, the Washington Post published a bombshell article that revealed Albright’s Jewishness and that three of her grandparents were murdered by the Nazis, as well as dozens of her cousins and other relatives.

“Here at age 59, I thought I knew everything about myself,” she wrote in her memoir Prague Winter: A Personal Story of Remembrance and War, 1937-1948, which Albright published in 2012, long after she’d left office. She grew up in a Roman Catholic home. (She’d later find out that her parents “converted” to Catholicism when she was five years old.) In 1959, Albright had converted to Episcopalianism to marry her husband Joseph Medil Albright (they had three children and divorced in 1982.)

She recalled how she’d become increasingly curious about whether her family was Jewish. As US Ambassador to the United Nations, she was a well-known figure and people who’d known her family in Czechoslovakia had written to her, telling her about her relatives. Suddenly, Albright wrote in Prague Winter, “in January 1997, before we had time to explore further, a hardworking Washington Post reporter, Michael Dobbs, uncovered news that stunned us all: according to his research, three of my grandparents and numerous other family members had died in the Holocaust.”

Many critics were scathing, dismissing Albright’s assertions that she hadn’t realized her family was Jewish. How could a sophisticated, knowledgeable woman who’d studied International Relations and traveled extensively throughout Europe not possibly realize that her parents had been Jews? How could she never have questioned her family’s deadly fate during the Holocaust?

I suspect that my parents thought life would be easier for us if we were raised as Christians instead of Jews.

“I was shocked and, to be honest, embarrassed to discover that I had not known my family history better,” she wrote. It was a stance Albright never disavowed. She always maintained that she hadn’t known that her family was Jewish until the 1990s. “I suspect that my parents thought life would be easier for us if we were raised as Christians instead of Jews,'' she later explained.

Albright began to cautiously embrace her Jewish identity during the most hectic time in her life. “About the time I became Secretary of State,” she wrote in her book Hell and Other Destinations: a 21st Century Memoir (published in 2020), “I learned that my heritage was Jewish and that more than two dozen members of my family, including three grandparents, had died in the Holocaust… When I said that I had been unaware of these facts, many commentators accused me of lying and suggested that for reasons of personal ambition, I had taken pains to conceal my Jewish ancestry. This was a mortifying accusation that left me feeling helpless and yet made no sense…” 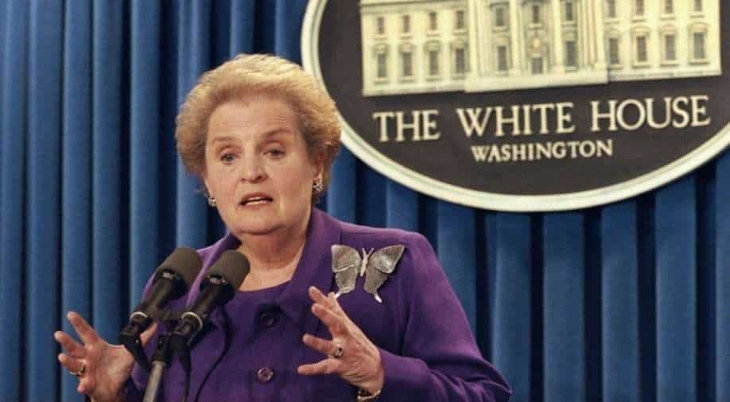 She wrote of her intense guilt at realizing that this essential fact was only now being recognized. Her brother John and sister Kate immediately traveled to the Czech Republic to visit their parents’ birthplaces. “Given the demands of my new job, I could not travel with them at the time, but instead flew to Prague in July (1997), where I saw the names of our family members inscribed on the interior walls of the Pinkas Synagogue, along with those of more than 77,000 other Czechoslovak Jews who had perished during the war. With the help from local Jewish officials, we were able to form in our minds a general outline of what our ancestors had gone through during the Nazi occupation…”

While she pieced together her family’s history – and digested the scope of the secrets her parents had kept from her – Albright was traveling the world, helping mediate an end to some of the globe’s most pressing disputes.

After leaving office in 2001, after serving 14 years as Secretary of State, Sec. Albright opened a consulting firm, wrote several books, and taught at Georgetown University. She also continued to explore her family’s Jewish history and document her own transformation. Albright spent years researching the fate of many of her dozens of relatives who were murdered in the Holocaust. After she published Prague Winter, many people who’d known the relations and family friends whose stories she’d uncovered in the book reached out, and Albright had another series of intense experiences, meeting more people who’d known her family.

Years after learning she was Jewish, she celebrated Hanukkah with her grandchildren

When she first found out that she was Jewish in 1997, Albright described feeling distant from the Jewish community. “I am a firm admirer of the Jewish traditions but could not – beginning at the age of 59 – feel myself fully a part of it,” she wrote in Prague Winter. Yet over time, Albright began to embrace her identity as a Jew.

In a 2012 interview with CNN’s Wolf Blitzer, Albright said “I have reasons for gratitude that my origins are richer and more complex than I had thought; but still, I wish my parents would have explained to me, when I was old enough to understand, what they had done. I would like to have had a chance to discuss every aspect of their deliberations.” She said that finally, years after learning she was Jewish, she celebrated Hanukkah with her grandchildren

Denied the opportunity to talk frankly about her family’s Jewishness while her parents were alive, Albright painstakingly researched her family’s lost history. In her final years, learning about her Jewish family took up much of her time. “I…felt driven to learn more about the grandparents whom I had been too young to know,” she told Mr. Blitzer, “especially by then I had become a grandparent myself.”

While the world mourns Madeleine Albright as one of the last century’s most high profile political actors, her grandchildren are mourning their more personal loss of their Jewish grandmother who loved them.

Coronating the King: 4 Ways to Prepare for Rosh Hashanah
The 21st President of the United States: Failure or Inspiration?
Hiding Their Jewishness
The Jewish Pope: Following the Questions Home
Comments