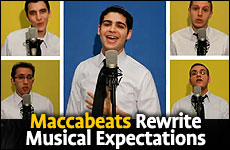 YU a cappella group atop Billboard charts, adored by media.

Just as the Maccabees continued the Chanukah wars long after the eight days of flames disappeared into a wisp of smoke, the story of the Maccabeats — an a capella group formed by Yeshiva University students — and their Chanukah video continues to dazzle even as the holiday fades.

The story of the Maccabeats and their Chanukah video still dazzles even as the holiday fades.

Here are the numbers: The Maccabeats’ “Candlelight” video now has more than 3,294,000 hits on YouTube. By comparison, Sarah Silverman’s widely reported “Great Schlep,” on behalf of candidate Barack Obama in the 2008 presidential campaign, tallied slightly fewer than 2 million hits. Since its October debut, the highly praised video directed by Hollywood director Judd Apatow for American Jewish World Service — a video starring Jerry Seinfeld, Lindsay Lohan, Sarah Silverman, Tracy Morgan and Andy Samberg, among others — has been seen 960,000 times on YouTube, according to The New York Times (Dec. 10).

The Apatow AJWS video represents all that is trendy in Jewish communal life, a search for a non-threatening, non-religious entry into Jewish life for the unaffiliated. As Mark Oppenheimer reports in the Times, “Mr. Apatow’s video offers Judaism detached from synagogue observance or ritual piety…”

There is more than one gate into Jerusalem. The Maccabeats are proving that the oldest gate — the Orthodox gate — is still wide open enough to let three million through.

In the Maccabeats video, all 14 of the all-male Maccabeats are wearing yarmulkes, sometimes outer tzitzis, and yeshivish-style open-necked white shirts and dark ties. Their director, Uri Westrich, a YU graduate, is in medical school, not Hollywood, and their musical director, Julian Horowitz, who founded the group in 2007 as a freshman, has detoured into financial planning on his way to YU’s rabbinical school.

The name Maccabeats was adopted several years ago, as a play on YU’s nickname for its sports teams, the Maccabees, rather than for the Chanukah’s heroes, though this has become a Chanukah they’ll always remember.

“We basically wanted to hit our target audience of the Orthodox Jewish community in New York,” Westrich told The Washington Post about “Candlelight.” Three million hits gives us a pretty good idea of how viable that Orthodox community can be.

The lyrics to “Candlelight,” by Maccabeats David Block and Immanuel Shalev, aren’t reduced to interfaith pablum, but utilize such untranslated phrases as “al hanissim,” “Maoz Tzur,” “nes gadol hayah sham,” along with a “great return to Torah learning.”

As the group declares at www.maccabeats.com, “Strongly committed to the philosophy of Torah u-Madda,” the Modern/Centrist Orthodox slogan found on the Yeshiva University seal, meaning “the integration of traditional and secular wisdom, the Maccabeats perform an eclectic array of Jewish, American, and Israeli songs.” The synthesis is apparent in the music the Maccabeats adopt, and obviously listen to, from Leonard Cohen’s “Hallelujah” to Taio Cruz’ “Dynamite.”

Are the Maccabeats — or their massive audience — a story? Most Jewish newspapers don’t seem to think so, for reasons worth wondering about. But in the last three weeks here are some of the major media outlets that did jump on the story, and positively: CNN, CBS, Time, The Wall Street Journal, the Washington Post, The New York Times, the New York Post, the Today Show, the Huffington Post, Yahoo Music and the Jerusalem Post.

On the radio, the Maccabeats have been played on WPLJ and Z100.

As of Dec. 8, Billboard’s charts posted “Candlelight” as No. 2 on its Comedy Digital Tracks, and No. 9 on its Holiday chart. (“Candelight” is considered a comedy track because it is a parody of both Cruz’ “Dynamite” and Mike Tompkins’ a capella and video version).

With Adam Sandler’s “Chanukah Song” No. 1 on the comedy charts, Billboard reports that “Chanukah-themed titles monopolize the top two positions on a Billboard songs survey for the first time.”

Part of the Maccabeats’ appeal to “amcha” — the Jewish street — is that these yeshiva guys have recaptured Chanukah from the Jewish grinches, who for too long have monopolized Chanukah coverage with “December Dilemma” stories or cynicism masked as sophistication.

A typical example of the latter is a column in the Times (Nov. 30) by Howard Jacobson, the British author who won this year’s Booker Prize for “The Finkelstein Question,” about anti-Semitism in England. Chanukah, he writes, “is lovely, but what’s the festival itself for? What does it do? … Jewish children celebrating Chanukah feel short-changed alongside their Christian friends gearing up for Christmas…”

Jacobson briefly tells the “bones” of the Chanukah story but adds, it “struggles to find a path to Jewish hearts … I’d like it if we had better songs to sing at Chanukah, too….”

That, in spite of songs such as the defiant “Mi Yimalel,” to nearly a dozen wonderful songs by Debbie Friedman. There’s nothing wrong with “Maoz Tzur” either, even if Jacobson dismisses it as less interesting than “Rudolph the Red Nosed Reindeer.”

Before the Maccabeats phenomenon exploded, Matisyahu blogged on National Public Radio that “Jewish musicians might feel more inclined to make Chanukah music if they knew that someone would actually want to listen to it.”

That was three million hits ago.

With success, and requests for bookings from across the country, musical director Horowitz admits to being “a little overwhelmed.” The group, says Horowitz, started laying down the audio tracks in October, on its own recording equipment, “in an apartment on [West] 187th Street, where three of our guys live.”

The video was posted on the Friday after Thanksgiving. “We had everyone in the group choose five Jewish blogs and send the video to them,” says Horowitz. “Before that Shabbos, we had a couple of hundred hits.” By the next week, they had several hundred thousand. “People were posting it on their [Facebook] walls. It was a social networking, grass-roots thing.”

Are the lyrics – “I flip my latkes in the air sometimes, singing ay-yo” — particularly clever? No, and neither were the lyrics to “Twist and Shout.” The music to “Candlelight” is not original, and the Beatles didn’t compose “Twist and Shout,” either. What’s magnetic in both cases is the almost raucous, unapologetic joy exuded by the singers.

What’s also compelling is how different the Maccabeats are from the musical world. Dennis Prager, the talk-show host heard locally on 970 AM, noted in Jewish World Review (Dec. 7), that among the Grammy nominations for 2011’s Record of the Year, two of the other four nominees are rap songs, says Prager, “whose lyrics are also vile.” The Maccabeats on the other hand, imagine a better place.

That the Maccabeats, without tattoos, without thug-like preening, without being crude, are as popular as they are yet another reminder that these YU kids are, in many ways, the best of us.

This article originally appeared in the Jewish Week

Superman vs. the Nazis: How Comics Influenced American Public Opinion

The Secret Chord: The Complex, Heroic Act of Forgiveness
What Makes Eli Run?
The Tyranny of Materialism
Science Enters the Mysterious Inner World of Consciousness
Comments
MOST POPULAR IN Jewlarious
Our privacy policy