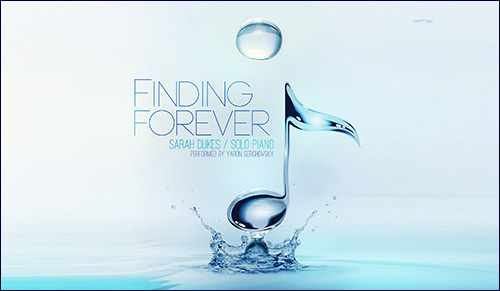 It was only after I gave up demanding perfection from myself that I was able to share my unique music with the world.

Piano lessons began at age six and continued throughout high school. After the excitement of learning a new instrument wore off, I found myself experimenting with the piano, as my fingers curiously explored the keys and their sounds. It wasn’t long before I discovered that it was possible to create an unlimited number of melodies and harmonies that went way beyond the notes found within my piano books. The piano suddenly became a magical device as I realized it was a powerful tool that could be used to weave an infinite amount of stories and emotions.

I began turning to the piano as a way to express myself. It became my outlet. When I was excited, angry, or confused, I would be drawn to the piano and release my emotions through its keys. I began composing. The songs were simple, yet sincere. The compositions became my journal and the piano keys were the pen. My songs burst from my heart, almost uncontrollably.

My family and friends loved my music and encouraged me to play whenever possible. They said I inspired them, but I never believed them. My background in music had trained me in the theory and ‘rules’ of music, and I knew that my compositions didn’t follow many of them. When I write songs, I need to feel completely free to release my emotions without feeling “boxed in” by structure or theory. I don’t restrict myself by paying much attention to the ‘grammar’ of music or composition.

It was because of my “lack of rule following” that I never believed my music was “good enough”. How can one be inspired and fall in love with music that doesn’t follow the rules? It was this seed of self-doubt that continued to inhibit me throughout my education and even through the first few years of marriage. People would ask me to play for them and I would oblige, but the reality was, I felt embarrassed of my songs. People would try to convince me to make a CD, and I would immediately respond with a resounding refusal. A CD?! Besides for my family and close friends, who would be interested in it? My songs were definitely not “perfect enough” to share with the world. I was sure of it.

“Your talent is God’s gift to you. What you do with it is your gift back to God.”

And so, my music remained in my immediate social circle and may have remained there forever had I not happened upon a quote by famed lecturer and teacher, Leo Buscaglia. A quote which elicited a complete paradigm shift regarding my music ad life in general. Dr. Buscaglia once said, “Your talent is God’s gift to you. What you do with it is your gift back to God.”

And that is when I realized I had been disillusioned. I had fallen into society’s destructive mentality which suggests that only those who are “perfect” can be successful, respected, and valued. One has to look perfect, dress perfectly, and produce perfect results, and anything less than that is simply not good enough.

Each person is given unique capabilities and leanings for a purpose. I realized that God gave me a specific talent and I was keeping it to myself as if I was unappreciative of His unique gift to me. My fear of imperfection suddenly seemed silly.

I soon discovered that it is not necessarily perfection that people want, but rather sincerity and genuineness. My songs may not always follow the proper ‘grammar’ of composition, but they all come from the heart, and like the Torah teaches us, what comes from the heart enters the heart.

I now understand that I may not be able to do everything, but I can do something. As Jews, we are taught that every single person has a part of God that shines within. The Torah compares the Jews to stars. From a distance, stars appear to be tiny and insignificant; pinpricks of light. However, in reality, each star is an enormous globe of fire with immense power and energy.

Every one of us is a star – someone who has incredible power to make a difference in the world. We may sometimes feel insignificant compared to the rest of humanity but in truth, every single person deserves to be cherished, valued, and respected. You are not only surrounded by stars, but you are one as well. You are brilliant. You have the power to have an impact on the lives of others through your own unique qualities and skills. You matter.

With that inspiration in mind, the process of creating my CD began. After several years of work, together with support from family and friends, “Finding Forever” has now been released and will hopefully inspire others to believe in themselves and utilize the talents that God gave them.

Listen to Star Catcher, a song from Sarah Dukes CD, in the video below.

Sarah Dukes' first CD of original piano solos, titled Finding Forever, is played by world-renowned pianist, Yaron Gershovsky, and can be purchased through iTunes, Amazon mp3, or by visiting www.sarahdukesmusic.com Sarah’s songs can be heard on Jewish radio stations, and have been used in various films and documentaries, including those produced by Jewish Educational Media. Sarah’s piano solos offer listeners soothing, melodic arrangements bursting with an emotional energy that is unmistakably straight from the heart. Stay updated on Sarah's new music and performances by joining her fan page at www.facebook.com/sarahdukesmusic

The College Essay I Didn’t Submit

The Glass Cow
In the Shadow of David and Goliath
Where Do the Laws of Nature Come From?
Saadiah Gaon, Rashi and Maimonides: How Three Rabbis Revolutionized Judaism
Comments