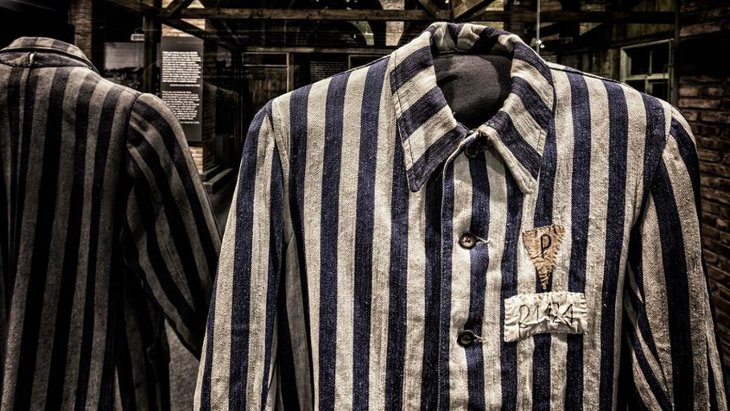 An acclaimed exhibit about Auschwitz is stirring debate about essential lessons of the Holocaust.

And praise the “Auschwitz. Not Long Ago. Not Far Away” exhibit currently at the Museum of Jewish Heritage in Manhattan has garnered in abundance. It has received massive news coverage in both print and electronic media.

First shown in Madrid, where it drew some 600,000 visitors, the exhibit will be in New York into January before moving on.

Among many writers who experienced the exhibit and wrote movingly about its power was reporter and author Ralph Blumenthal. In the New York Times, he vividly described the artifacts that are included in the exhibit, which includes many items the Auschwitz-Birkenau State Museum in Poland lent for a fee to the Spanish company Musealia, the for-profit organizer of the exhibition.

Mr. Blumenthal wrote that the museum, within sight of Ellis Island and the Statue of Liberty, had to alter its floor plan to make room for large-scale displays like a reconstructed barracks. Outside the museum’s front door, there is a Deutsche Reichsbahn railway cattle car parked on the sidewalk, placed there by a crane. 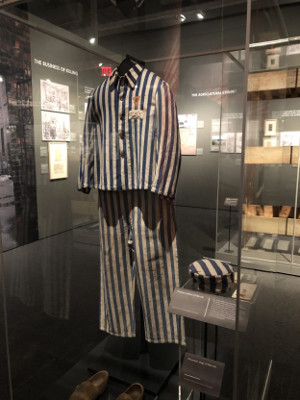 Inside, among the 700 objects and 400 photographs and drawings from Auschwitz, are concrete posts and barbed wire that were once part of the camp’s electrified perimeter, prisoners’ uniforms, three-tier bunks where ill and starving prisoners slept two or more to a billet, and, “particularly chilling,” an adjustable steel chaise for medical experiments on human beings.

There is a rake for ashes and there are heavy iron crematory latches, fabricated by the manufacturer Topf & Sons There is a fake showerhead used to persuade doomed victims of the Nazis, ym”s, that they were entering a bathhouse, not a death chamber about to be filled with the lethal gas Zyklon B.

And personal items, like a child’s shoe with a sock stuffed inside it.

“Who puts a sock in his shoe?” asks Mr. Blumenthal. “Someone,” he explains poignantly, “who expects to retrieve it.”

Another essayist, this one less impressed by the exhibit – at least in one respect –is novelist and professor Dara Horn, who teaches Hebrew and Yiddish literature.

Writing in The Atlantic, Ms. Horn approached the exhibit carrying in her mind the recent memory of a swastika that had been drawn on a desk in her children’s New Jersey public middle school and the appearance of six more of the Nazi symbols in an adjacent town. “Not a big deal,” she writes. But the scrawlings provided a personal context for her rumination on her museum visit.

In her essay, titled “Auschwitz Is Not a Metaphor: The new exhibition at the Museum of Jewish Heritage gets everything right – and fixes nothing,” she recalls her visit to Auschwitz as a teenager participating in the March of the Living, and reflects on Holocaust museums, which she characterizes as promoting the idea that “People would come to these museums and learn what the world had done to the Jews, where hatred can lead. They would then stop hating Jews.”

And the current exhibit, she notes, ends with a similar banality. At the end of the tour, she reports, “onscreen survivors talk in a loop about how people need to love one another.”

To do justice to Ms. Horn’s reaction would require me to reproduce her essay in full. But a snippet: “In Yiddish, speaking only to other Jews, survivors talk about their murdered families, about their destroyed centuries-old communities… Love rarely comes up; why would it? But it comes up here, in this for-profit exhibition. Here is the ultimate message, the final solution.”

“That the Holocaust drives home the importance of love,” she writes further, “is an idea, like the idea that Holocaust education prevents anti-Semitism, that seems entirely unobjectionable. It is entirely objectionable.”

Those sentences alone would make the essay worth reading. And the writer’s perceptivity is even more in evidence when she writes:

“The Holocaust didn’t happen because of a lack of love. It happened because entire societies abdicated responsibility for their own problems, and instead blamed them on the people who represented –have always represented, since they first introduced the idea of commandedness to the world – the thing they were most afraid of: responsibility.”

Mount Sinai is called that, Rav Chisda and Rabbah bar Rav Huna explain in the Talmud, because it is the mountain from which sinah, hatred, descended to the nations of the world. (Shabbos 89a). One understanding of that statement is precisely what Ms. Horn contends. The moment the Jewish people received the Torah, anti-Semitism came to the world as well.

The Shofar of Auschwitz

The Birth of the Israeli Air Force