The legendary actor embraced his Jewish identity later on in life.

Kirk Douglas has died at the age of 103. He was one of the last of the stars of Hollywood’s Golden Age. Here are seven Jewish facts about Douglas and his star-studded career.

Kirk Douglas was born with the name Issur Danielovitch. His parents Herschel and Byrna immigrated from Russia to the United States, in part so that Douglas’ father could escape forced servitude in the Czar’s army. The family settled in the small town of Amsterdam in upstate New York, near Albany. Douglas was one of seven children and the only boy, born December 9, 1916. He and his sisters grew up speaking Yiddish at home.

Textile mills were the town’s main employers, but they refused to hire Jews. Douglas’ father worked as a ragman, buying and selling scraps of cloth. “Even on Eagle Street, in the poorest part of town, where all the families were struggling,” Douglas later recalled, “the ragman was on the lowest rung on the ladder… And I was the ragman’s son.” 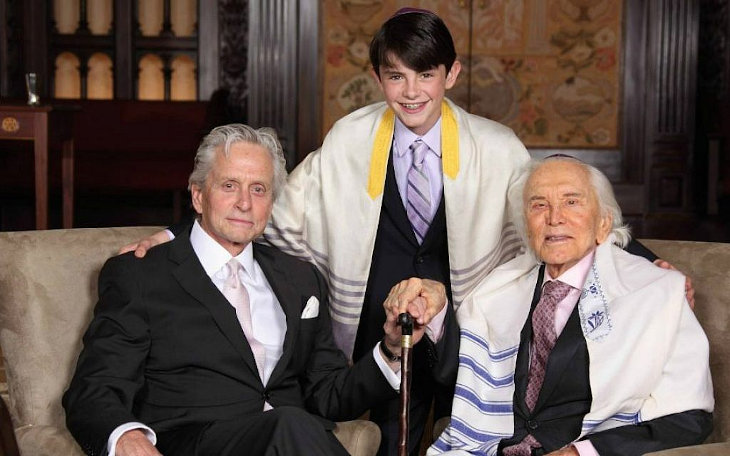 Despite his family’s poverty, Douglas recalled that they always tried to help those in need. “Sometimes we didn’t have enough to eat, but very often there would be a knock at the door and it would be hobo wanting food, and my mother always gave them something,” he recalled. “My mother said to me, ‘You must take care of other people.’ That stayed with me.”

Douglas picked up spare jobs while he was still in school; he estimated that he probably worked about 40 jobs before going away to college. Anti-Semitism was a constant threat. “Kids on every street corner beat you up,” he remembered. He was so bright that members of Amsterdam’s small and impoverished Jewish community considered pooling their resources to send Douglas to rabbinical school, but Douglas refused. “I wanted to be an actor ever since I was a kid in the second grade” Douglas later explained. 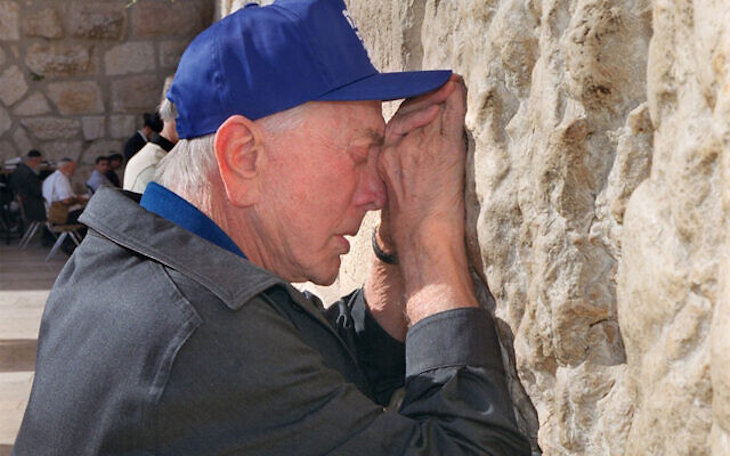 After high school, Douglas hitchhiked to Canton, New York, where he took out a loan to attend St. Lawrence College. Douglas discovered acting in college, working in regional theatre. During the school year, he was a star wrestler – but was rejected by college fraternities because he was Jewish. Douglas eventually became Student Body President, the first time a Jew held that position at Sarah Lawrence College.

Douglas soon found fame in Hollywood. His first big break was the 1946 classic The Strange Love of Martha Ivers, in which he played a weakling who witnesses a murder. In his heyday, Douglas appeared in up to three movies a year, often with some of the biggest names in Hollywood. 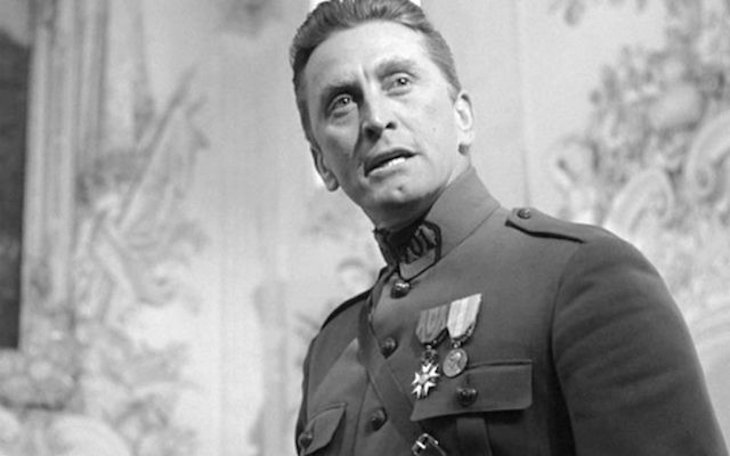 Douglas in Paths of Glory

In 1955, he set up his own production company, naming it Byrna Productions after his mother. Byrna Productions produced some of Douglas’ most well-received movies, including Paths of Glory (1957), Spartacus (1960) and Seven Days in May (1964). “When I think of my mother, who couldn’t read or write, a legal peasant from Russia,” Douglas later mused to a Hollywood Reporter journalist before breaking into a grin and sharing a fond memory, “I took her in a limousine to Times Square, and I stopped the car, and I said (gesturing towards a massive billboard above), ‘See Ma? BYRNA PRESENTS THE VIKINGS! And my mother said, ‘America – such a wonderful land!’”

Douglas and his second wife Anne became one of Hollywood’s leading philanthropic couples, establishing the Douglas Foundation, and donating a total of about $100 million to charitable causes. Beneficiaries include playgrounds in poor areas of Los Angeles and Jerusalem, synagogues, and the Kirk Douglas Theatre at Aish HaTorah in Jerusalem, which provides visitors to the holy city with educational films about Jews and Judaism.

For much of his life, Douglas was not religiously observant. Neither his first wife Diana Dill nor his second wife Anne Buydens were Jewish, and for many years Douglas seemed not to ponder his Jewish identity – though he did always make a point to fast on Yom Kippur each year. 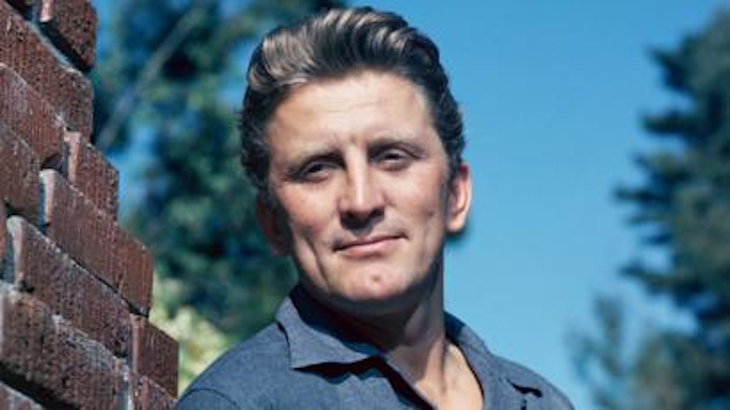 That changed in 1991, when he was seriously injured in a helicopter crash. Two younger men died and Douglas was left with serious back injuries: his spine was compressed three inches in the trauma. As he lay in terrible pain in the hospital, Douglas began to think about what his life was all about. The meaning he was searching for, he thought, seemed to be in Judaism. “I came to believe that I was spared because I had never come to grips with what it means to be Jewish” he later explained. 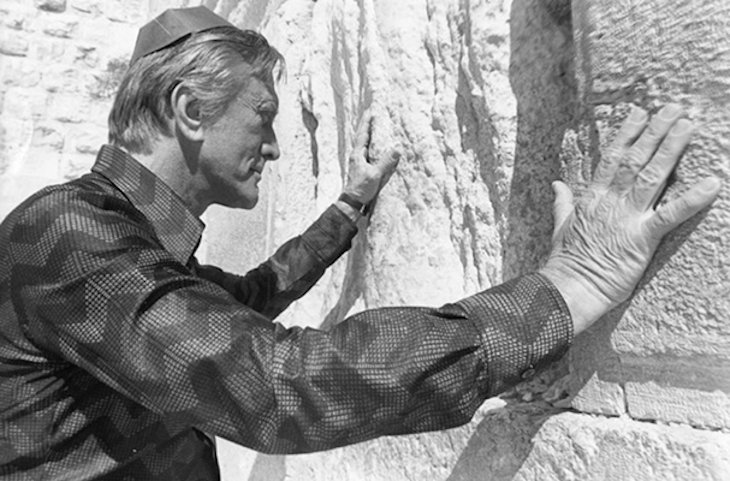 Douglas began studying Torah, and even held a second celebration of his bar mitzvah – at the age of 83.

In addition to his stellar acting career, Douglas also worked as an author, penning twelve books (one co-authored with his wife Anne), including some on Jewish themes. In 1997, Douglas published The Broken Mirror, a novel about the Holocaust aimed at younger readers. He followed that up in 1999 with Young Heroes of the Bible, which re-tells stories from the Five Books of Moses for children.

Kirk Douglas’ son Michael has publicly spoken out about his connection with his Jewish heritage. In 2015, he wrote about a terrible experience his son Dylan had while on vacation in Spain: a fellow hotel guest, spying the Jewish star that Dylan was wearing, started yelling at the boy. Michael confronted the man, pointing out why it was wrong to attack a child sporting a Jewish symbol. “Afterward,” he recalled, “I sat down with my son and said: ‘Dylan, you just had your first taste of anti-Semitism.’” 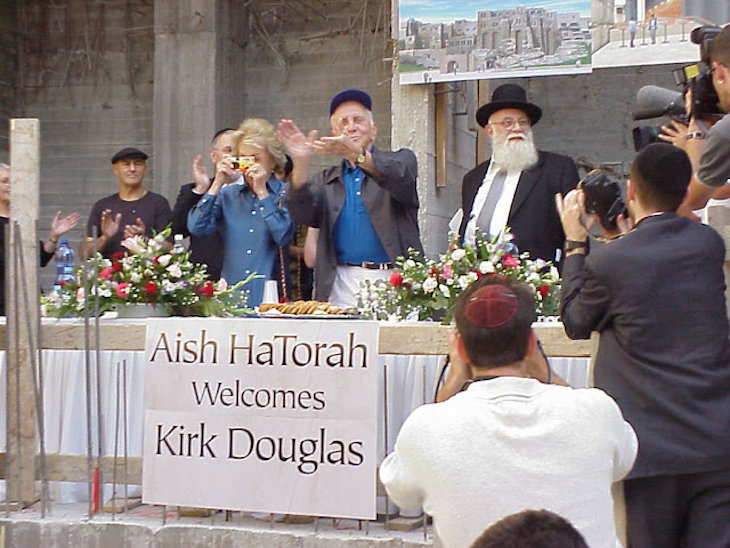 “With little knowledge of what it means to be a Jew,” Michael wrote about himself when he was a child, “I found myself passionately defending the Jewish people. Now...I have to defend my son. Anti-Semitism, I’ve seen, is like a disease that goes dormant, flaring up with the next political trigger.”

In 2015, Michael Douglas was awarded the Genesis Prize in Jerusalem. Sometimes called the “Jewish Nobel Prize”, the award came with a cash prize, which Michael donated to the Jewish Funders’ Network and to Hillel International, the Foundation for Jewish Campus Life. As he accepted the award, Michael referred to his father Kirk, then 97, sitting in the audience. Speaking of his love of his Jewish heritage, Michael noted that it “is as deep as my genes” from his beloved father.

After Kirk Douglas’ death was announced on February 5, 2020, Israeli Prime Minister Benjamin Netanyahu spoke for many when he said “Israel mourns the loss of Kirk Douglas, a legendary actor, a proud Jew and a great friend of the Jewish state.” The entire Jewish world mourns Douglas, a talented actor who wasn’t afraid to begin exploring what it meant to be Jewish, even later on in life.

Michael Jackson and My Yarmulke

Queen Esther Cleans for Pesach
It Takes A Lot Of Faith To Be An Atheist
How Instagram Brought Back This Nostalgic Soup
What Makes Eli Run?
Comments
MOST POPULAR IN Spirituality
Our privacy policy