Jonah and the Whale 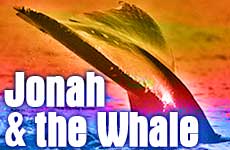 Jonah is read on Yom Kippur, teaching us about our spiritual voyage.

Jonah was a prophet who lived in the first Temple period. His first mission was given to him by the most famous of first Temple prophets, Elisha – he was to anoint Jehu as king in the year 705 BCE. His were stormy times; the Jewish people were trapped in a pattern of spiritual decline that ended with first the conquest and expulsion of the Ten Tribes by the Assyrians in 607 BCE, and finally with the destruction of Jerusalem, which was followed by 70 years of exile.

As a prophet, Jonah knew far better than we can imagine what the inevitable end would be if no transformation would take place.

After the failure of his second mission, to rebuke Jehu's successor, Jeroboam the second, he was given his final mission.

The mission that God gave him was one that he could not open his heart to accept. He was sent to the capital of Assyria, Nineveh, to urge its population to repent. How bizarre the assignment sounded to him! His own people were falling uncontrollably into a chasm that seemed to have no bottom, yet he was sent to save others – the archenemies of Israel!

Jonah actually dreaded success of this mission far more than he dreaded failure. How could he bear to witness the contrast of the Assyrians returning to God in the face of his prophecy, with the Jews stubbornly resisting any chance for spiritual self-preservation. Therefore, he attempted to escape from his destiny.

Jonah fled from Israel by ship to silence the voice of prophecy that can only be heard in the Holy Land. But a storm at sea forced him into the recognition that no one can escape from God. In the midst of calm waters, his boat was tossed in a tempest until it was on the verge of breaking. The sailors prayed to their gods.

He knew the truth. It was he who had already cut himself off from God; there was nothing to say and nothing to pray for.

His apathetic behavior aroused the curiosity of the sailors. He told them his story. He believed in God, yet he was running away from Him.

Knowing he was the cause of the storm, he implored the sailors to toss him overboard so they could save themselves. As decent people they resisted this suggestion until the critical moment when it became clear that within seconds they would all die. At that point, they listened and threw him into the turbulent depths. The storm abated immediately. Jonah thought his story had ended.

But it had just begun. He was swallowed by a whale, and miraculously survived. In the dark fetid innards of the whale, he recognized what he had never truly been willing to see, in his most exalted moments of prophecy, God's intimate knowledge and care over each life and each moment. He was a prophet and awareness of God was not a novelty to him. But recognition of the depths of God's mercy was.

It was then that Jonah did teshuva – he repented, returning to God and the best in himself.

Now he recognized that no matter how painful the contrast between the Assyrians and the Jews would be to him, that God's motivation could only be one of mercy. Once he recognized this truth, he was willing to open the gates that he had closed so resolutely – the gates of prayer. He was now ready for the most significant undertaking of his life.

The whale spit him out at the shores of Nineveh.

He told the residents of Nineveh what awaited them: In forty days they could either make radical changes in their lives, or the city would be destroyed by God's wrath.

The changes in Nineveh happened with speed and drama. The king himself led the people into a total reformation. Nineveh's destruction was postponed for 40 years.

Everything that Jonah had feared had come to pass. The contrast that he dreaded was more vivid in reality than it was as a prophecy. He had only one further request that he be spared of seeing the destruction of his own people, which he knew would come eventually and at the hands of the Assyrians at that. The fact that the Jews would not take example from Nineveh would be the final act of callousness that would seal their fate. God did not answer Jonah's request with words. He answered by deed.

After Jonah left Nineveh, he went to the outskirts and made himself a shelter in the shade of a kikayon tree. It was a source of consolation to him in his anguish, and made him aware of God's compassion. But God sent a worm to eat through the branches and kill the tree.

In response, all the pent up feelings of agony poured forth from Jonah's lips. God replied "You took pity on a kikayon for which you did not labor ... Shall I not take pity on Nineveh, that great city in which there are more than 120 thousand people who do not know their right hand from their left, and many beasts as well?"

In short, what God was telling Jonah is the flaws of the residents of Nineveh did not make them unworthy of life. Each person is part of the world's spiritual ecology, and brings benefit to the world at least as much as the kikayon plant brought benefit to Jonah.

Yalkut Shimoni, the most encyclopedic of all Midrashim (written by Rav Shimon Hadarshan in the thirteenth century) gives us deep insight into the most profound recognition of Jonah's life:

At that moment he fell on his face and said, "Rule your world according to the attribute of mercy" as it is written "to You, God, is mercy and forgiveness."

The message of Jonah's prophecy is one for each one of us. The Vilna Gaon tells us that Jonah's journey is one that we all make. We are born with a subconscious realization of the fact that we have a mission. We seek escape, because our mission is often one that we are afraid to attempt.

In the text of the Jonah story we are told that the places that he sought were Yaffo and Tarshish. While these places actually exist and are known as Jaffa and Tarsis, the literal meaning of the names of these cities are "beauty" and "wealth."

We comfort ourselves externally, by escaping from our inner knowledge of our mission through the pursuit of wealth, and by surrounding ourselves with beauty. Our bodies are compared to Jonah's ship. We face moments in life in which the fragility of our bodies is inescapable, as in when we face illness, or confront moments of danger that seem to last an eternity until they are resolved.

The sailors on the ship are the talents and capacities that work for us. They too cannot save us from our futile desire to escape ourselves. The whale is the symbol of ultimate confrontation of the recognition that our ultimate fate is the grave. For some, that recognition almost feels like a welcome refuge. For others, facing death forces them at last into pursuing life!

As with Jonah, our recognition of our own vulnerability can bring us to finally transcend our ego, surrendering our desire to control events, and beginning at last to accept our mission in life, no matter what it is.

We can suffer the vicissitudes of life, and recognize that we ourselves have caused the storms to toss us back and forth. We can move forward to fulfill our purpose, but we are still not free of conflict and anxiety until we finally recognize that every step along the way, we are embraced by Divine compassion.

It is then that we are ready to return to God. While for each of us the path is our own, and never yet explored by any other person, Jonah knew the beginning and the end of the journey that we all make.

Yom Kippur is the day in which each one of us can relive Jonah's journey. Let us finally move towards whatever the next step is for us in fulfilling the mission for which we were created. Let us use the time to return to God with joy and love.

Is Break-Fast the Hippest Holiday?
Should I Break Up, Get Engaged or Keep Dating?
Time Is Your Precious Commodity
A Constant World in Flux
Comments
MOST POPULAR IN Yom Kippur
Our privacy policy