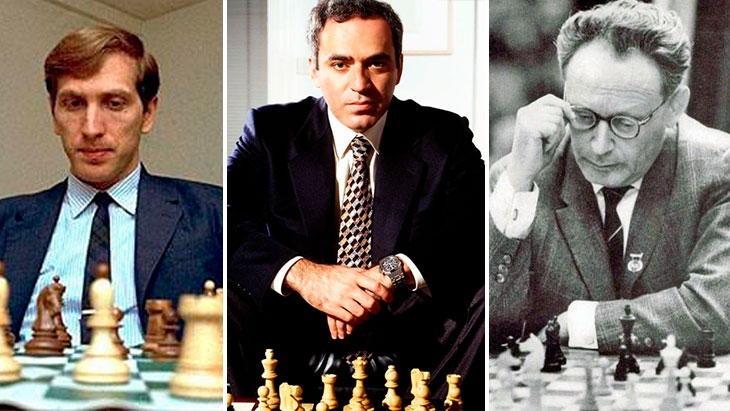 Jews have long helped shape the game of chess.

The Queen’s Gambit, Netflix’s wildly popular miniseries, is focusing many people’s attention on the timeless game of chess. Chess has long been a popular game in the Jewish world, and Jewish players have helped shape the game since its beginnings. Here are seven little known facts about Jews and chess.

Early Chess in the Talmud?

The game of chess originated in India in the 6th Century CE, growing out of several other popular board games that were popular at the time. The most likely precursor to chess is the Indian game chaturanga – the Sanskrit name means “four armies” and recreates an epic battle described in the Indian epic poem the Mahabharata. From India, the game travelled north to Persia, where the name of the king piece was changed from the Sanskrit name Rajah to the Persian Shah. Board games were already popular across the Middle East at the time, but this new version had some distinctive features we associate with modern chess: the pieces each had different powers and abilities, and victory depended on the survival of one piece, the King.

The Talmud mentions a game called Naradshir (Ketubot 59a). The Medieval Jewish sage Rashi, who lived in France, translated Naradshir as Ishkakish, an old French name for Chess. (We get the chess term “check” from the same French word, echec, meaning failure.) Yet later historians have concluded that Naradshir was more likely a board game played with dice, perhaps one of the popular games that soon would help inform and influence the emerging game of chess as it developed in the Middle East.

Early forms of chess became widely popular and spread throughout the Medieval world from Persia. Traders along the Silk Road brought chess to China, where it developed into Xiangqi, also called “Chinese chess”. This game is played with carved disks on a board that is marked by intersecting lines instead of a checkerboard pattern. 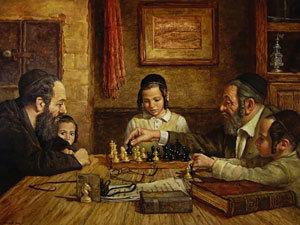 Chess made its way west through the Byzantine Empire and into Europe, spreading like wildfire. Soon, chess was being played in India and Iceland, as far west as Spain and across the eastern expanses of Russia. A perfectly preserved chess set from the 1100s – known as the “Lewis Chessmen” – was even found in the remote Isle of Lewis in the outer Hebrides of Scotland.

In Hebrew, chess is called shechmet, which sounds like the Persian terms shah or sheikh (king) and the Persian (and Hebrew) words for death, met.

During the Middle Ages, many of the chess terms we use today developed, often from Persian terms. For instance, “Rook” sounds like the Persian word for chariot. In ancient Persia, war chariots were built like mini fortresses, surrounded by stone walls and turrets, much like today’s rooks on the chess board. While the English word chess comes from the French echec, other languages have different names for the game. In Hebrew, chess is called shechmet, which sounds like the Persian terms shah or sheikh (king) and the Persian (and Hebrew) words for death, met. (In German, a checkmate is known by the same term: Schachmatt.)

In 1140 in Spain, the great Jewish poet-philosopher Rabbi Yehudah Halevi wrote The Kuzari, a series of letters to the king of the Khazars in which Rabbi Halevi discussed the human condition and beautifully explained Jewish belief. Chess was becoming popular with royalty throughout Europe, and was beginning to be called “The Game of Kings.” This royal and challenging board game provided Rabbi Halevi with a beautiful metaphor for explaining free will.

“Man finds within his soul the ability to do evil or to forsake it, using those measures that are within his grasp,” Rabbi Halevi explained. A wise person exercises this ability, working hard to fulfill their God-given potential: any seeming obstacles that get in our way are trials meant to strengthen and refine us.

The mental energy required is like that required to excel in chess: “For this reason, the weak-minded person is unable to beat the strong-minded person in the game of chess. One cannot argue that good or bad luck are factors in the war of chess, as we could say in a real war between two kinds. This is because all the causes (for a victory) in chess are within the individual. The wise player will therefore win by constantly exercising these causes…” In life, as in chess, it’s crucial to wisely choose our course of action. (Kuzari 5:20,52)

Legend of a Jewish Pope

For years, Jewish storytellers relayed a fantastic legend about a Jewish pope who rediscovered his father over a game of chess. While almost certainly fictional, the tale does have a (very small) element of an tragic true event.

Rabbi Shimon ben Elchanan HaGadol was a prominent rabbi living in the German town of Mainz in the 10th Century. His son Elchanan was kidnapped by Christians, baptized against his family’s wishes, and was raised by his kidnappers in the Catholic faith. Rabbi Shimon was overwhelmed with grief and never stopped looking for his son. He wrote a beautiful prayer that is still recited to this day on Rosh Hashanah – and which contains a prayer within a prayer. In a little-notice detail, the first letter of each of the lines in Rabbi Shimon’s Rosh Hashanah prayer spells out a plea to God for “my son, Elchanan.”

Over time, the fictional legend sprang up that a great rabbi from Mainz’s son was kidnapped, renamed Andreas, and raised as a Christian. In the legend, Andreas grew up to become a great scholar and eventually was elected Pope. In some versions of the tale, Pope Andreas longed to find his father so he issued an order expelling all the Jews from Mainz: the community’s leading rabbi requested an audience with Pope Andreas, not realizing he was his son, in order to plead for mercy. In other versions, it was the great rabbi who sought out Pope Andreas for help, either in locating his son, or alleviating anti-Jewish decrees. Once the two men were together, the story goes, they played a game of chess. While chatting over the pieces, it became obvious that Pope Andreas was the rabbi’s son. This Jewish story illuminates the dire status of Jews in Medieval Europe – and also the central role that the game of chess in Jews’ leisure time.

One of the most vivid and colorful of the Medieval Jewish sages was Rabbi Avraham ibn Ezra. Born in 1089 in Tudela, Spain, he died in the mid-12th century, most likely in France. During his long life, ibn Ezra wrote penetrating Biblical commentaries, and also penned books on mathematics and astronomy, wrote at least one novella, and authored many beautiful poems. 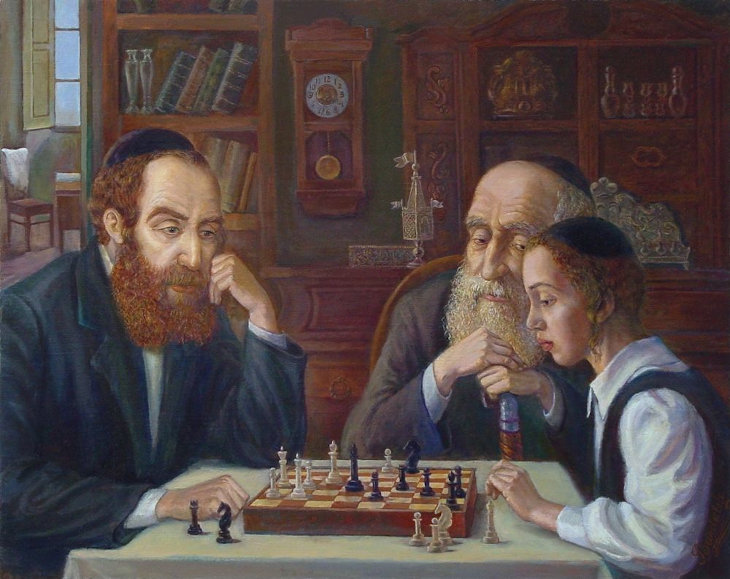 Ibn Ezra travelled extensively throughout Europe, and was an early enthusiast of chess. Three of his surviving poems are Hebrew paeons to the game. In one, he describes the opposing chess armies as Kushim (Ethiopians) and Edomim (Europeans):

The kings stand with their camps
To fight, and there is space between them.
Their faces are set for war,
And they sally forth and camp continuously.
But they draw no swords in this war
For this war is the work of thoughts…
The Kushim stretch out their hand in battle
Adomim next after them.

Interestingly, there are some key differences between the chess that ibn Ezra played in the Middle Ages and the contemporary game. In ibn Ezra’s telling, pawns are called ragli and move first. The queen in ibn Ezra’s poems is a male piece, and can only advance four squares in any direction. A bishop is called a pil, or elephant, and “stands on the side to ambush”, and the king “walks along the sides, in all directions, and helps his servants.”

Chess gained in popularity, but it was only in the 1800s that the concept of having a world chess title as we know it was born, thanks to an amazing Jewish player named Wilhelm Steinitz (1836-1900). 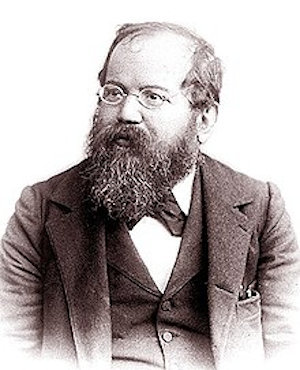 Steinitz grew up in a religiously observant family in Prague and initially planned to become a rabbi. As a child, he was too poor to afford a chess set, so he carved his own out of kindling wood, and painted a piece of rag to use as a board. Within a few years, he’d distinguished himself as the leading chess player in all of Prague. After studying mathematics at college, Steinitz travelled to London, which at the time was considered the center of world chess, to participate in an international chess tournament. Steinitz came in 6th in the world in the first tournament he participated in, in 1862; by 1866 he’d improved to become the world’s number one player. It was a title he defended for 28 years.

Steinitz remained in London for most of the rest of his life and helped shape the modern game. He invented the Steinitz Gambit (a powerful opening move), edited a chess journal, and contributed to the chess standard dictionary. His game was less flamboyant than some previous players, and Steinitz set the fashion – which still exists – for chess masters to play careful, deliberate games and secure a series of slight advantages instead of pursuing more flamboyant moves. Steinitz was also the first chess player to stipulate rules under which he’d play to defend his title. His match against Joann Zukertort in 1886 was the first official “World Championship” for chess, a title that Steinitz insisted upon.

Over half of the reigning world chess champions have been Jewish.

Steinitz lost his mantle as the reigning chess champion in 1894 to Emanuel Lasker, another Jewish chess protege.

Half of Chess Champions are Jewish 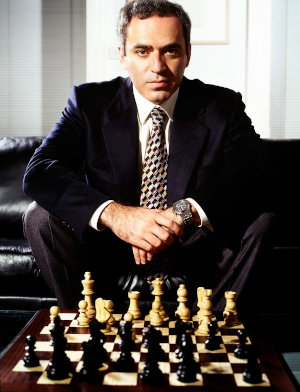 Given the dominance of chess by Jewish players, it’s no surprise that Israel today is one of the world’s great chess nations. According to the International Chess Federation, Israel ranks 15th in the global rankings, despite its much smaller size compared to other great chess countries such as Russia and India, and is home to 212 chess Grand Masters and International Masters. The Israeli city of Beersheva has a higher percentage of chess Grand Masters than any other place in the world: one Grand Master for every 22,875 residents.

In Israel, kids start learning chess from a very young age. In 2020, it’s estimated that over 10,000 Israeli kindergarteners and first-graders play the game. With the current popularity of The Queen’s Gambit, it’s possible that even more kids – and adults – the world over will discover this classic game, and the ranks of chess aficionados through the ages.

The Jewish Plot to Kill Hitler

The End of French Jewry?