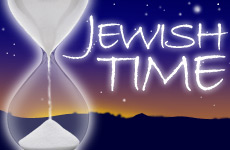 Jews keep time in a way from the rest of the world. Discover why the calendar begins with Creation, the month with the new moon, and the day with sunset.

The major ideas of the Jewish religion, even though they are intangible, are made accessible by being embedded in time. They are celebrated on specific days in a yearly cycle of feast and fast and anchored in space -- by palpable substances such as a hut or matzah or candles.

Anything that can be done at anytime by anybody will be done at no time by nobody. Judaism preserves the exalted principles and the cataclysmic events of its history through a structured, well-defined, and specifically timed system of practices that it requires of its adherents.

The religious calendar has therefore been referred to as "the catechism of the Jew."

Ancient peoples started to count their calendar years anew with the reign of each new monarch. When Christianity rose to dominance in the western world, it began to date history from the birth of its own "king," later according to the Gregorian calendar. Hence, history was divided into BC and AD, before the advent of the king's birth and in the "year of the lord." Judaism could not consent to divide history along these lines; it did not divide universal history even to make a fulcrum of Abraham's or Moses' birth. Therefore, the Jewish religious calendar was never oriented in this manner.

For many centuries, the Jews counted the years from one event -- the formative event of its existence as a people -- the Exodus from Egypt. After the destruction of the Temple in 70 CE, that cataclysmic event for a while replaced the use of the Exodus as the inaugural date.

But the sense of the Jew in this regard, which came to expression only after centuries, was that even an event of such magnitude was not critical enough to draw a line through time and to re-start counting world history.

Only one occurrence could serve as a beginning for history: the beginning of history. Judaism determined to count the years of the calendar on a universal scale -- from the creation of the universe. But exactly how old is the earth?

Judaism determined to count the years of the calendar on a universal scale -- from the creation of the universe.

Even scientists with their most advanced and exacting instrumentation are sure of only one answer: there can be no precision in this matter. The only method for the Sages was to count the years according to the literal account of creation in the Bible itself.

Hence, what the Hebrew date 5751 implies is 5,751 years of God's sovereignty over the world according to the counting in Torah, and that is its timeless significance.

But this presented a problem: Jews everywhere were a minority and, while they could count time according to their view, they were living in an alien world where the overwhelming majority differed in this common legal practice. Jews, who resided over the face of the earth, could not ignore the way the world keeps time, the basis of a human being's daily life. While Judaism is not "of" this world -- in the sense that it strives ideally to transcend this world -- it is very much "in" this world, and therefore, the Jewish community needed to accommodate its secular calendar to global usage.

In Jewish terms then, we are living in 2000 CE, the ancient Temple was destroyed in 70 CE, the Maccabees rebelled in 165 BCE.

The Jewish religious calendar, however, makes no recognition of this secular device, retains its universal format, and continues to count its years on a universal scale -- from the beginning of creation.

Jews celebrate the religious New Year, Rosh Hashanah, on the day the Torah considers the day of creation, according to its literal reckoning, the first day of the Hebrew month of Tishrei, which usually falls in late September.

Jews count the months by the moon; western civilization patterns its calendar after the sun. That presents a dilemma. The moon travels more slowly than the sun -- by approximately 48 minutes a day. At the beginning of the lunar month, she sets in the west shortly after sunset, and each day 40 to 45 minutes later. She continues to lag further and further behind the sun (each lunar month being 29-1/2 days) until, at the end of 12 months, the year of the moon is 11 days shorter than the year of the sun, every three years losing a full month of time.

This introduces a special predicament for the religious calendar: Passover needs to be celebrated at the vernal equinox -- springtime and harvest are its natural hallmarks, the resuscitation of nature coinciding with the redemption of the people. But, if the lunar calendar loses a month every three years, Passover would move further each year and fall successively in every season of the year. That is exactly what happens to the Muslim festival of Ramadan.

The sages ingeniously devised a perpetual calendar that would keep the holidays in the right season.

The teachers of the Talmud made the adjustment by adding seven leap months (called "Second Adar") in the course of each 19-year cycle, and thereby ingeniously devised a perpetual calendar that would keep the holidays in the approximate season for which they were originally conceived.

The first day of the lunar month, called Rosh Chodesh, was originally proclaimed by the central court in Jerusalem after the new moon was visually sighted. After the destruction of Jerusalem, Rosh Chodesh was calculated by the astronomical calendar and it determined on which days the holidays fell.

The Torah designates certain days of the month as beginning the holidays. As people cannot manage 29-1/2 day months, some months are 29 and some are 30 days. The 30-day months have two days of Rosh Chodesh, those of 29 days have one day.

In a replaying of the ancient tradition of the court's proclamation of the New Moon, on the Sabbath prior to Rosh Chodesh the new month's arrival is now proclaimed during the synagogue service, replete with an announcement of the split second that Rosh Chodesh begins. Jews celebrate Rosh Chodesh primarily by prayers added to the service.

A marvelous Jewish tradition records that Rosh Chodesh, the renewal of the monthly cycle, celebrates womanhood. It is not only a toast to women and a reminder of gratitude due them, but is actually declared a holiday on which women should not work.

This monthly tribute was initiated as a special reward because at Mt. Sinai, unlike the men, women refused to contribute their jewelry to the fashioning of a golden calf -- the starkest demonstration by the recently freed slaves of their lack of faith in God and His servant, Moses.

The Sabbath is a Queen. It is a foretaste of the very world-to-come. The Day of Atonement, Yom Kippur, is the one day holier than the weekly Sabbath and its extraordinary sanctity gained it the appellation "Sabbath of Sabbaths."

"More than the Jews have kept the Sabbath," a great writer once said, "the Sabbath has kept the Jews."

"More than the Jews have kept the Sabbath," a great writer once said, "the Sabbath has kept the Jews."

It is so rooted in the human condition that no matter how many societies have tried to uproot it, they could not. Some have simply moved the day: Christians to Sunday, Muslims to Friday. The Sabbath stamps its mark on the individual, on the nation, on the week.

All weekdays lead to the Sabbath. In fact, the days do not have names, only numbers, and these numbers all look to number seven, anticipating the arrival of the seventh day, the Sabbath, Shabbat.

The days from Sunday to Friday are viewed, psychologically as well as physically, as steps leading up to the Shabbat, the "palace in time." New clothes are worn first on the Shabbat; special foods are prepared for it; important guests are invited to join the family for it; meaningful discussions are delayed until the Shabbat.

Friday, because it of its proximity to the Shabbat, virtually loses its own identity; it is simply Erev Shabbat, the threshold of the Shabbat, on which even the most important scholars help in the kitchen.

Following the analogy of weekdays as steps leading up to the holy day, at the close of the Shabbat, Jews experience a precipitous drop of excitement -- the Shabbat departs, and life on the lowest rung of the first day of the week has to begin the climb again.

The Jewish day does not begin and end at midnight as does the secular calendar day. Midnight is not a distinguishable astronomic event. In the era before the modern clock, a specific hour of the night could not be precisely known, whereas an hour of the day was easily determined by sighting the location of the sun. Thus, the day had to begin by precise, simple and universally recognized standards. This meant that the day had to be reckoned either from the beginning of night or the beginning of day.

In Jewish time, the day begins with the onset of night (the appearance of the stars) followed by the morning (which technically begins with the appearance of the North Star). According to some Jewish teachers, night and morning begin with sunset and sunrise respectively. For that is how the Torah describes it: "And there was evening and there was morning, the first day."

That is how the Torah describes it: "And there was evening and there was morning, the first day."

For this reason, the Sabbath begins on Friday night and ends with the appearance of the stars on Saturday night. The same is true for the major holidays such as Passover, Sukkot, Shavuot, Rosh Hashanah and Yom Kippur, the fast day of Tisha B'Av, and Hanukkah and Purim.

Life consists of light and dark: "And there was evening and there was morning." What we make of time is what counts.

What is the Omer?
Why My Iranian Mother Didn’t Want Me to Become a Religious Fanatic
The Jewish History of Prague
Why the Sexual Revolution was Bad for Women
Comments
MOST POPULAR IN Holidays
Our privacy policy
Aish.com Is Looking for Great Writers