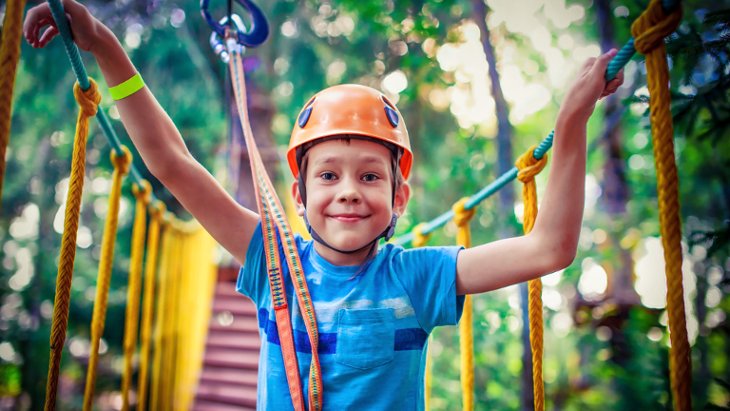 Here’s a list of things you or your child will be doing at camp this summer.

Summer camps are Jewish. Ever since Jews tried to get out of New York and get rid of their kids for the summer, summer camps have been Jewish. And who would have guessed that our “overprotective” Jewish parents would kick us out of the house for the summer and put us in the custody of a teenage boy they wouldn’t have trusted to babysit us?

To prepare you for this shock of Jewish life away from your parents, here is a list of many of the activities you will participate in this summer at camp.

Floor Hockey- This is a sport that Jews are remarkably competitive at, because nobody else plays it.

Roof Ball- This is where you throw a ball on the roof, to wake up all the people in your bunk during rest hour. When I was younger, I knew this game as The Ball Got Stuck in the Gutter Ball.

Gaga- Similar to dodgeball, this is where you whack the ball with your fist, so that it moves faster and hurts more. That is what happens when fifteen-year-old boys make up sports. Violence and kids crying.

Newcomb- This is volleyball, where you can catch the ball. We tried getting the kids to play actual volleyball without catching it, but that was too complicated. Judaism has lots of rules. When it comes to sports, we don’t like following them.

Torah Baseball- Another sport where you compete with your mind, so you too can be a champion. It costs the camp a lot less for you to answer questions about the Torah portion than having to manicure a baseball field.

Arts and Crafts- a) When you are not artistically talented, they add on the word “crafts.” “Art” is a painting you put in your dining room. “Arts and crafts” is boondoggle. b) Where you make Jewish pieces that you are not going to use for another half a year. You take a slab of wood and put nuts on it and that is your art; a candle holder for Chanukah, even though it’s July.

Night Seder- At very religious camps, this is where you learn Torah at night. Doing it at night, makes it more awesome. That’s an activity. During the day it’s learning, at night it’s an activity. That is how Jewish camp programs the day.

Free Swim- When the lifeguard goes to sleep.

Snack Time- When you get to drink milk out of an eight-ounce carton. Might be the most exciting activity in camp. On a special occasion you might get popsicles.

Letter Time- This is how you honor your parents, by paper. Emails don’t show you care. Going green is very bad for relationships. Jewish summer camp is the only place in the world where letters are still written by hand. It’s about survival. Let’s say you are lost on a desert island, nobody around, and you want to contact your parents? The Post Office is all you have. They will pick up. Let’s say your computer can’t fake the personal letter that you wrote to three hundred people in cursive, all named “Shalom,” thanking them for coming to your party and donating money to your fund, and you have to sign by hand and you have poor penmanship? Think about that for a minute.

Davening- You might do more religious stuff in camp than in school. Camp is an extension of Jewish day school, because your parents are still complaining they paid way too much tuition.

Flag Raising- Do they still allow that? Is that too patriotic?

Laundry Day- A full day of trying to figure out why all the nametags on the undergarments rubbed out.

Harlem Wizards- When your camp can’t afford to bring the Harlem Globetrotters. This is funny, because they mess up the tricks. It is so much more entertaining when the ball doesn’t go in the basket. When they take the half-court shot and it doesn’t go in, that is entertainment.

Intercamps- a) When you run into people from your school. b) When you play other Jews in sports and you now hate them, because they are better athletes and caught the volleyball. c) Hatred of other Jews.

Roller Skating- An activity where you try not to fall. You thought this stuff doesn’t exist anymore. The idea of camp is to bring the Jewish kids back to the wholesome times of the late 1970s, with roller skating, bowling, and disco in the form of Yaakov Shwekey on the loudspeaker.

Rain Day- Another day where you play Gaga.

Visiting Day- The one day the camp is clean.

Song Competition- When they make harmony competitive. You will be stuck in the back behind hundred kids, just don’t be loud. You can blame Glee and Pitch Perfect and the Maccabeats for getting people excited about killing two songs by mixing them together. Just remember, when you are bothered that “Shalom Rav” and “We Are Young” are now the same song, you are not alone.

Color War- After you learn to get along with all the other kids in your bunk, this a couple of days where you are required to hate the other ones that are on the purple, blue and yellow teams. If intercamp was not enough of a reason not to love your fellow Jew, Color War will help. See Tisha BAv for when the Temple was destroyed because Jews were playing Newcomb.

Color War Breakout- a) I wish I could tell you what this is. I am at a loss. b) Somebody older than you, acting crazy and then screaming “Color War.”

I know you are worried about your children getting homesick and surviving. Don’t worry. You left them in the hands of a 15-year-old boy. Or girl. Your child will be fine. Your child will walk out of camp more active and accomplished. There is no pride or sense of accomplishment like when you, the red team, edges out the anti-Semites purple team in Newcomb. Or when you win in Torah Baseball and hit that homerun for your team because you knew the blessing on lightning. These are the experiences that build a Jewish child.

Let your children enjoy the activities. I can tell you, as I have gotten older, I have never felt as much of a sense of accomplishment as when I was able to find my undershirt in the camp laundry. And the pride you will have when your daughter comes home with a Seder plate that she made, which you can use as a Sukkah decoration, or an ashtray.

How to Make Jewish Summer Camp at Home

Taxes Shmaxes
The Promise Of The Land
Which Chat Are You On?: Parshas Behar/Lag Ba’Omer
Do You Like Slow-Cooked Food? Thank the Jews
Comments
MOST POPULAR IN Funny Stuff
Our privacy policy