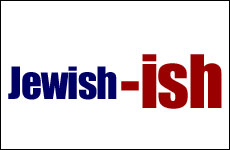 Catholics are Catholics, never Catholic-ish, and Protestants are Protestants, never Protestant-ish. So why are we hedging our bets?

There’s a slightly less than divine logic behind my being “Jewish.” In a way, our Hebrew handle speaks to how sensitive our people are to nuance and zeroing in on the tiny picture, the nooks and crannies of life. Notice I didn’t say “divine logic.” I was more nuanced than that. Make that slightly more nuanced.

We Jews are all about the little picture: “Who serves Miracle Whip over mustard?”

“Jewish” reflects various levels of identity, from strictly cultural to Orthodox. Catholics are Catholics, never Catholic-ish, and Protestants are Protestants, never Protestant-ish. They’re all about the big picture: “The party was awesome.” “The band was amazing.” We’re all about the little picture: “Who serves Miracle Whip over mustard?”

Not that we’re incapable of seeing the glass half full. It’s just that we’re uniquely capable of also seeing the fingerprints on the half glass full that appear the same diminutive size as the fingers of the host’s lovely young daughter who covered her mouth while sneezing, or more accurately, after sneezing. Thirsty for knowledge? Definitely. For water? Pass.

Some people and phenomena might be considered Jewish-ish. Kind of Jewish. Not full-blown (as in the shofar) tribe members, but in the non Kosher franks-serving ballpark of, but not really. (There’s that nuance again.)

The Barones on Everybody Loves Raymond were Jewish-ish.

The Costanzas on Seinfeld were Jewish-ish. (Wait. Italian heritage or not, that’s ridicul-ish. I’m changing my vote to Jewish.)

Curb Your Enthusiasm – Jewish. Reign in Your Zeal – Jewish-ish.

As I zero in on the tiny pictures, I realize that our propensity to discern details others might not necessarily pick up is somewhat ironically akin to a large screen picture. Jews tend to have HDTV – High Definition Tsuris Vision. What if non-Jews could don special glasses that simulated an extra dimension . . .

Simon Cowell: “If I may be honest… (Dons HDTV glasses) After crushing the dreams of the deluded for hundreds of millions of dollars, you’d think I could afford to wear less ratty looking shirts.”

Appropriate for a religion that ends with “ish,” being Jewish isn’t about one size fitting all, unlike a Snuggie. But like a Snuggie, it warms me… to know that I have company when it comes to wondering why the heck stale hard cookies get soft, and stale soft cookies get hard.