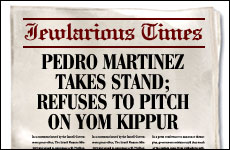 May not be able to pitch on the first days of Sukkos or Simchas Torah.

JEWLARIOUS SATIRE -- Pedro Martinez, star pitcher for the New York Mets, shocked fans this week announcing that he would not take the mound on Yom Kippur. Telling reporters, "I don't care who clinches the other playoff spot -- St. Louis , Los Angeles or San Diego -- I cannot and will not play on Yom Kippur, the holiest day of the Jewish year." When asked by reporters if he was Jewish, Martinez responded, "No, I am Catholic. Most Dominicans are -- why do you ask?"

When pressed, Martinez tried to clarify his decision. "Look, I have been having elbow problems as of late and these guys are really good. Pujols crushed 45+ home runs this year. Garciaparra is hitting .305. These guys are professionals. They do this for a living. I will not pitch on Yom Kippur."

Responding to a question from the New York Post about whether he was paying tribute to Hall of Fame Pitcher Sandy Koufax, who refused to play in a 1965 World Series game because it coincided with Yom Kippur, Martinez responded, "Kou-who? What don't you understand? Adrian Gonzalez is slugging almost 50%. Why don't you go out and have every second ball fouled-off?"

Martinez was caught off-guard when informed that there were no Major League Baseball games scheduled for October 2nd. "No games on asarah b'Tishrei?" the left hander replied using the Hebrew date for the Jewish festival. "Well, I guess that is a good thing, but I still may not be able to pitch on the first days of Sukkos or Simchas Torah. And you can just forget about Hoshana Rabbah."

The Resolution Rundown
Should I Break Up, Get Engaged or Keep Dating?
Time Is Your Precious Commodity
A Constant World in Flux
Comments
MOST POPULAR IN Jewlarious
Our privacy policy