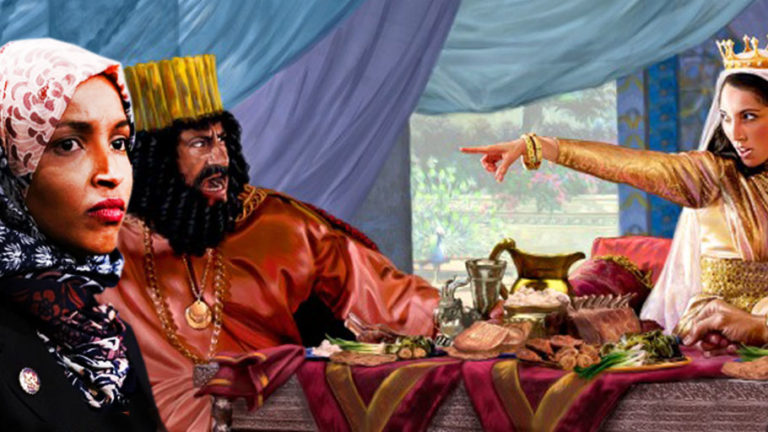 The Purim story’s warning of enemies who seek our destruction assumes such powerful relevance today.

George Eliot is credited with saying, “History repeats itself.” Mark Twain sharply improved on it with his observation that “history doesn’t repeat itself – but it does rhyme.” No matter how much things may change, one constant always remains: the Hamans of the world, the Jew haters who seek “to destroy, to murder and to bring to an end all Jews, from young to old”, are somehow forever with us.

It was foretold in the Torah. In the first battle against Amalek, prototype of the anti-Semite throughout the ages, we are informed that although the Jews won the fight, Joshua only “weakened” our enemy. Amalek survived. He continues to plague us in many disguises – masks which have become part of Purim ritual to remind us that people often conceal their true intentions under the guise of noble goals even as they plot the genocide of our people.

What happened in Shushan is the story of our people throughout the ages. It isn’t just ancient Persia, the persecutions and the pogroms of the Middle Ages or even the Holocaust of the 20 th century. Tragically it is the story once again of our own times. Not only Persia/Iran but sophisticated France, cultured England, educated Europe and the rest of the “civilized world” are again proving the truth of Elie Wiesel’s insight that “the only thing we have learned from history is that we do not learn anything from history.”

As we recall the Purim story once again, its warning of enemies who seek our destruction assumes such powerful relevance even here in the United States today.

Let me remind you a little bit about the Jews in Persia of old. When King Achashverosh celebrated his ascent to the throne he threw a huge party to which all were invited. Jews were welcome guests. The drinking was in accord with people’s different faiths. In retrospect, a bill decrying hatred against any and all minority groups would almost certainly have passed in the Persian Congress. Yet it only took a short while for Haman to turn his strategy of genocide into national policy.

What was the key to Haman’s success? His speech is recorded in the Megillah:

And Haman said to King Ahasuerus, "There is a certain people scattered and separate among the peoples throughout all the provinces of your kingdom, and their laws differ from [those of] every people, and they do not keep the king's laws; it is [therefore] of no use for the king to let them be (Book of Esther 3:8).

The Jews have dual loyalty!

That is their crime. Ilhan Omar didn’t invent the brilliant lie. It’s always been Amalek’s secret weapon. Hitler knew it. Stalin knew it. Read the Torah on the way in which Pharaoh was able to turn the Egyptians against the Hebrews – the same Egyptians who had been saved by the wisdom of Joseph – and you will find the similar strategy:

“ He said to his people, ‘Behold, the people of the children of Israel are more numerous and stronger than we are. Get ready, let us deal shrewdly with them, lest they increase, and a war befall us, and they join our enemies and wage war against us and depart from the land’” (Exodus 2:9 – 10).

Winston Churchill famously said, “A lie gets halfway around the world before truth puts on its boots.” The lie of Jewish dual loyalty is perpetuated by the Hamans of history even as Jews wherever they reside prove the truth of the promise given by God to Abraham that “I will bless those who bless you.”

Purim, happily, is not merely the story of anti-Semitism; it is the biblical record of a major victory over a nefarious anti-Semite. And perhaps the most ironic part of the story is a truth made famous these past few weeks by a contemporary Jew hater.

Ilhan Omar is right; “It’s all about the Benjamins.”

For Omar “the Benjamins” – a reference to American hundred- dollar bills – was her despicable insinuation that Jews, as the forged Protocols of the Elders of Zion long ago put it, control the world behind the scenes with their money.

For the Book of Esther, “the Benjamin” was revealing to us at the outset that Mordechai was “Ish Yemini”, from the tribe of Benjamin. And why was that so significant? The rabbis explain that was the reason Mordechai was able to counter Haman’s libel and to demonstrate to us throughout the ages how best to overcome our enemies.

While others bowed down to Haman, Mordechai refused. It was a trait he inherited genetically. The rabbis tell us that when Jacob met with his brother Esau he bowed down to him. According to some commentaries, it was a sin for which he would be held accountable. And 11 of Jacob’s sons bowed down as well. Only Benjamin, who was not yet born, did not bow. And so Mordechai, a direct descendent of Benjamin, maintained the tradition of his ancestor.

Aware of the threat to their survival, Jews need to put aside their differences and unite in the face of a common enemy.

The man who would not bow down to an enemy in humble submission is the one who encouraged Esther to similarly stand proudly and firmly, without embarrassment or fear, and speak up on behalf of our people. “Who knows,” he told her, “if not for a time such as this have you been placed in this position of rulership.”

Mordechai and Esther are the heroes of the Purim story because they refused to cower before those who sought to destroy our people. They spoke out against their Haman with all of their strength. It’s all about the Benjamins and those who refuse to remain silent when enemies again plot “the final solution” for Israel and for our people.

Maybe it isn’t a coincidence that all this is happening at the very time Jews around the world are celebrating Purim. History records not only the recurring story of anti-Semites and anti-Semitism. It also confirms the Divine intervention that has invariably assured our survival. And this miracle – in the one biblical book in which God’s name isn’t mentioned even once – is a miracle we desperately need today: The miracle of Jews, aware of the threat to their survival, who put aside their differences, united in the face of a common enemy, and collectively recognize that it must’ve been for “a time such as this” that we are given the opportunity to partner with God.