How the Rabin Assassination Changed My Life 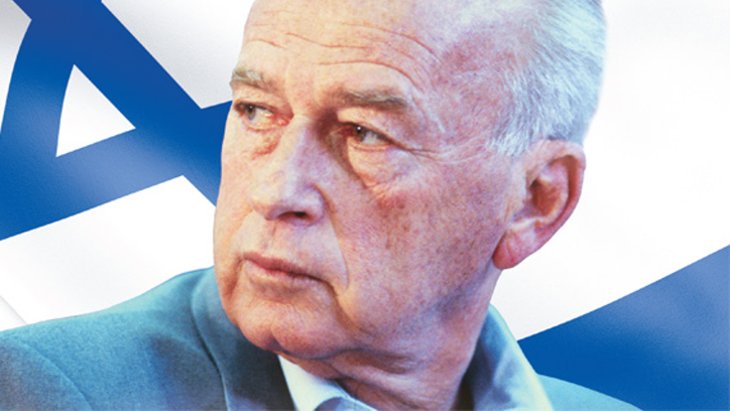 To us non-religious kids in Herzliya, religious, right-wing fanatics had murdered our prime minister – and I couldn't let that be all I knew about Judaism.

When I was in seventh grade, I was part of a group of “good kids” from Herzliya. We came from excellent families and went to a prestigious school. One morning in January 1994, our teacher came into our classroom in shock. Our math test was even canceled that morning. It turned out that two boys from our city, Arbel Aloni and Moshiko Ben Ivgi, had been arrested on suspicion of a murder that shocked the country at the time: the murder of taxi driver Derek Roth. We knew those boys from school and from the neighborhood. Everyone knew them. They were tough, cool, and a bit older than we were. Prior to that, the most serious offence we had ever attributed to them was writing their names in graffiti, which they sprayed all over town. But suddenly, this happened. Boom.

Outside of our school, TV crews were already waiting. Inside our classroom, not only was our math test cancelled, but the entire day’s program was cancelled. Every subject was moved aside to make way for hours of classes on education and society. It was a year in which quite a few psychologists, educators, and police officers came to speak to us, the youth of Herzliya. These lessons were far more interesting and meaningful than our usual lessons. For the first time, we talked about what the law is, what murder is, what democracy is, and what violence is.

A year passed. One Saturday night, a few friends from school went to the large rally held by the left at Kikar Malchei Yisrael, Kings of Israel Square. But I stayed home to study for a big chemistry test that was scheduled for Sunday morning (at the time, girls like me were called “nerds”). Suddenly, at 9:45 PM, Rabin was murdered. Within minutes, it was announced that the murderer was from Herzliya, and a few minutes after that, the television crews had descended upon my city.

My chemistry test was canceled the next morning, and, again, we had educational classroom discussions. They were much more pointed than they had been the previous year. This time, my whole class did not all simply agree on an amorphous call to “end the violence,” as we had when Derek Roth was murdered. This time, our outcry was more loaded: the religious and right-wing fanatics had murdered our prime minister Rabin. 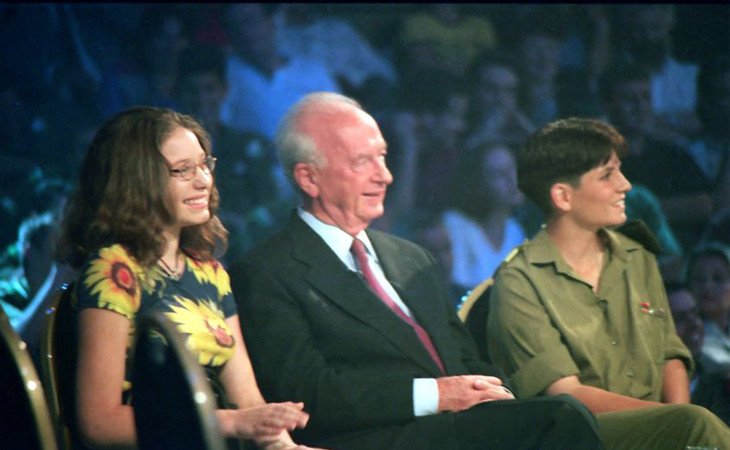 Sivan Rahav (left) aged 14, together with Yitzhak Rabin, on the Dan Shilon Live program,
in honor of the Jewish New Year, September 1995.

On that Saturday night, as I ran from my room to the TV in my parents’ bedroom, I passed the dresser that stood in the hallway, perpetually covered by a pile of changing notes and other documents. On top of the pile were photos of me and Rabin smiling in the studio of Dan Shilon’s famous “Circle” on Channel 2 TV. I had met the prime minister there about a month before the assassination; I had been invited to the talk show to interview him in my capacity as a young reporter. The filming lasted several hours, and it was my first and last meeting with Rabin.

When everyone in my class was talking about the murder of the prime minister, I was thinking about a person I had recently met in real life.

What I remember most was his lack of social distance. On the one hand, there were singers, fleeting stars who were full of themselves when I interviewed them for a children’s magazine, and, on the other hand, there was the prime minister whose conduct was devoid of any posturing. In school the next day, when everyone in my class was talking about the murder of the prime minister, I was thinking about a person I knew, a person I had met in real life just a short time before, and now he was gone. I think it was the first time someone I had known personally passed away.

After that Sunday morning, the municipality, the Ministry of Education, and the staff of our youth movements all bombarded us with overdoses of educational activities, perhaps due to a secret desire to ensure that, next time, the disgrace would not come from Herzliya again. Classes were followed by workshops; lectures were followed by panel discussions. They had titles such as “Judaism and tolerance,” “Thou shalt not murder,” and “Violence erodes the foundations of democracy.”

I remember one night when we went to Rabin Square. It was probably on the shloshim – the 30th day after the assassination. We sat there, members of different youth movements, in circles. One of the youth leaders, a young man wearing a kippah, handed out source sheets. The texts on the page seemed to me to be written in spoken Chinese – I found them fascinating.

Another source discussed the gravity of murder: “It was for this reason that a single person was created in the world, to teach that anyone who causes a single life to perish is considered by Scripture to have destroyed an entire world, and anyone who saves a single soul, is considered by Scripture to have saved an entire world. For all people are created in the image of Adam, and yet none of them resembles the other. Therefore, each and every person can say: the world was created for my sake.” According to the source sheet, this text was taken from the laws of the Sanhedrin in the writings of Maimonides. But what is that? Where do these ideas come from? Why hadn’t we ever learned them in school? And how could I find them on my own and read more?

And there was more: “Love your neighbor as yourself. Rabbi Akiva says: 'This is the most important rule in the Torah,’” says the Midrash. But what is Midrash? And why do all these texts sound foreign and strange, but at the same time as if they are mine? And why are the fascinating discussions here in the square so different from the rather boring Bible lessons at my school?

The Rabin assassination was a low point which led me to embark on a long journey and to begin to take responsibility for my Judaism.

On the way home on the bus, I read the source sheet over and over. By the time I got home, I knew some of the texts by heart. And I wanted to know more. I remember the chills that I felt when I realized: Yigal Amir knows all this, and much more. He knows how to find things on his own in Pirkei Avot, in the writings of Maimonides, and in the Midrash.

When people who return to religious observance are asked how it all began, they often talk about “seeing the light.” I, in a sense, saw the dark. The Rabin assassination was a low point, which led me to embark on a long journey and to begin to take responsibility for my Judaism.

While everyone around me was saying that democracy must be strengthened, I actually thought that it was Judaism that needed to be strengthened – that this act of murder could not be what represents Judaism. It was inconceivable to me that when secular-Ashkenazi-left-wing children from Herzliya hear the word “Judaism,” their association would be to the murderer who assassinated the prime minister.

At the time I understood very well what Judaism was not, but not what it is. I wondered: What about us? What is our Judaism? I felt like we were behaving like a group of fans who thought their team was playing badly. We were sitting in the bleachers, shouting, calling out advice, getting aggravated. You can waste your entire life ranting about “those religious people,” “those fanatics,” and “those extremists.” But when it comes to Judaism, I felt we are not just fans. We are part of the team. We must come down from the stands and onto the field and start playing ourselves. We have to take responsibility.

When it comes to Judaism, we are not just fans. We are part of the team. We must start playing ourselves and take responsibility.

A whole new world opened up to me, a Jewish bookshelf full of thought, and a panoply of deeds. This was all a far cry from everything I had thought about religious people at the time. While the secular Tommy Lapid and the ultra-Orthodox Israel Eichler were shouting at each other about this on the popular political talk show, in a discussion that ostensibly focused on Judaism, completely different treasures were buried beneath them: Shabbat, Jewish prayer, Torah, and acts of lovingkindness.

To this day, when I am asked to talk about my journey back to the observance of Torah and mitzvot, I am somewhat embarrassed. “The Yom Kippur War made me religious,” says a pilot in the Israeli Air Force reserves. “I returned because of Rabbi Nachman of Bratslav,” a fashion model says. And as for me? What will people think if I say “the Rabin assassination brought me back to Judaism”?

The above first appeared in Hebrew in a supplement published by Yediot Ahronoth in 2015 in commemoration of the 20th anniversary of the assassination of Yitzhak Rabin. Translation by Shira Pasternak Be’eri.

Sivan Rahav-Meir is a media personality and lecturer. Married to Yedidya, and mother of five, she lives in Jerusalem, and is currently with her family on shlichut, serving as the World Mizrachi Shlicha to North America, where she lectures in various communities. She works for Israel TV news, writes a column for Yediot Aharonot newspaper, and hosts a weekly radio show on Galei Zahal (Army Radio). Her lectures on the weekly Torah portion are attended by hundreds and the live broadcast attracts thousands more listeners throughout the world. Sivan lectures in Israel and overseas about the media, Judaism, Zionism and new media. She was voted by Globes newspaper as most popular female media personality in Israel and by the Jerusalem Post as one of the 50 most influential Jews in the world.

Mourning the Loss of a Memory