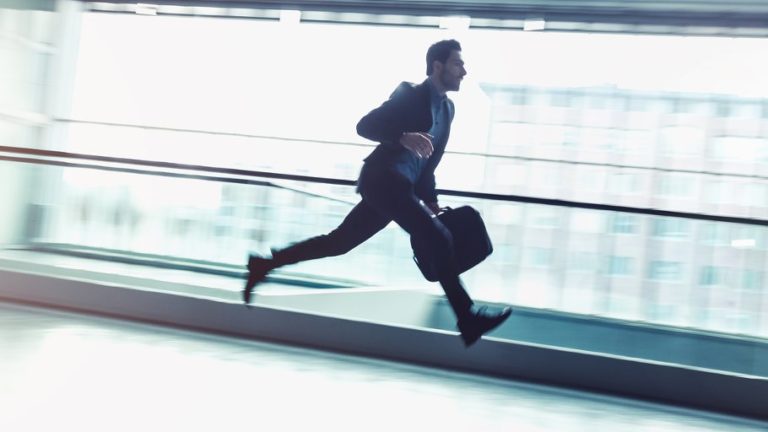 My harrowing flight home for Shabbat.

It was Thursday, the last day of my recent trip to America. I had a meeting in Manhattan that morning, then straight to Newark Airport for an afternoon flight home to Israel. After two weeks away, all I could think about was spending Shabbat with my family.

The meeting went longer than expected and I cut it close for an international flight, arriving 90 minutes before scheduled departure. Thankfully, things went smoothly as I checked in, passed through security, and made a brief restroom stop. As I approached the departure gate to see that boarding had begun, I reached for my U.S. passport – but my pocket was empty! How was this possible?! A frantic search of my belongings led to the distressing conclusion that my passport was officially L-O-S-T.

I tried not to panic and retraced my steps to the bathroom. The passport wasn't there.

I raced back to security. "I came through here five minutes ago with my passport in hand," I told the main desk. "Did anyone find it?"

After exhausting the "practical" options, I prayed to hear the loudspeaker announce that my passport had been found.

I pondered the absurd scenario of missing Shabbat with my family due to losing my passport at the last moment.

After a few moments of pondering a new solution – involving the use of my Israeli passport – the announcement came, instructing me to the Customer Service Desk.

I quickly stopped an airport employee and blurted: "Where's the Customer Service Desk?!"

I ran back to ask the folks at security and other airline employees. Nobody knew!

I felt a pit in my stomach. Every passing second increased the chance of missing Shabbat with my family due to irresponsibly losing my passport at the last moment.

Finally someone steered me in the right direction and I arrived, running and sweating, at the Customer Service Desk. The airline rep was waving my passport overhead like a baton, then plunked it into my hand as I sped off with no time to inquire about who'd found it and where.

I ran back to the gate (Why is my gate always at the end of those long airport corridors?) 20 minutes before scheduled departure. Things went smoothly and I was soon seated on the plane. I could already taste the home-baked challah.

A few minutes later, the captain announced that a corrosive substance had been found leaking in the luggage compartment. "We need to identify its source, clean it up, then inspect the plane," he said. "Expect delays."

Ninety minutes later, the captain ordered everyone off the plane. Apparently the airline's engineers had cleared the plane for takeoff, but the pilot did not agree. After some negotiation, they decided to swap planes – shifting all our luggage to another airplane. We'd be delayed at least a few hours, though ostensibly still make it to Israel in plenty of time for Shabbat.

I stepped back into the terminal to hear another crucial announcement: "All passengers to Israel who wish to change to another flight, go to the Customer Service Desk."

The Customer Service Desk? I know exactly where that is!

I saw a young man immediately sprint in the right direction, and I took off after him – arriving at customer service second in line.

"One seat just became available on the later flight. I grabbed it and booked you."

With two agents working the desk, I got immediate attention and inquired about a later flight that evening out of Newark. "We have a flight but it's totally sold out," she said.

Other options were no better: a connecting flight through Frankfurt, Germany was so close to departure that the airline would not allow a booking. An available flight out of JFK airport was complicated by an unpredictable 90-minute ride and a shrinking window till departure.

I had to make a quick decision: stick with my original flight (still scheduled to depart) or the risky option of JFK. 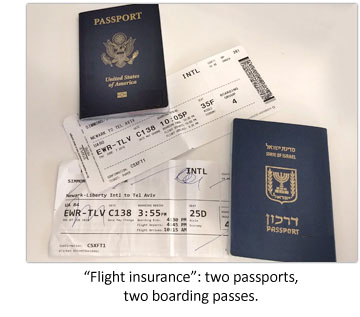 At that moment, the customer service agent looked up from her computer screen and calmly said, "One seat just became available on the later flight out of Newark. I grabbed it and booked you." (The man who'd arrived first to the Customer Service Desk needed two seats.)

"What about my original flight?"

"You have boarding passes for both flights. Whichever flight leaves earlier, take it."

As I settled in at the gate I got a notice on my phone that my original flight was cancelled. The pilot and flight crew, having clocked in many hours earlier, were now barred from flying by aviation law and union rules. They went home and the passengers were stranded.

A few hours later I was seated on the plane home. Of the 300 people on my original flight, only two (another man was first in stand-by) managed to reach Israel before Shabbat.

After a delay of two hours (due to a "mechanical issue"), the plane finally took off – eventually landing in Israel so close to Shabbat that in 10 minutes my wife who came to pick me up would have driven home without me.

On the ride home (thankfully, we live close to the airport), I reflected on the incredible providence of it all. Had I not lost my U.S. passport, I never would have gotten to the Customer Service Desk so fast, and would not have obtained that coveted single seat on the later flight. In Newark Airport, I felt God guiding me toward the right destination... home for Shabbat.

Winking at the Angel of Death

The Chain of Life

Why I Don't Need to Believe in God