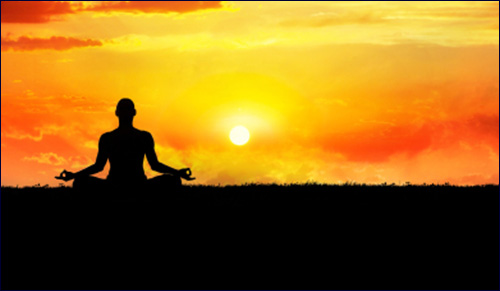 A yoga teacher encounters Jewish spirituality with religious Jews in Israel for the first time.

We do yoga to become steadier, expand our comfort zones and practice falling gracefully. We coordinate movement with breath and body with mind. Yoga helps us cope with life and even thrive.

Patanjali’s Yoga Sutras instruct us on how to achieve yoga, or union, between the soul and the Infinite. So try as we might to ignore God, eventually we have to talk about it.

I first felt the presence of God when I was 26 and traveling in Israel. A nonprofit organization sponsored a free trip for Jews who had never before visited.

They showed me what happens when God is the motive of actions. As it turns out, yoga happens.

When the plane landed in Tel Aviv, the tour guides said “welcome home”. Because my ancestors were Jewish, they considered Israel my spiritual homeland.

The guides were Orthodox Jews in their 20s. For two weeks they surrounded us with practicing Orthodox men and women from all aspects of the community. Collectively, they showed me what happens when God is the motive of actions. As it turns out, yoga happens.

It was easy to believe in God in Jerusalem because even mundane events are given ritual status. I was taught to touch the mezuzah (containing a scroll with Torah verses) when passing through a doorway. The Orthodox also pray upon waking up, eating, washing hands, seeing a rainbow.

God was everywhere. When we told Seth he has a beautiful smile, he said, “If so, Thank God.” He wouldn’t take credit.

Patanjali’s Yoga Sutra 2.45 says that the way to achieve Samadhi (union with the Divine) is, "Ishvara Pranidhana". That translates to "Surrender to the Highest" or "Dedication to the Highest". In Israel, regardless of time or circumstance, people were dedicating their actions to God. It was inspiring to be mindful of the little things and plug into something bigger than individual ambition.

Yoga teachers may cue us to “let go” of tension, expectation or self-doubt. That really means “Surrender yourself. Stop fighting for control.”

There’s never really a “safe” time to visit Israel. After the two week program ended, some of us stayed longer to explore on our own. While we waited at a rural bus stop in the mountains, three rockets landed on the hill behind us.

We scrambled for a few minutes, then got whisked away by a taxi. We returned to our hostel in Tsfat where the locals said, “Don’t worry. The rockets can’t reach this far south from the border. The closest they ever came was 13 miles.”

The Israelis didn't get wrapped up in the drama of war. I assumed it was because they were used to bouts of violence. But really they just weren't wrapped up in the material world. They were following a basic yogic message to turn away from this transient, joyless world and take delight in God instead. They were calm because they recognized God as more important than the physical world.

The building shook each time a rocket landed and we Americans were feeling tense and anxious. We went to the rooftop for a night yoga session. That was, to date, one of my favorite yoga sessions and marked a turning point in my practice.

Avidya, ignorance, is described in Yoga Sutra 2.5 as “mistaking the impermanent for the permanent.” Avidya had always plagued my asana practice because I’d let myself get distracted by the whiny complaints of the physical body.

On the roof that night I found vidya, clarity. The physical body and pose alignment became less important as I absorbed the concept of impermanence. I found a calm steadiness that would not have been possible without examples from the Orthodox around me.

In yoga classes we might practice how to hold plank pose for a minute. The practice is more than strong wrists, arms and legs. The practice is silencing the complaints of the temporary body and sourcing our power from something higher. When we can do this we have a chance at being steady in our lives off the yoga mat, like Israelis in the face of war.

We switched our home base to Jerusalem because it seemed safer and is beautiful. The next time we saw our tour guide friends was at the wedding for the youngest guide.

Maya was 19. In the weeks leading up to her wedding she asked, “What does it feel like to hold hands with a boy?” As is custom, she had never flirted or dated.

On her wedding night, we danced furiously in a circle of hundreds of women. Maya didn’t care about sweating in her wedding dress. Her husband-to-be approached with a parade of men behind him. He was shaking with nerves and needed to be supported by both of his elbows.

Under the chuppah (wedding canopy) they went through many rituals and prayers. Their wedding signified all their past mistakes being forgiven and two souls becoming one.

After the ceremony, the couple was escorted to a private room and left alone for about 20 minutes. Their lifetimes of celibacy made these moments exponentially more special.

Abstinence seemed berserk until I saw Maya’s confidence and healthy self-image. Most women I know have at some point used their body to manipulate a relationship. We often make poor choices. In these ways, we harm ourselves. Maya instead practices ahimsa, non-harming, toward herself.

It isn’t hard for Maya to practice ahimsa because she also practices Brahmacharya or “Walking with God”. Yoga Sutra 2.38 says, “When walking in the awareness of God, the yogi gains great strength and vitality.” If we give our focus to God, our actions are more likely to be noble.

In the Orthodox Jewish community everyone is supported and encouraged to live with God in all moments. While that looks different for each person, collectively they showed me that it can be done. Thank God.

This article originally appeared on a popular yoga blog.

My Neighbors, My Heroes, Part 2
The Promise Of The Land
Which Chat Are You On?: Parshas Behar/Lag Ba’Omer
Do You Like Slow-Cooked Food? Thank the Jews
Comments
MOST POPULAR IN Spiritual Odysseys
Our privacy policy