Daredevil on the Bridge 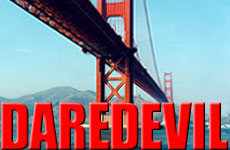 Clarity sometimes comes when you least expect it.

San Francisco. A chilly November morning. My friend and I stood at the midway point of the Golden Gate Bridge. We both looked down. Then he climbed over the 3-foot-high fence, slithered onto the catwalk below, and jumped.

No, this was not a suicide. My friend was attempting to set the world record for the longest Tarzan swing.

I had met Steve a few months earlier, on the day that he'd gone over Niagara Falls in a barrel. Steve was trying to attract attention in order to boost his career as a Hollywood stunt man. I found him down at the local TV station, fielding reporters' calls from Melbourne to Tokyo, and making a deal to sell videotape of his barrel ride.

Good-looking, vivacious, age 25, Steve became an instant celebrity. He was the youngest person ever to survive a barrel ride over the Falls, and the first American in 25 years to do so. The next morning, Steve was a guest on The Today Show, and was hailed by banner headlines in USA Today, The New York Post, and hundreds of newspapers around the world.

I, too, was attracted to Steve's courage and charisma, and we became fast friends.

The momentum continued unabated. By week's end, Steve's photo had appeared in Newsweek magazine, and he was in LA as the guest of Johnny Carson on the Tonight Show. Then it was back to New York and the studio of a posh New York fashion photographer, having been selected by Mademoiselle magazine as "one of the 10 coolest men in the world."

"My birthday is coming up soon, and I want to celebrate it with a high-profile stunt," Steve told me. "I'm going to do a Tarzan swing off the Golden Gate Bridge."

He would jump off the bridge and swing like Tarzan from the vine.

He explained how it would work: Since the water of San Francisco Bay is 260 feet below the bridge, Steve planned to tie a 250-foot-long rope to the center of the span, and then position himself at the end of the rope – 250-feet away from the point of attachment. He would jump off the bridge and swing in a free-form arc, just above water level – almost like Tarzan swinging from a vine. The only difference being that Steve would swing back and forth, eventually coming to a standstill.

I tried to discourage him. "What do you need this for?" I asked. "You've already achieved enormous public acclaim, and no other stunt can compare to the Falls. This will be a step backward in your career."

But Steve would not be dissuaded. "I'm going. I want a special thrill for my birthday," he said.

I figured I might as well go along for the ride.

Two days before Steve's 26th birthday, when our plane touched down in San Francisco, we headed straight for the hardware store. Hooks and rope, that's all Steve needed.

Our biggest problem was how to film this momentous event. Since the Golden Gate Bridge is over a mile long, the center of the bridge – where Steve planned to perform the stunt – was too far from shore for photographers to get a good shot. The only option was a boat (positioned in front of the bridge), or a helicopter. We chose the latter; it was much more hi-tech. 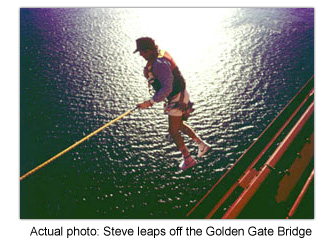 Because Steve's stunt involved illegal trespassing, everything had to be ready before the workmen came out to paint the bridge at 7 a.m. So the night before, we drove to the midway point of the bridge, where Steve got out, climbed over the fence, and attached his rope to the catwalk on the underside of the bridge. Phase one accomplished.

The rope had to be taut, so that when Steve jumped he would swing in a perfect arc. Otherwise, he would be freefalling at 70 miles an hour and would likely snap his bones.

Steve also had a small wood disc attached to the end of the rope to serve as a seat. Otherwise he could never have held onto the rope; the centrifugal force would have sent him crashing into the waters of San Francisco Bay.

Waiting for the helicopter to arrive, I was struck by the absurdity of it all.

We waited for the helicopter to arrive, and I had a few minutes to think. Here we were, about to perform a stunt that would be reported the next day on the front page of newspapers around the world. I was struck by the absurdity of it all. Is this actually the most important event in the world today? Does this hold value in the greater scheme of things? Is this what society should be glorifying?

The chopper came into view, the sound of its blades cutting through the crisp morning air. The videographer hung precariously out the window straining to get the best angle.

I felt sick to my stomach. Is this where I want to be putting my time and energy? Have I been consigned to a life of promoting trivial acts of entertainment?

At that moment, I made a commitment to find a better way.

Steve jumped, swung in a magnificent arc for a few minutes, and then dropped down into the water. Unscathed, he was taken ashore by the Coast Guard, and turned over to the police for questioning.

I followed through on my commitment, and a few weeks later I was in Jerusalem. (Being Jewish, I figured that was the logical place to start.)

One day I was looking at a bulletin board, casually reading some of the postings. One in particular caught my eye:

"I accidentally broke a blue coffee mug. If it's yours, please see me so I can compensate you. Signed, John Doe."

Those few words hit me hard. I had come from a world of material pursuit, dog-eat-dog, get what you can and don't get caught – and now I found something quite different. The contrast was stark.

John could have broken the mug, kept quiet, and nobody would have known. But he was determined to set things straight.

What matters is not ego-boosting hype, but taking responsibility for one's actions.

This is interesting, I thought. What matters here is not the bombastic display of ego-boosting hype, but taking responsibility for one's actions, fairness to others, and a clear conscience.

I wondered: With effort and commitment, why couldn't the whole world work this way?

Or at least, maybe my world could work this way.

I pursued the source of this innocuous note, and it led me to a college of Jewish studies. There I found a group of young people, like myself, who sought to nourish their spiritual-ethical yearnings with the intellectual idealism of Torah values. The backgrounds were varied, but the common denominator was a longing for truth, and a striving for personal perfection.

There's more to the story. A week later, I passed by that same bulletin board and noticed something that impacted me immensely. Whoever broke the coffee mug had crossed out the word "accidentally" and wrote instead "negligently." His conscience could not rest until he acted with total integrity.

I thought back to tattered, yellowed photographs of my European ancestors, and began to understand why a long line of generations had clung so tenaciously to their Jewish values in an often-turbulent world.

The brush with death gave him a momentary feeling of life.

And what about Steve? His Hollywood career never got off the ground. The stunts, I came to realize, were less a professional pursuit, and more a way to bring thrill to his life. The brush with death, apparently, gave him a momentary feeling of life. But it was all artificial, and ultimately could never satisfy. And, like an addict, Steve constantly needed newer, bigger boosts.

Over the years, Steve and I lost contact. I heard his name mentioned on the news twice over the years: Once when he went over Niagara Falls in a barrel (again), and once when he fell out of a tree and broke his neck.

As for me, I am grateful for that chilly November morning on the bridge. Steve was a daredevil, but in a way he became my angel. Fifteen years later, I have never looked back.

The Emergency Call & the Anti-Semite

Rabbi on Ventilator for 4 Months is Leaving Hospital

My Battle with Covid-19
The Jewish History of Prague
Why the Sexual Revolution was Bad for Women
The Princess: Sukkot
Comments
MOST POPULAR IN Spirituality
Our privacy policy
Aish.com Is Looking for Great Writers