How Judaism Took Me Out Of My Depression 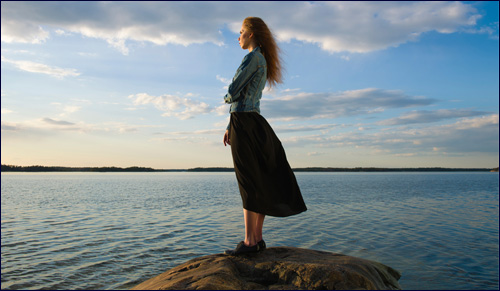 Converting to Judaism had an unexpected side effect: my depression became much less prominent in my life.

I’ve had depression ever since I was a kid. At some points in my life, it’s been so bad that going from one day to the next felt like trying to run through quicksand. During these times, it felt pointless to do anything.

It didn’t help that I was an atheist who believed that life had no meaning other than the here and now. You’re born by accident. You are a little tiny speck in this vast universe and it didn’t matter very much whether you lived or died. All you have is the present, so you better live it up before you’re dead. Forever.

Faced with this stark truth, I spent many hours of my teenage years in bed, not wanting to get up and face the world. I’d sit around and watch sad movies that often revolved around characters being so deeply depressed that they wanted to take their own lives, like Girl, Interrupted and The Virgin Suicides. I wasn’t suicidal but I identified with these characters because I felt apathetic towards life.

Throughout my college years, my depression got worse as I felt the crushing weight of adulthood settling in. I was supposedly the captain of my ship and I had no idea if I was going on the right path. There were no signs or indications that what I was doing mattered.

I started having panic attacks about my future and wasn’t able to sleep at night. I’d spend many nights lying in my bed until 6 AM, finally falling asleep as the sun was rising. I had goals to be a writer and work in entertainment, but I had the gnawing question: for what purpose?

Then, in my early 20s, I started dating a Jewish man, got turned on to Judaism and decided to convert. And I discovered an unexpected side effect of converting: my depression began to become much less prominent in my life.

A lot of it had to do with the Jewish wisdom and values I began incorporating into my life. I learned through Judaism that every person is, in fact, special. Everybody has a unique mission. God entrusts us with a body and a soul, and we are obligated to treat ourselves well.

Learning about Judaism’s emphasis on life motivated me to take better care of myself.

Learning about Judaism’s emphasis on life motivated me to take better care of myself. I joined a gym and found a therapist. I started giving money to homeless people I passed on the street because they needed the help. I stopped watching movies and shows that would make me sad and instead watched ones that would lift my spirits. I took on studying more Torah and observing more mitzvot because I found that the structure and organization to my life was comforting and uplifting, and helped to keep my depression at bay.

Now when I catch myself falling into a state of sadness, which happens maybe once every three months, I force myself out of it. Instead of wallowing in it like I used to, I recalibrate and focus on the Jewish values I want to live by and strive to give them the head seat at my mind’s table.

For example, Judaism teaches us to be thankful and appreciative for everything we have. In the past, I’d focus on what I didn’t have, like a nice car, a new computer, and designer clothing. I’d even yearn for things I had no control over like a faster metabolism and rich parents. Then I‘d be all set. Now I think, “Thank God I have a working body! I can see and hear; I can eat properly and walk.” “I’m so grateful that both of my parents are alive and healthy and in my life.”

Just thinking about the simple things has the power to take me out of those dark places whenever I find myself falling into them again. Instead of getting into a negative thought process in my head, I try to think of as many positive thoughts as possible.

Becoming a Jew has also enabled me to become part of a community. I’ve made friends, found rabbis who could guide me, and celebrate Shabbat and the holidays with people in my neighborhood. The social connections I’ve made have profoundly helped in my journey in recovering from chronic depression.

I do give myself times to be sad when it’s necessary. My husband is a comedian and tours all the time, and it makes me incredibly sad when he has to go away and I’m stuck at home. I used to get very lonely and depressed, and try to eat myself into feeling numb so I wouldn’t have to feel upset. Nowadays, I thank God that he has gigs. I schedule coffee dates with friends and colleagues when he’s away, learn some new recipes, and spend quality time with my dogs. I prepare myself to combat my triggers, which are social isolation and boredom, and find productive ways out of it.

One of the most effective tools is learning Torah. I love learning Jewish wisdom; it has a positive impact on my life. The Torah is the original Tony Robbins. It gives me the tools to live life to the fullest and appreciate that life is a precious gift; no second should be wasted.

I discovered that I have the power to think myself out of my depression.

Through the discipline that Judaism requires (keeping kosher and fasting on certain days springs to mind), I’ve also discovered that I have control over my mind. Yes, there are chemical imbalances in people’s brains that necessitate medication, and there have been times in my life when I’ve had to take medicine, eat certain things, and go to therapy to deal with my depression. There is no shame in that. But I have also discovered that I have the power to think myself out of my depression. (I’m not saying everyone can; for some people depression is a sickness that simply requires medication.)

Hey, if I can resist my once favorite food – crabs – and not check my cell-phone one day a week, which I’m otherwise addicted to, then I can choose to change my attitudes and thoughts and live in synch with Jewish values, and be happy.

Six Questions to Empower Yourself

My Battle with the Bulge: Four Key Takeaways on How to Change
Is Grease the Word?
Dried Fruit Compote
Scientific Curiosity and the Divine Encounter
Comments
MOST POPULAR IN Spirituality
Our privacy policy
Aish.com Is Looking for Great Writers