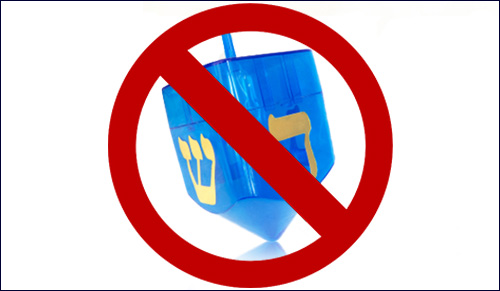 The company inadvertently reminds us the meaning of the holiday.

The giant craft-store chain announced this about-face after a blogger accused it of anti-Semitism because it refused to carry Hanukah or Jewish-themed craft products, a claim the company denies.

Claims that Hobby Lobby is somehow anti-Jewish have been filling the blogosphere, ever since a Jewish shopper in New Jersey asked a Hobby Lobby sales clerk why there were no Hanukkah items in their “holiday” display, and was allegedly told because “we don’t cater to you people”.

When it landed in my in-box, I wondered if it was true. Why not call up my own local Hobby Lobby, myself, I thought, and see what they had to say?

“Um” I began, feeling very self-conscious, “I was just wondering – do you carry Hanukkah decorations?”

“No” the saleswoman said immediately.

“Really?” I asked, intrigued, all traces of embarrassment gone – “why ever not?”

“I don’t know” the woman replied, again a little too quick, I thought.

“Do you sell any Jewish-themed decorations” I pressed? “Like – um – stars or cards or stuff?”

“No,” came the brisk reply.

“Do you think you’ll be getting any in?” I groped.

“I don’t know” was her quick answer, and our conversation was done.

The publicity over Hobby Lobby’s refusal to carry Hanukkah items came to light when a blogger in New Jersey, hearing about his friend’s allegedly rude treatment in her local store, called the company headquarters in Oklahoma and was told – bizarrely – that Hobby Lobby had a policy of not carrying Jewish items due to the strong “values” of the owner, Steve Green.

If that name is familiar, it’s because Hobby Lobby owner and multimillionaire Mr. Green has been in the news a lot lately. A committed Christian, he’s currently a litigant in a case that’s been sent to the Supreme Court over the right of his private company not to fund employee health plans that include contraception.

And in the midst of the Hobby Lobby Hanukkah decoration flap, Mr. Green – who is an avid collector of religious works – unveiled a 1,200 year old Jewish prayer book he’d just bought from a private collector.

Wondering how he’d explain his refusal to stock Jewish items – and if it is in fact a policy at all – I e-mailed Mr. Green, asking him if it was really true he objected to Jewish objects being sold in his stores.

Steve Green didn’t reply, but someone named Joel Jackson of customer service did. No, Hobby Lobby doesn’t carry Jewish items, he explained, but my “request has been shared” with his product buyer: they also, he added, appreciate my business.

“What business?” I huffed, as I pressed delete on his e-mail.

As soon as I did, though, I had to laugh at the irony. Here I was, irate that Hobby Lobby won’t sell me Hanukkah supplies – when Hanukkah itself is all about having the strength to be separate, to resist the pull of being just like everyone else.

Perhaps Hobby Lobby’s refusal to stock Hanukkah supplies outraged me so much because in so many other areas in the United States and other countries today, it can feel effortless to be Jewish. In the US, where we don’t have to risk our lives to worship freely, where Jews are accepted as another ethnic group out of many, encountering a chain store that refuses to cater to Jews comes as a rude shock: one of the few reminders we have that in some senses, we still might be separate.

The most prominent symbol of Hanukkah is the menorah: the eight-branched candelabra that we light each night of the holiday.

It recalls the miracle of the oil, when a small band of Jewish fighters – after defeating the mighty Syrian-Greek army – rededicated the holy Temple in Jerusalem. Finding nearly everything defiled, they were able to locate one remaining jar of oil, which they used to kindle the Temple’s menorah: instead of burning for only one day, it lasted for eight days.

It’s customary to light our menorahs in a window, to publicize this miracle. And their miracle is ours too. When we light the Hanukkah lights, the blessing we say is in the present tense: we thank God for performing miracles of our ancestors, and equally today.

On October 4, 2013, the president of Hobby Lobby issued a public apology to Jewish customers who were offended, and said some stores might stock Jewish items in future. He also called the New Jersey blogger who first brought attention to the situation to defuse tensions.

All this is great news for countless Jewish crafters, who soon might enjoy the chain’s help in making their Hanukkahs even more special. But perhaps this season – when our thoughts begin to turn to planning our Hanukkah celebrations, Hobby Lobby’s done us a favor.

They’ve made us remember for a moment that we as Jews are sometimes separate, not only in the past, but even today – even in the United States, too. That Hanukkah’s not just another winter-themed holiday, but a time to remember what it means to be special, to be separate.