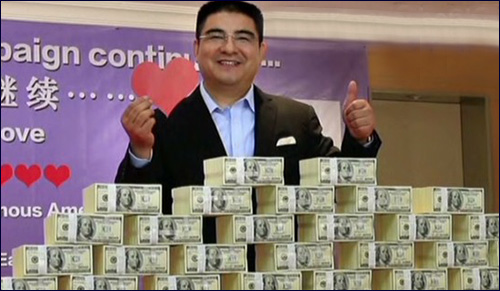 A Chinese millionaire’s largesse to NY’s homeless spins out of control.

Chen Guangbiao describes himself on his business cards as “Most Influential Person in China” and “Most Well-known and Beloved Chinese Role Model.”

Mr. Chen, a wealthy recycling magnate, is well-known for public relations stunts in China; he has handed out money on the street there, built walls out of cash he intends to donate, danced on the roofs of cars he was about to give away, and flew burn victims to the United States for medical treatment. While critics in China deplore his high-profile acts as mere publicity-seeking, Mr. Chen insists he is motivated by a desire to help the world’s poor and to inspire others to follow his example to give charity, as well.

On June 25, 2014, Mr. Chen brought his unique brand of high-profile charity to New York. Inspired to do something, he said, by seeing homeless New Yorkers rooting through garbage cans, Mr. Chen took out a full-page article in the New York Times: “Leading Chinese philanthropist teams up with famous American charities to host charity luncheon for 1,000 poor and destitute Americans…. Each will receive $300.”

To fill his luncheon venue – the prestigious Loeb Boathouse in New York’s Central Park – Mr. Chen turned to the New York City Rescue Mission. They were to supply the homeless guests; Mr. Chen would do the rest.

At the Boathouse, plans quickly began to fall apart. Only 250 homeless people were allowed in. Craig Mayes, the Mission’s executive director, had cautioned Mr. Chen not to hand out the cash he promised; the homeless guests, he explained, might use it to buy alcohol or drugs. Instead, Mr. Chen was to donate $90,000 to the Mission. But as the lavish luncheon got underway – one homeless guest enthused it was like being a billionaire for a day – Mr. Chen announced his intention to give $300 to each guest, after all. The guests whooped and cheered with delight.

Until Mission officials quickly stepped in and threatened to call the police. After an awkward conference, Mr. Chen agreed to hand out bags containing $300 to guests – on condition that they return the money afterwards.

“Are you serious?” one man asked, crestfallen. “I feel so disappointed right now.” Turns out the whole affair was one big publicity stunt that left a number of people angry and deceived.

If Mr. Chen is serious about inspiring others to copy his many acts of charity, he’d better plan future events more carefully and take a look at Jewish wisdom on giving charity.

The very word for charity in Hebrew gives a hint about the radically different way that Judaism views giving and supporting the poor. The English word “charity” comes from Latin carus, which means ”dear one.” It implies that we financially help people because we feel emotionally inclined to.

The Hebrew word for charity is very different: tzedakah, from the Hebrew word tzedek, righteous, just. In Judaism, giving charity isn’t something we do only because we’re moved by a particular person’s plight, or because we like a specific recipient of our largess. It’s something we know we have to do, because it’s right. Each of us has an obligation to give charity, to help others who are less fortunate than ourselves, whether or not we feel like it.

What’s the best way to give? Maimonides described eight levels of charity. The highest levels seek to avoid all embarrassment on the part of the recipients. The best charity is given anonymously, and the very best way to give is to help someone become financially independent so that they don’t need charity at all.

Years ago, I got a powerful lesson in how putting these Jewish ideals of charity into practice looks up close. A friend of mine confided that they had recently heard from an acquaintance that things were bad at home. Both parents had lost their jobs and their tempers were getting frayed. For a long time, they’d put on a brave face, but it was becoming increasingly difficult to hide their financial and emotional problems. The beginning of the school year was looming, and there was no way they could register their child for the Jewish school they’d attended for years. Their problems were about to spill out publicly when their child would fail to show up on the first day of school.

“I’m going to offer to pay their tuition,” my friend told me over the phone. “Are you kidding?” I asked. My friend was comfortable, but hardly rich. I knew the couple both worked long hours to afford to send their own kids to private school.

“We can afford it,” my friend insisted, and explained that while it might be difficult, it wouldn’t be impossible. “We’ll instruct the school to make it an anonymous scholarship so that the family would never feel embarrassed about accepting charity from people they knew. They might not accept charity from acquaintances, but if it came from an anonymous-sounding source, they’d be more comfortable availing themselves of help.”

My friend never mentioned the offer to me again. When I asked about it later on, they brushed off my questions, saying “it’s nothing. ” For them, giving was an intensely private affair; their main concern was not causing the object of their largess any distress.

Helping others of course benefits the objects of our largess. What’s less often realized is that when we give to others, sometimes the biggest gains come to us.

Back to the Dark Ages
In the Shadow of David and Goliath
Where Do the Laws of Nature Come From?
Saadiah Gaon, Rashi and Maimonides: How Three Rabbis Revolutionized Judaism
Comments