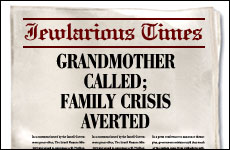 JEWLARIOUS SATIRE: Estelle Coplowitz was called at 11:30 pm EST this past Sunday evening. If the phone had gone silent for another 30 minutes into Monday, Shabbos dinners for the Coplowitz family would never have been the same again. 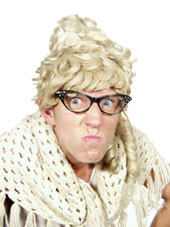 Mrs. Coplowitz is an 86-year-old resident of the Moses Maimonedes Retirement Residence for the Aged. Her family was away on a vacation in the South of France for two weeks where they claim that they were unable to contact the family matriarch. As a result, she threatened the residence's administration that if her family didn't call by Monday, she would begin staging a hunger strike. Said Mrs. Coplowitz, "This hunger strike is not my choice. I just want the love of my sweet little grandchildren. Why don't they love their poor old Bubbie?"

"Mrs. Coplowitz gets very upset if her family doesn't call her," said residence manager Dianne Ames. "When she didn't get a phone call for about 10 days straight she was livid. She told me that if her phone didn't ring by the 14 day mark of the family vacation, then she would stop eating food entirely. She did confide in me however," admits Ames "that she would continue to eat the cokosh and egg noodle kugel because it reminds her of her Aunt Flossy."

"She would continue to eat the cokosh and egg noodle kugel because it reminds her of her Aunt Flossy."

For their part, the Coplowitz family regrets that their mother and grandmother had to threaten such drastic action to get their attention. "To tell you the truth," said an exasperated grandson Jeremy Coplowitz, "we called and left a few messages but she doesn't know how to use the answering machine properly. And with the time difference, it's hard to get her in her room to talk to her, because she is usually at one of the activities like aqua-aerobics, or challah baking."

Estelle Coplowitz maintains that her actions were justified. "What kind of family leaves the country and doesn't call their mother and grandmother for two weeks? I know they are on vacation in France, but are they too busy for me? Are they meeting with [French President] Jacques Chiraq or something? You know, I am sure Mr. Chiraq calls his mother when he is traveling around the world. Are my kids busier than Jacque Chiraq? Are they wrestling with high unemployment, unruly North African youth and a confused foreign policy? Considering how nice Jacques is to his mother, perhaps he would like to get to know me as well. He might be interested to know how much my stock portfolio has gone up in value, and what a large inheritance I will be leaving behind one day.

"In fact, maybe this year, I won't spend Passover in New Jersey with my family at all, but in Paris with Mr. Chiraq instead. I am sure he can lead a good seder. And I know he won't be able to resist my special home made macaroons and chocolate covered matzah."