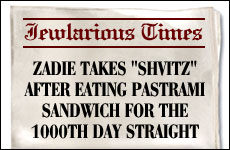 Morris Rosenberg, known to friends and family simply as "Zadie" has done the seemingly impossible.

Morris Rosenberg, known to friends and family simply as "Zadie" has done the seemingly impossible: he has taken a shvitz -- gone to the steam room -- after eating a pastrami sandwich for almost three years straight, without missing a single day.

"He's the Cal Ripken of the shvitz," exclaimed friend and admirer Herman Hirschfield comparing Rosenberg to the famous baseball iron man. "I don't know how he does it. I can't even go to the shvitz for three days in a row before I start turning into a prune. But 1000 days in a row? I would look like one of the California Raisins. But Zaidie is amazing!"

Morris "Zadie" Rosenberg is taking it all in stride. "I don't really know what all of the fuss is about," he said humbly. "I go to the JCC [Jewish Community Center] for lunch every day at 11 AM. I eat a pastrami sandwich with some pickles and mustard -- and sometimes a little relish. But don't tell my doctor, because he said relish is bad for my diabetes because it's too high in sugar. After the sandwich, I go sit in the shvitz for an hour or so to burn off the calories. On Saturday's I go once Shabbas is over, after my Melave Malka. I used to walk on the treadmill, but sitting is much easier than walking. "

Rosenberg is not without his detractors however. "Ralph" who works in the JCC Pro-shop cannot disguise his disapproval. "All of the attention Zaidie Rosenberg is getting is ridiculous! He is eating a sandwich and going to the steam room -- all he is doing is chewing and sitting down. Now, if you could...let's say... play a game of racquetball every day for three years -- that would be impressive." Ralph is co-president of the JCC senior's racquetball league.

For his part, Rosenberg is not put off by the criticism. "1000 days in a row -- that's a lot of pastrami you know. But some people aren't impressed. What can I do? Maybe they will prefer my new project: a smoked meat sandwich for dinner every night followed by watching an episode of Jeopardy. I love that Alex Trebec. But I hear he has diabetes like me. Nebuch, it's such a terrible sickness for such a nice young man."

WouldJew Believe #8
Evolution 2.0: The Coming Darwinian Revolution
Chukat 5782: Let’s Play the Blame Game!
The Sin of Moses: The Two Ways to Communicate
Comments
MOST POPULAR IN Jewlarious
Our privacy policy