God, Why Are You Doing This to Me? 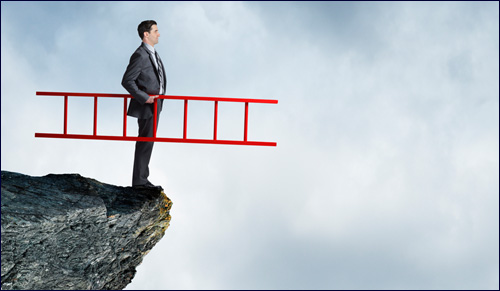 How my husband’s illness changed our lives.

Five years ago, a storm hit that transformed our lives in ways my husband and I could never imagine.

A few months before our youngest child Jaclyn was to become a bat mitzvah, my husband Alan got sick. What seemed like the flu morphed into a serious illness. He had fevers every night, shortness of breath, and became weaker by the day. Alan underwent endless tests, x-rays, and an MRI. He warned the radiologist that he had a quarter in his intestine from having swallowed it 30 years ago in college during a beer drinking game. The radiologist assured him the quarter would pose no danger when undergoing the MRI. The doctors, including his internist and infectious disease experts, were perplexed. We were presented with the possibility of virtually every serious diagnosis from a mass on the kidney to leukemia.

Alan couldn’t speak at our daughter’s bat mitzvah; he could barely make it to the end of the driveway to pick up the morning paper.

I felt lost and rejected by God. Why are we being punished like this?

A few days later when Alan could barely walk or breathe, I insisted he go to the ER. My husband was dying before my eyes and I needed answers. I felt lost and rejected by God. I called Rebbetzin Devorah Buxbaum crying, “Why are we being punished like this?”

“What test?” I wondered. I was so confused. 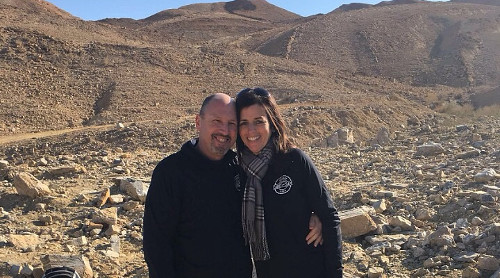 Sheri and Alan in Mitzpe Ramon

The fevers and shortness of breath remained and Alan was alarmingly frail and thin. I remember driving to the hospital each day feeling scared and helpless. Not one in the practice of having conversations with God, I found myself repeating, “Please God, let it be a curable infection.”

Knowing my husband had a history of Crohn’s disease, I insisted on bringing in Dr. Barry Rubin, a gastroenterologist, for a consult despite being met with skepticism by the hospitalists. Dr. Rubin interviewed Alan for five minutes and instinctively ordered an abdominal X-ray. Dr. Rubin and colorectal surgeon Dr. Bradley Bennett hovered excitedly over Alan’s X-ray. I realized at that moment we would finally get some answers.

The doctors explained that the quarter had perforated Alan’s small bowel which led to the growth of a large abscess embedded into his intestines, muscle and ureter. The surgery was successful, but Dr. Bennett had to give Alan a colostomy (a surgically created opening in the abdominal wall through which digested food passes) because he wasn’t able to resect the intestine in both places where the abscess had invaded. Dr. Bennett explained that he would perform a reversal colostomy in six months. Alan remained in the hospital for two more weeks and while he was quite stressed about the health of his orthodontic practice, I was incredibly grateful to know that my husband was in good hands and on the road to recovery.

“You won’t believe how good you will start to feel,” reassured Dr. Bennett, “you have been sick for so long.” 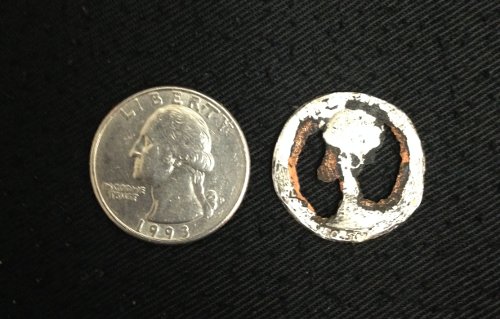 Alan returned home three weeks after I brought him to the hospital on a Friday. He was discharged with a pic line, drainage tubes protruding from his abdomen, a stent in his ureter, a healing open wound, and a fresh colostomy. The days ahead were not easy, but thank God he started gaining weight and strength as his health was restored. He exhibited incredible stoicism both during his recovery and living with his colostomy. He even joked that should he ever need to use a bathroom while golfing he wouldn’t have to leave the course. We both anticipated the upcoming reversal surgery with excitement and a bit of trepidation.

Unfortunately, our eagerness to put everything behind us was short lived. Alan’s colostomy reversal failed, which rarely happens, and peritonitis, a potentially fatal inflammation of the abdomen’s lining, set in. Dr. Bennett had to perform an emergency colostomy surgery. Alan was in ICU for several days and it was pretty scary. He slowly improved and was sent home two weeks later with Dr. Bennett’s reassurance that he could attempt a reversal in a year.

We were definitely feeling tested and weren’t equipped to make sense of it all. I knew Alan felt dejected, but I also knew that he was too young to give up on having the colostomy reversed. Without it, Alan would have had to live with a waste bag attached to him for life. A year later, we were back at the hospital for the reversal. Even though the surgery was successful, we did not breathe any sighs of relief. We knew only time would tell if the reversal would actually work this time.

Three days later Alan was in the hospital bathroom and I heard him crying. My heart sank as I thought the worst. “Are you okay?!”

While it might sound funny, for someone who has not experienced the body’s ability to void on its own into a commode, after 18 months, it was a moment of intense gratitude.

After this experience, I knew that I had to make changes in my life and it felt right to turn to Judaism for answers. I was thirsty for meaning and truth. One powerful moment came when Rebbetzin Devorah Buxbaum taught me about the beautiful prayer Jews recite after using the bathroom called Asher Yatzar, thanking God for “creating man with many openings and many cavities.” The blessing concludes by describing God as “the One Who heals all flesh and acts wondrously.”

Until my husband’s illness, I never associated using the bathroom with a miracle, but I certainly appreciate this now.

Until my husband’s illness, I never associated using the bathroom with a miracle, but I certainly appreciate this now. In fact I am far more aware and amazed by the infinite miracles that God performs for me every day.

For me, prayer has become my pipeline to God, a daily opportunity to express my gratitude for the miracles He performs for me and my family. I started with baby steps. After traveling to Israel as a JWRP participant, I received my personal siddur and carried it to the Kotel to recite the special prayer. After returning from Israel, I started reciting the morning blessing so I could begin each day with the right frame of mind. And then I began to spend an hour every week learning Torah with Sima Krischer, a wonderful study partner who lovingly guided me through the siddur until I was comfortable going solo. 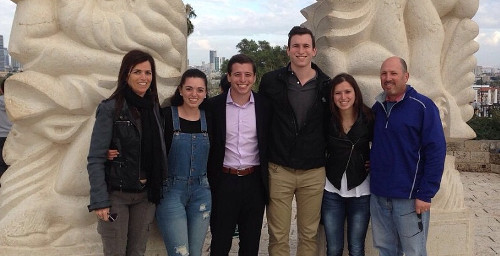 Sheri and Alan and their family.

I used to spend a huge amount of time and energy worrying about details and situations in my life, but I have changed my mindset. Instead of asking God, “Why are You doing this to me?” I try to remember that God is loving, deeply cares for me, and everything He does is for my benefit. I try to focus that God knows what is good for me and to actively look for that good especially during challenging times. As the Talmud says, “Gam zu l’tovah – this too is for the good.”

So in addition to my physical workout every morning, I’m giving my soul a workout too. I am discovering the power of emunah, deep-seated faith to center me throughout my day in the best possible way.