Getting Creative with Latkes and Donuts 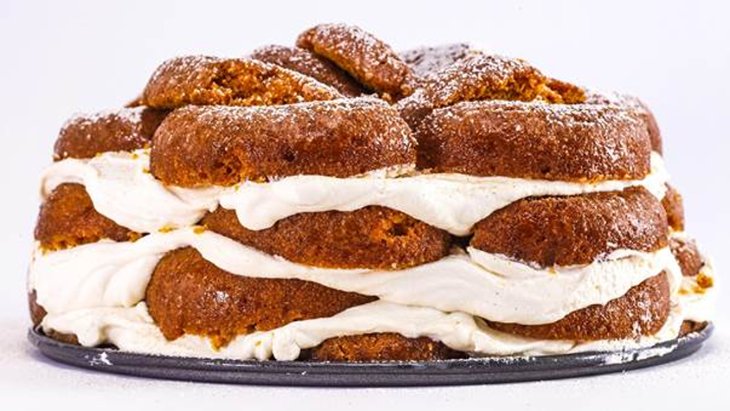 Get in the festive mood with these creative recipes that put a new spin on traditional latkes and donuts.

Eight days and nights of Hanukkah calls for extra creativity and energy for latke making and donut creations. I start the week with traditional latkes but tend to get fun and unique as the week goes on depending on the crowd, the party, or my latest brainstorm. Today I’m sharing latke tips, recipes, and few varieties that are both delicious and a bit different. And a few donut creations that puts everyone in an extra festive Hanukkah good mood.

Prepare your setup. Heat the oven and prep a baking sheet with a wire cooling rack, so latkes can stay warm and crisp. Prepare a paper towel-lined baking pan ready to receive hot latkes for draining.

Squeeze the potatoes and onion dry. To get crispy latkes, the potato and onion mixture needs to be dry. Use a strainer lined with a paper towel or a cheesecloth.

Fry the latkes. Heat the oil (and schmaltz, if using) and make sure it's hot before frying. The latkes should sizzle immediately upon entering the oil. Fry until each side is dark golden-brown.

Drain and serve. Remove hot, crisp latkes from the oil and drain on paper towels. Serve or keep warm in the oven.

Make ahead: Latkes are best made and served right away. They can be fried and kept warm in a 200°F oven for up to 30 minutes.

Storage: Refrigerate leftovers in an airtight container and re crisp in a 300°F for 5 to 10 minutes. Watch the latkes when reheating so they do not burn.

Doubling: The recipe can be doubled, but take care to drain them well. The oil (and schmaltz, if using) will need to be replaced halfway through frying. Pour the used oil into a heatproof bowl, wipe out the skillet, then heat fresh oil and continue frying. 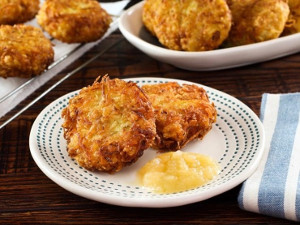 This is a classic, perfect every time latke.

Grate potatoes and onion with the shredding disk in a food processor. With a towel or cheesecloth squeeze liquid from potato and onion.

Add egg, matzo meal, salt, and pepper to the potato/onion mixture. Mix and set batter aside for 10 minutes.

Place the oil or schmaltz (or a combination of the two) in a large skillet so that when melted there is a depth of 1/4 inch (for a 10-inch skillet you'll need 1 cup of melted oil/schmaltz). Heat over medium-high heat until a piece of the latke mixture sizzles immediately.

Place about ¼ cup batter into the hot oil. Flatten to form a latke. Fry the latkes until golden on both sides. Repeat until the pan is full but the pan is not too crowded.. Cook until deeply golden-brown, 4 to 5 minutes per side, adjusting the heat if necessary.

Drain the latkes. Transfer the latkes to a paper towel-lined baking sheet to drain for 2 minutes.

Serve immediately with applesauce and sour cream, or transfer the latkes to the wire cooling rack set in the baking sheet and keep warm in the oven for up to 30 minutes while you continue cooking the rest of the latkes. 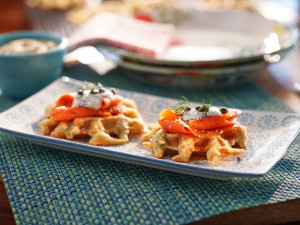 This is a fun appetizer or brunch treat. It’s easier than frying latkes and the taste is great.

Preheat a waffle iron. Using 1/3 cup batter per waffle, cook the waffles for about 4 minutes (or according to manufacturer's directions). With an offset spatula, flip the waffles and cook an additional 2 minutes, or until they're a deep golden brown. As you go, transfer the cooked waffles to a baking sheet and keep warm in a low oven.

To serve: Top the waffles with smoked salmon and a dollop of Tofutti sour cream or creme fraiche, sprinkle with dill and a little more Everything bagel spice. 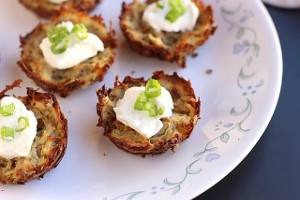 Photo by Flour by a Fork

I’m not sure if I should call these potato latke muffins or potato kugel muffins, but the shredded potato, makes them more like a latke than a kugel. These are a bit healthier than traditional latkes because they are baked and not fried (is that even allowed?). I like to make them for Hanukkah brunch events and serve them with a nice poached egg on top.

Heat 1 tablespoon vegetable oil in a heavy nonstick skillet. Add the onions, and saute over medium heat until softened, about 10 minutes. Stir in 1 teaspoon paprika; remove from heat.

Coarsely grate the potatoes by hand or in a food processor. Put them in a large strainer, and press out excess liquid. Transfer them to a bowl, and stir in the onions, remaining tablespoon oil, eggs, salt and pepper.

Put 1/3 cup of the potato mixture in each muffin tin. Smooth the tops lightly, brush with the remaining oil and sprinkle with a little paprika. Bake about 40 minutes, until brown at the edges and firm.

Remove the muffins and serve at once, or leave in the pans to keep warm for 15 minutes or so. 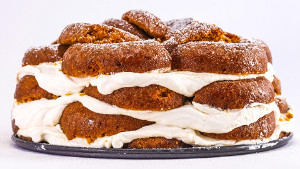 I saw this dish prepared on the Rachael Ray show. It's a lot of fantastic drama in presentation and tastes divine too. They made it for a Thanksgiving pumpkin dessert, but I think it's a great idea for Hanukkah. Feel free to use any doughnut flavor of your choice, but I’d stick to unfilled donuts for this recipe and use more of a cake style variety.

With an electric mixer, whip the cream until stiff peaks form. Fold in the maple syrup, cinnamon and salt.

Decoratively shingle the remaining 10 donut slices on top, then wrap the entire pan in plastic wrap and refrigerate for at least 6 hours or up to 2 days.

When ready to serve, remove the outer ring of the springform pan. Combine the confectioners’ sugar and pumpkin pie spice in a bowl, and lightly dust over the cake. Cut into slices and serve. 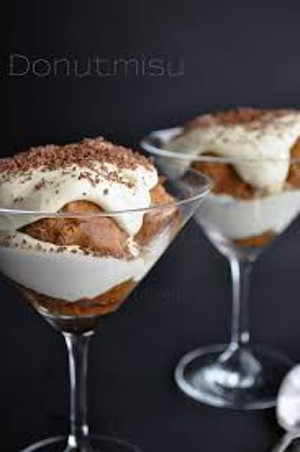 This can be served right from the rectangular baking dish or prepared in individual glasses as pictured. I usually make it in a glass 9x13 dish and slice it into rustic squares to serve it. I love the addition of donuts to tiramisu, it gives it an extra cake-like texture and a little more sweetness than traditional lady fingers. This can be made pareve or dairy.

Halve each donut horizontally. Arrange eight halves, overlapping as needed, into the bottom of a 9 x 13 shallow baking dish. Using a pastry brush, brush the donuts with half of the coffee, then top with half of the cream mixture. Arrange the remaining donut halves on top and brush with the remaining coffee. Top with the rest of the cream mixture, and then wrap tightly with plastic wrap and refrigerate for at least 2 hours or overnight.

Just before serving, dust the tiramisu with cinnamon and shaved chocolate. 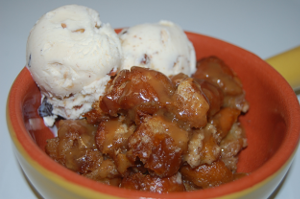 This is not dietetic but is delicious and fun alternative to sufganiyot for Hanukkah. Buy a wonderful caramel or chocolate sauce and serve it warmed on top of bread pudding.

In a food processor, combine margarine and sugar briefly, just until it forms into a ball. Add eggs, pareve cream, cinnamon, and vanilla, and process until blended.

Lightly grease a 9 by 13-inch baking dish. Break up the doughnuts into 1-inch pieces and layer in the pan. Scatter the raisins and pecans over the top. Pour the egg mixture over the doughnuts; soak for 5 to 10 minutes. You will need to push doughnut pieces down during this time to ensure even coverage by egg mixture.

The Best Latke and Donut Recipes

How to Make Doughnuts
The Promise Of The Land
Which Chat Are You On?: Parshas Behar/Lag Ba’Omer
Do You Like Slow-Cooked Food? Thank the Jews
Comments
MOST POPULAR IN Chanukah
Our privacy policy