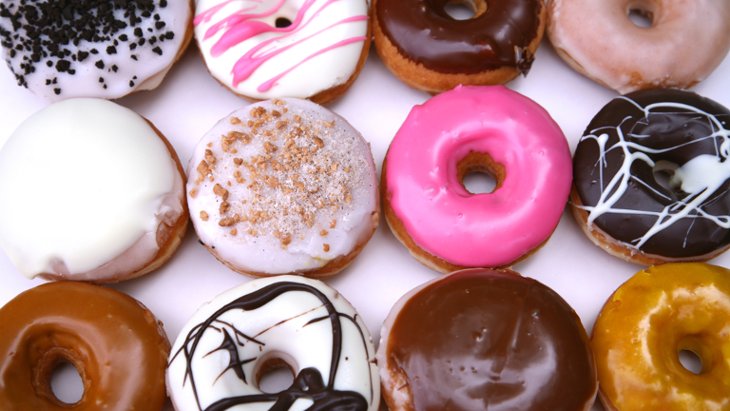 Israel's second largest donut buyer is an unsung hero who hands out Hanukkah treats to the poor.

Nothing in Israel says Hanukkah like “sufganiyot”! These very yummy, very unhealthy jelly-filled (or these days filled with almost any sweet flavor under the sun) globs of fried dough lovingly sprinkled with a dusting of white sugar are everywhere in Israel.

Over 5.2 million donuts (sufganiyot in Hebrew) are consumed with gusto during a typical Hanukkah season in Israel. Over 80% of Israelis eat at least one sufganiya over the holiday, making donut-eating perhaps the most observed religious ritual in Israeli life. The number one purchaser of donuts is the Israeli Army. The IDF buys close to a half a million donuts and distributes them via 100 trucks to soldiers all over the country.

What is truly remarkable and relatively unknown is the identity of the number two donut buyer. A Haredi man living in a nondescript apartment in Jerusalem orders a whopping 350,000 donuts with a $100,000 + price tag. The order is placed by one of the Jewish people’s unsung heroes who insists on remaining anonymous (I can vouch for this story; I personally know him!)

While Israel can proudly boast that it is the “startup nation,” despite its amazing technological innovations and globally competitive economy, sadly, over 21 percent of Israelis live below the poverty line. And when the festive Hanukkah season rolls around and everybody is savoring the luscious flavors of sufganiyot, one can only imagine how isolating it must be for Israel’s poor not to have the resources to purchase even one of these delicious Hanukkah treats. These feelings are compounded for Israeli children who are literally surrounded by donuts that are out of reach.

A remarkable Jersey-raised gentleman who moved to Israel over 20 years ago has dedicated himself to making life easier for Israel’s 21 percent. In addition to the over two million loaves of bread that he distributes annually and the huge sums of money he raises throughout the year to ease some of the burden of poverty, a few years ago he realized how difficult it must be to be poor around Hanukkah time. And more importantly, he recognized how one small jelly-filled donut can be the difference between feeling part of the joy of Hanukkah and feeling left out.

When he personally witnessed a family of eight dividing a single donut in minuscule slices so that everyone could have a taste, he knew he had to do something about this. He embarked upon a national campaign to ensure that no child (or adult for that matter) is left behind and that every single Israeli, regardless of their ability to pay, can taste the sweetness of a Hanukkah donut. He distributes over 300,000 donuts across the country, to the poorest enclaves and most destitute, and in the far-flung corners of the land, bringing Hanukkah joy to the downtrodden.

This Hanukkah, as we celebrate the miraculous survival of the Jewish people, let’s take a moment to ensure that not a single Jew is left behind. Wishing you a Happy Hanukkah and bon appetit.

If you would like to take part in bringing holiday joy to Israel’s poor, donations can be made online at https://www.cardknox.com/go-charity/

In the Hands of the Enemy
Big OnThe Little Things
Chraime Egg Boil
Is Grease the Word?
Comments