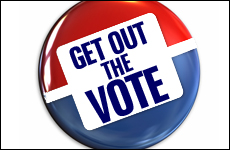 This Election Day, it’s very important for all of you Americans out there to make sure to go down to the polls and vote for – well, it actually doesn’t really matter who you vote for, so long as you’re voting. As an American, I am fortunate to live in a country (America) where it’s up to the public to decide who’s going to govern, which is why, for a little while in the late 1800s, we had a president named “Grover”.

It actually doesn’t really matter who you vote for, so long as you’re voting.

Nevertheless, a lot of the country doesn’t vote, except in Florida, where voting is a sport. In fact, according to a recent poll, the percentage of people in this country who actually vote is: 100%.

So maybe the system is flawed. But you should vote anyway. Americans live in a country where people fought and died for the right to vote. Okay, so I don’t know if they actually fought and died for it. I think that when our forefathers started the First Continental Congress, they held a vote to determine what percentage of them enjoyed voting, and the result was a whopping 800%. But our voting system has vastly improved since then.

Either way, someone worked very hard back then to make sure we could vote, so we’d darn well better vote. It’s like when your kids ask you for a food that you know they’re not going to like, but you give it to them anyway, and sure enough, they don’t finish it.

“You asked for it,” you say. “And you’re going to finish it. I told you that you weren’t going to like it.”

But here’s the thing: Every single person who votes is also just one person – even the really hare-brained voters who have no idea what they’re doing. And there are a lot of those. I know this, because I spent Election Day last year working the polls.

Yes, apparently you can just sign up to be a poll worker. There’s no Old Ladies Union or anything. You just have to be willing to sit around for long stretches of time (which I am great at), attend a mandatory training session (which I did), and show up at five o’clock in the morning so the polls can be open by six (“WHAT?!”) because apparently, some people like to get their voting in before they’re fully awake. For example, you have your elderly voters who view voting as a major form of recreation, know exactly who they’re going to vote for months before the election, and like to vote as a couple. One gets the feeling that they camp out outside the polling place the night before.

But aside from the Six O’clock People, no one comes in until at least after eight. There are no Six-Thirty People, or Seven O’clock People -- everyone comes at either six on the dot, or eight-thirty, or sometime after five P.M. But we poll workers still had to wake up in the fours. This could explain why government workers in general tend to be slow-moving and grouchy, and why it takes them ten minutes to look your name up in a book that is arranged alphabetically.

And it doesn’t help our grouchiness when we realize how clueless some people are. I’m sure you’re aware of these people. They get on line right in front of you, and you of course choose not to make a scene, because what’s one extra person, right? And even though they’re waiting for a half hour in front of a sign that says, “Voters may be asked to present proper I.D.”, and even though every single person in front of them was asked for I.D., they are still totally surprised, when they get to the front of the line, that they’re being asked to show their I.D. And then, after all that, they realize they’re in the wrong line. So they get onto another line, selected totally at random, and start the process over, and of course they put their license away, in case they don’t need it. But somehow, they still manage to get into the voting booth ahead of you, and then they just stand there, sometimes facing the wrong direction.

What are they doing in there? Trying on clothes?

What are they doing in there? Trying on clothes?

But my point is that, as poll workers, we are coming to work when it’s dark and leaving when it’s dark, so the whole experience feels like one long night that we spend answering the same three questions over and over, and all we really want to do is to sit down in a voting booth and go to sleep. We get there at five in the morning to put up signs that no one’s going to read, chase people out to their cars to give them their licenses back, and usher people into tiny booths that they are apparently getting lost in. And these are the people who are making decisions about who’s going to lead us.

So even though your personal vote might not count for a whole lot in the long run, as long as you’re making some kind of informed decision in there, you’re at least doing something to balance out all the idiots, who are typing in names of their favorite American Idol contestants. The elderly are doing all they can, but after six-fifteen in the morning, it’s all up to you.

We’re Here to Help
G-d Time
Shavuot is The Holiday of Cheesecake and Blintzes
What Does Kosher Mean Literally?
Comments
MOST POPULAR IN Funny Stuff
Our privacy policy