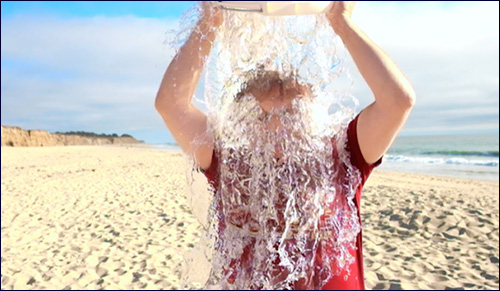 If you’ve been living under a rock or perhaps more accurately under a bucket of ice these past few weeks, you may have missed out on the latest craze to hit the world of hydro-philanthropy. The ALS Association rolled out a fundraiser where participants challenge three people to either donate $100 to the ALS Association to help find a cure for Lou Gehrig’s disease, or dump a bucket of ice water on their heads. Sorry Lou Gehrig’s disease, most people want to dump ice water on their heads.

But what about the rest of us who don’t want pneumonia? Is there a ridiculous challenge out there for us? Never fear, Jewlarious is here with:

In case you haven’t heard, London grocery chain Sainsbury’s stripped its shelves of kosher food over fears that anti-Israel protesters will annoy them with their rhythmic rhyming chanting. Way to stand up for freedom Sainsbury’s – I am sure Sir Winston is shepping naches right now. So here’s our challenge: go to Sainsbury’s, take an entire bottle of gefilte fish, and eat every last morsel in protest until they return the kosher food. OK and if you want, you can dump the jar of gefilte fish jelly on your head.

On July 28th, 2014 Hamas Spokesman Osama Hamdan said, “We all remember how the Jews used to slaughter Christians in order to mix their blood in their holy matzah. This is not a figment of the imagination or something taken from a film. It is a fact acknowledged by their own books and historical evidence.” On August 4th, 2014 CNN Anchor Wolf “the Beard” Blitzer interviewed Hamdan and asked him to clarify if he really believes such nonsense to which Hamdan replied, “You have to ask the Church.” That’s fair, right? Wolf seemed satisfied. So your challenge is to find someone who believes that the world is flat, that vaccines cause autism, or that 80s rock band Milli Vanilli were not in fact lip synching, ask them to explain their thinking, and then be completely satisfied with their response. Reporters who cover the Middle East seem quite adept at this so how hard could it be?

3. The Naftali Bennett Tell Someone You Hate them to their Face Challenge

Naftali Bennett is Israel’s Economy Minister. Naftali likes to speak his mind, even when he’s thinking angry thoughts. On July 28th, 2014, Minister Bennett was a guest on Al Jazeera television, and brace yourself, he was subjected to an extremely hostile interview. Naftali’s response was to tell the host, “Your owner, Qatar, funds the daily murder of children in Israel and Gaza.” In other words, “I hate you.” So your challenge is to find someone you hate, and tell them so. Straight to their face. Remember, record it and post their reaction on Facebook! It’s gonna be hilarious!

4. The Crank Up the Heat in an Israeli Taxi Challenge

As has been reported on Jewlarious previously, Israeli taxi drivers hate air conditioning. They will all tell you that their air conditioning units are broken, and they are all lying. The Shin Bet is reportedly still investigating this strange conspiracy. So you know what, don’t fight it. Embrace it. Here’s your challenge: take a cab ride in Israel and ask the driver to crank up the heat. Rolling down windows is not allowed! Proceeds go to the International Right Guard Association.

Usain Bolt can run the 100 meter dash in 9.58 seconds. But can he make it from a top floor apartment, scoop up three kids, help the elderly lady in the stairwell and then make it to the basement bomb shelter in 15 seconds? Because that’s what residents of the Israeli town of Sderot have to do. Hamas has fired over 3500 rockets into Israeli cities during the most recent hostilities and each time when Israelis hear a “Code Red Alert” they have only a few seconds to dash into their bomb shelters. So try this at home, at the office or with your friends in solidarity with the Israeli people. Extra points if you work at the BBC offices in London.

One of the things the last few months have proved is that the world is full of crazy people. Some of these crazy people have been pushing for a boycott of Israeli products. Our suggestion: go for it, but do it all the way. Technology from Start-Up Nation has been integral to countless products so if you boycott Israel that means, for example, no:

Earlier in the year, Canadian Prime Minister Stephen Harper stood before the Knesset and gave a thoughtful speech, highlighting something that should in no way be controversial. Harper said, “It is, thus, a Canadian tradition to stand for what is principled and just, regardless of whether it is convenient or popular,” or, to paraphrase, he said, “I am going to do what is right and that is stand behind Israel, even if it costs me thousands of ignorant voters.” So we challenge you to challenge your elected officials to take a principled stand on anything that could result in him/her going against popular opinion even if it is true. For example: Is the United Nations a force for good in the world? Come on, be honest. Or, Burger King chicken fries - are they really “back by popular demand”?

Finally, IDF Soldier Corey Feldman, who has had some remarkable plastic surgery work done since his appearance in the 1980s film Goonies, challenges people to put hummus on their faces as opposed to dumping ice on their heads. As Corey says, “Hamas is a terrorist organization that threatens the lives of both Palestinians and Israelis. Hummus, on the other hand, is delicious.” Participants are encouraged to donate $100 to the Friends of the IDF foundation. Here’s another ridiculous challenge that we can all get behind, right?

To donate to Friends of the IDF click here

Thou Shalt Twitter
The Softball Player
How This 6 Generation Bread Baker Brought Back Israel’s Ancient Grains
Olivia Newton John’s Grandfather was a Nobel-Prize Winning Jewish Physicist
Comments
MOST POPULAR IN Jewlarious
Our privacy policy
Aish.com Is Looking for Great Writers