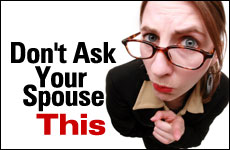 Five questions you should never ask your spouse.

How often have we heard the phrase, “Don’t ask!” spew from the lips of MOTs (Members of the Tribe)? Sometimes, a simple query, such as “How are you?” holds more minefields than Angola? And when it comes to spouses – sheesh – don’t ask!

Of course there are times when “Don’t ask!” can also mean we shouldn’t ask, ever! Obviously we need a little guidance here. Last time we looked at “Don’t Ask Your Date This.” Today, I’m kicking it up a notch with five questions we should never ask our Jewish Husbands and Wives.

Don’t Ask Your Husband This:

This GrandBubbe of the Bad Question will cause him to adopt the CS (catatonic stupor) stance. Such a question only encourages bad habits in the Jewish husband, such as lying (“You’re the same as when I married you – 20 years ago”), telling the whole truth (“Well, you have gained a few”), followed up by the unforgivable (“What? You expected to look 25 forever?”)  Much better to wait for him to choose a mid-life crisis two-seater sports car, and ask him, “Do you think I’ll fit in it?”

2. “If your mother and I both needed a kidney transplant, who would you pick?”

Such a question implies that you think that your husband has an unnatural attachment to his Yiddishe mama. So he gave her the passcode to his ATM, shleps you there every Shabbos, or brought her on the honeymoon? Remember! He’s not a mama’s boy. He’s just “the best little sonny in the world.” Therefore, not only will such a question create in him deep-seated resentment, he’ll wonder if you don’t truly understand him, which will require him to dig further. With his mother.

This query assumes husbands pay attention and notice. Despite all this popular psychology mishegoss, this is untrue, unless you’re married to a non Jewish man like John Gray who’s light-headed from flying around Mars. Take my word for it. The average male can see a ding in his 1986 Buick Skylark from a street corner in Uzbekistan but we could have teeth implants, cut our hair, and get a new nose, and he’ll wonder: “Artificial leg?” I suggest you discuss your hair/teeth/ nose with his mother, who will agree that these changes are essential, then bring her with you. Trust me. She will instruct him when, how, and about what, to kvell – or else.

Mamalas, since God created Eve, the Jewish female was gifted with some powerful pisk capable of using several billion words, while Adam, who lived for 930 years, had maybe 20, none over two syllables. As males only know from action words (verbs), you must omit from your speech all adjectives, then proceed right to “the headline.” Say to your husband: “I shopped. Was trampled by rogue elephant.  Lived.” Boom! You may add something about the full body cast – should he notice.

5- “Shouldn’t you ask directions/call a plumber?”

If you looked in the Bermuda Triangle, you wouldn’t find a wife. You’d find two million husbands who were on their way to a conference in Miami (kvetching, “Who moved the Atlantic Ocean?!”) Accept the fact that this dates to their Hunter-Fixer days. Gently point out that then, husbands only walked a mile to a big jungle or sharpened flints. Today, a true macher hires a less worthy cave-husband to: a) use a map when driving a camel to the Negev; b) put together a bedroom set from IKEA; c) set the correct time in his new Hybrid.

Don’t Ask Your Wife This:

1. “If you didn’t want the answer, why did you ask in the first place?”

Understand that it’s a Jewish wife’s job to ask questions. Do we want the facts? No. Listen and learn, mamalas:

WE ASK: “Why is she so late?” WE MEAN: “Get dressed and find her already.”

WE ASK: “Why do engines die in water?” WE MEAN: “Fish the car out of the lake for me already.”

So, should she ask you something, I suggest you stop with the explanations and “DO” already.

2. “Why are you always so moody/bossy? Is it hormonal?”

Jewish wives are not ‘moody,’ ‘bossy,’ or ‘hormonal.’ We are sensitive. Aware. And radar-ready. After all, if we weren’t hocking: a) would your socks match?! b) you’d be living in a sty! c) you’d all be scarecrows! or d) “Gevalt! You’d be lying dead somewhere!!”

Learn to appreciate her sensitivity. It comes from love. And asking such a foolish question, trust me, mamalas, will be dangerous to your health.

As a Jewish wife’s vocabulary is extensive and precise, to us “fine” is what we say when the plumber asks, “Lady, how’s the new garbage disposal?” When we’ve just returned from the salon, we don’t want to get the same praise as a garbage disposal. Familiarize yourself with these basic adjectives/phrases: “gorgeous,” “exquisite,” “movie star!” (Note: Do NOT use: “better,” “younger,” or “What a change!” which will raise suspicions in her that she looked like Hak Fleish before.)

The Jewish wife is constantly prepared. Who knows when the Benjamin Netanyahus may be dropping in, and his wife, Sara, is a bissel picky. So getting shmutz on her “best” like the “guest towels,” the “good silverware,” or using the extra soy sauce packets is a big deal! You must show respect. After all, would you want your wife to be known as a rotten balabuste throughout all of Israel?

5. “Why can’t you do that?” (After catching Martha Stewart on TV)

This is a very bad question. Jewish wives have for centuries sacrificed and done “without.” But only someone with a goyishe kop, like Martha, would chop down a tree and shear a sheep to make a Q-Tip.   Appreciate the fact that your wife is thrifty. Notice how she takes doggie bags of five french fries and devotes drawers to condiment packets, string, and unused Q-Tips. This, mamalas, is sensible.

So there you have it. Five questions you should never ask your mate! Should you feel any of the above about to spew forth, put two extra lemons in your tea and call me in the morning!

Confessions of a Romantic Cynic
It Takes A Lot Of Faith To Be An Atheist
How Instagram Brought Back This Nostalgic Soup
What Makes Eli Run?
Comments
MOST POPULAR IN Jewlarious
Our privacy policy