Forty Days to a New You 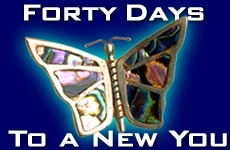 Today marks the first day of the rest of your life. Here's a Jewish method for making that concept real.

The most auspicious time to embark on a program of self- development is the first day of the Hebrew month of "Elul." For many generations, Elul has been a time for personal change and renewal. Elul, as the month preceding the High Holidays of Rosh Hashana and Yom Kippur, is the time specifically set aside for preparing for those events.

To put Elul into historical perspective, recall the story of the Jewish people at Mount Sinai. They had blundered badly with the Golden Calf, and things were not looking good vis a vis their relationship with God.

It was on the first day of Elul that the reconciliation process began. On that day, Moses ascended Mount Sinai (for a third time), where he spent 40 days in prayer on behalf of the nation. At the same time, the Jews themselves plumbed the depths of their hearts and renewed their conviction to accept the challenge they'd received at Sinai.

Forty days later, the Jews had raised themselves up to a spiritual position where they were once again fitting for a relationship with the Divine. On that day Moses descended the mountain with a second set of the Ten Commandments, symbolizing God's forgiveness and the reinstatement of the Jews as the people who would bear God's message. That day of reunification was Yom Kippur, the Day of Atonement.

Why did the process take specifically 40 days? What's more, the theme of 40 seems to show up in dozens of places in the Torah. The first time Moses ascended the mountain, he was also there for 40 days. Also, in the story of Noah and the flood, the rain fell for 40 days. The Jews wandered in the desert for 40 years. And a Jewish ritual bath ("mikveh") must hold a minimum of 40 units of water. And the list of "forties" goes longer still...

Forty represents the concept of renewal ― a new beginning. Forty means that something might look like the same old thing on the surface, but its essence is totally new. Consider:

The first time Moses ascended Mount Sinai for 40 days to receive the Torah, the Jews were transformed from a collection of individuals into a nation. Noah's 40 days of rain symbolized the world starting again from scratch. The 40 years of wandering was the transformation of a Jewish people, entrenched in Egyptian slave mentality, to one that understood true freedom. And immersion in a mikveh is the consummate Jewish symbol of spiritual renewal. (Similarly, it is no coincidence that God designated 40 weeks of human development in utero.)

The 40 days from Elul until Yom Kippur was crucial to renewing the relationship between God and the Jewish people. Whenever we perceive God as being distant, we can be certain that God wasn't the one who moved away. The people had become unworthy of such an intimate relationship. They spent those 40 days changing their inner selves, and ever since then, Elul is the ideal time for personal improvement and renewal.

The Sages teach that from the moment of human conception, it takes 40 days before the soul enters the body for the first time.

Yom Kippur, which is 40 days after Elul, is the day of spiritual re-birth. That is to say, it is the day on which a "new you" will be born. Thus the first of Elul marks the "conception" of the new spiritual you.

The development necessary to receive your renewed soul begins now.

Spend a few minutes visualizing the ideal "you." (It's best to write this down.) Think about these types of questions:

Once you have generalized the ideal you, try to describe that person in the most specific detail possible. This is not to say you will necessarily become that person in the next year, but if you don't know where you are trying to go, you won't get there.

Articulate some concrete goals. That is the first step toward permanent change for the better. As the Talmud says:

Rabbi Joel Padowitz, MBA CFA is a successful entrepreneur who has been involved adult Jewish education for more than 20 years, specializing in the interface between traditional Judaism & modernity. Rabbi Padowitz is the founder of both Palladium Capital Group, one of the USA’s leading boutique investment banks, and JewIQ, which develops digital and print content for Jewish education and travel. He is the author of Triumph and Tragedy: Journeying through 1000 Years of Jewish Life in Poland and co-author of the upcoming book, The Science of the Mishna. Rabbi Padowitz gives regular classes in Talmud and Jewish thought and produces a popular series of Mishna podcasts. He previously served as rabbi for Aish HaTorah’s young professional community in London. Aside from rabbinic ordination, he received his undergraduate degree from Harvard University and his MBA from Bar Ilan University. He holds the Chartered Financial Analyst designation and was honored at the White House by President George H.W. Bush for outstanding achievements in science.

How to Confront Your Mistakes and Try Again

The Month of Elul: Corona Style
Were Adam and Eve Jewish?
How I Learned to Love the Multiverse
10 Big Jewish Inventions
Comments