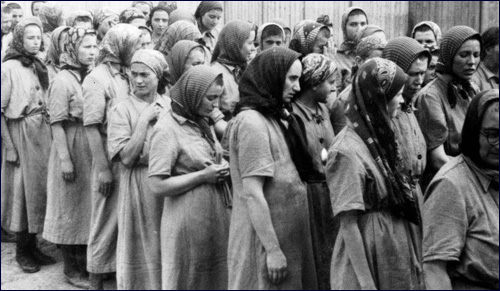 During the Holocaust, my grandmother gave up everything for her closest friend, only to be abandoned in return.

Train from Auschwitz to Bergen-Belsen, 1945:

Maniusia Adler was as alone as any human being could possibly be. Her mother and her baby brother had died in the Lodz ghetto. Her three younger siblings had been sent to the gas chambers as soon as they’d arrived in Auschwitz. Her father was gone and she had no idea if she’d ever see him again. Her grandparents, aunts, uncles, cousins - all of them gone.

She rested her feverish head against the hard wooden planks of the train. Suffering from a carbuncle, the Jewish doctor at Auschwitz had already told her that without medical treatment, she would die soon.

“So this is how I am to meet my maker,” she thought. She felt little regret. There was nobody left to live for.

“What’s your name?” a girl on the train asked.

“I’m Maniusia Adler from Pabianice. I’m the only one left from my family.”

“I’m Cipa Relkowitz and I think I’m as alone in the world as you are.”

The two young girls smiled at each other. They realized they had finally found someone in place of the fathers, mothers, brothers and sisters that they’d lost.

In the bowels of Bergen-Belsen, Maniusia and Cipa became true soul sisters. 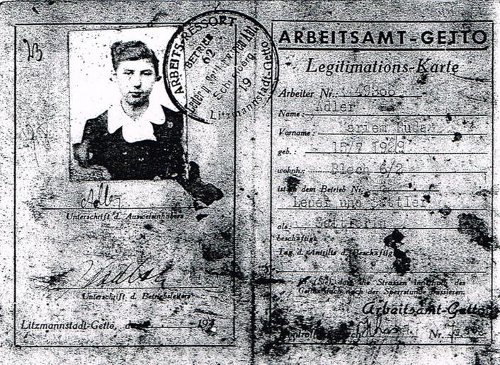 My grandmother’s work permit from the Lodz ghetto

From Bergen-Belsen, Maniusia and Cipa were transferred to a work camp, Magdeburg. There, Frauline Gertz, a righteous gentile, recruited Maniusia to work in a soup kitchen that she ran. In the soup kitchen, she clandestinely fed the girls that she hired. Since Maniusia was still entitled to a bread ration back in the camp, she gave her rations to her ‘sister’ Cipa, enabling her to survive.

Shortly before the end of the war, Frauline Gertz received word from her workers that they would be killed when they return to camp that evening.

“You must not return to Magdeburg,” Frauline Gertz said. “I will hide you girls. You and your mothers and your sisters.”

Maniusia had no mother. No sister. But she had Cipa.

“But my dear friend!“ Maniusia cried.

“I’m sorry,” Frauline Gertz said. “I have to draw the line somewhere. I cannot save your friend.”

Maniusia couldn’t abandon Cipa. She went back to the camp that evening to be killed along with her.

They returned to Poland to see if there were any surviving members of their families, but they couldn’t find anyone to speak for them. Poland was still a dangerous place for the Jews and two women, alone in the world, were easy targets. Every day they went to the municipality, searching through lists of names, hoping to find some trace of a surviving relative.

One day, Maniusia was approached by a woman named Paula, a neighbor from before the war.

“Maniusia,” she said. “You are no longer alone. I will take you home with me.”

“Please,” she said. “My friend Cipa here, she is the right arm and I am the left. Can you take her too?”

“I’m terribly sorry,” Paula said. “I barely have one extra bed, barely have food for one extra mouth. Feeding you will already be a brick on my head. Two of you? Impossible.”

Maniusia thanked Paula. “But I cannot leave without my friend,” she said. “I am nobody and she is nobody, but together, we are a little bit of somebody.”

One day, Cipa and Maniusia were doing what they always did – searching the world for someone to love, someone to love them, when they heard a voice calling for Cipa. She turned around.

Cipa’s uncle had returned and the two rejoiced.

“I thought I had nobody left,” her uncle said. “You must come and live with me.”

She had lain across the butcher’s board twice for Cipa, when Cipa had no intention of doing it for her.

Cipa looked at Maniusia and she could already see the guilt in her friend’s eyes. Times were difficult. He could not take on another burden.

Cipa left with her uncle, leaving Maniusia alone in the world again.

That night, Maniusia slept fitfully. It was hard for her to believe that she had lain across the butcher’s board twice for Cipa, when Cipa had no intention of doing it for her.

Maniusia managed to continue to survive without her dear Cipa. She was eventually tracked down by a surviving aunt and uncle in Paris. They obtained a visa for her to Santa Domingo which enabled her to travel to Paris to join them. Shortly thereafter, she married their son, her first cousin, Ari Adler. Maniusia and Ari made Aliyah to Israel, eventually emigrating to the United States where they raised a beautiful family. Today, Maniusia is the proud mother, grandmother and great-grandmother of numerous Jewish descendants. 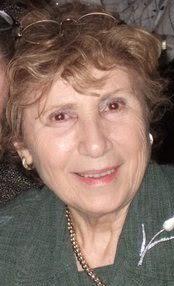 Only recently, I was interviewing my grandmother Manusia (now Miriam Adler) for a book I was compiling about her life. When she told me the chilling story of her and Cipa, I gasped.

“How terrible!” I said. “Did you ever see her again after that?”

My savta smiled. “But don’t you know who Cipa really is?”

I shook my head. She revealed the true identity of Cipa Relkowitz. It was the name of a dear and close friend of my grandmother’s, someone I’d known since I was a small child!

“I changed her name for the book,” she said. “I was afraid she might be embarrassed if the story were to go public with her real name.”

“But how could you possibly remain friends with her after the way that she abandoned you?” I asked her.

My grandmother shrugged. “Who was I to judge her?” she asked. “Everyone has their own way of dealing with things. Her way wasn’t necessarily my way. I forgave her.”

How many of us are loathe to forgive misdemeanors far less egregious than what transpired between Maniusia and Cipa?

How often do we expect to be treated in the same way that we treat others?

How often are rifts caused because we are holding someone up to some external measuring stick that we’ve concocted?

What would it take to let go of our preconceived notions of the way people should behave?

Can we entertain the possibility that everyone comes with their own unique set of circumstances and that it is not our place to judge someone else’s actions?

How different would our lives and our relationships be if we could forgive – not from a place of understanding – but from a place of accepting that everyone has their foibles, some greater than others?

Maniusia and Cipa’s lifelong friendship is testimony to the power of pure, untainted, forgiveness.

Yael's book, I Promise You – the story of her grandmother, Maniusia Adler's survival of the Holocaust – is now available with Israel Bookshop. This book, written in the present tense from the perspective of a teen, takes a unique and poignant slant on a story that should never get tired of being told.

Back to the Shtetl
It Takes A Lot Of Faith To Be An Atheist
How Instagram Brought Back This Nostalgic Soup
What Makes Eli Run?
Comments
MOST POPULAR IN Spirituality
Our privacy policy