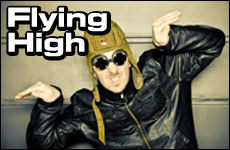 Statistically, it’s a lot safer to fly than to drive. I think I’ll take my chances.

I think they should get rid of airline safety speeches.

It’s not like anyone listens anyway, except for the infrequent fliers such as myself, who are convinced that this is the one time something is going to happen. Everyone else just ignores the speech and looks through their Skymall catalog for things that they absolutely need but don’t know why. (“Cool! Book ends that look like books!”)

I think they should get rid of airline safety speeches.

It’s not like what they’re saying is that useful. If everyone else on the plane is going toward the exit, we’re probably just going to follow them. Also, the flight attendants go into a whole speech about what to do in the event of a water landing, even though as far as you can tell, you’re not flying over water. Why don’t they tell you how to fend off alligators, while they’re at it? They also say that if the oxygen masks come down, you should put one on, and then, and I quote, “breathe normally”. But you know that if the oxygen masks come down, not a single person is going to be breathing normally.

But it’s still important that they give the speech, the idea being that if you prepare for an eventuality, then it probably won’t happen. It’s kind of like how, when you bring your umbrella with you, it doesn’t rain. Because if, heaven forbid, something does happen, they’re not going to suddenly give their safety speech over the people screaming, “How on earth do we put on seatbelts?” and “Should we breathe normally?”

On the whole, statistically, it’s actually a lot safer to fly than to drive, because on the road, there are way more idiots driving at 3 miles per hour with their blinker on and not realizing it because they’re staring at their phones. We only think planes are more dangerous, because not every car accident makes the news. With cars, we keep seeing ads about how safe they are. Whereas the “new plane” commercials aren’t marketed to us (especially those of us flying coach), so all we get are the news reports when something bad happens, as well as flight safety speeches every time we get on the plane that make it sound like every flight is going to end with people fighting over the floating seat cushions. But the truth is that airlines have very few disasters, and all of them make the news.

Like the recent story of an Australian pilot who was texting during landing, and totally forgot to put down his landing gear, and almost crashed into the runway. What happened was, the plane started the approach, and the copilot noticed that whenever he said something to the pilot, the pilot responded with one of those “mm hmm” noises that made it obvious that he wasn’t listening. So he looked over and saw the pilot answering some texts that had just come in.

At some point, the plane let off a warning, but by then it was too late to put down the landing gear, and they got within 400 feet of the ground before swerving violently upward and not exhaling again until they were safely back in the sky. You know how the speeches always say that everyone should turn off their phones? Maybe they’re talking to the pilots.

But in the meantime, there are safety issues that they maybe should mention that they don’t bother to bring up, such as trying not to annoy the hundred other people crammed into a tube with you, flying God only knows how high (because the pilot is too busy with his phone to know how high). Because as uncomfortable as you are, squished into seats that you could swear used to be bigger, everyone else is just as uncomfortable, and if you’re not cognizant of that, you shouldn’t be surprised if your fellow passengers attempt to stuff you safely into the overhead compartment.

For example, the last time I flew, my seat was in the very last row, on the aisle, with one of my arms pretty much in the bathroom. I had no overhead compartment to stow things in, because all the spare bathroom supplies were up there. I was advised to stow my bag at my feet, but my feet are too big. As it is, my toes were pretty much touching the heels of the guy in front of me. So my choices were to either hold everything, or put it on the floor and put my feet on top of it, with my knees under my chin. At least until the guy in front of me decided he needed to lean his seat back. He then spent the rest of the flight in the overhead bin, with the toilet paper, and I was able to put my bag on his seat.

There was only one compartment in that plane, and it was coach. I don’t know why it’s called coach. It has absolutely nothing to do with football, except that it’s a lot like a huddle. In fact, maybe we’ll all fit better if, like in a huddle, we just looped our arms over each other’s shoulders. Because the armrests definitely aren’t sufficient. Someone decided that for every two people, there should be one armrest. So ideally, if you’re living in a society, where no one is irritable, everyone agrees to use only one armrest, and they either spend the entire flight leaning away from each other, or everyone uses the one to their right at the beginning of the flight, and then halfway through the flight they switch, so that nothing falls asleep. But sometimes you’ll be sitting next to a passenger who is using two or even three armrests. Sometimes the people on either side of you will be using both of their armrests, and you will have to sit with your elbows touching each other, while both people fall asleep on your shoulders.

But don’t worry, they’ll wake up when you land, because they have more annoying routines to get to. For example, they have to stand up while the plane is still taxiing down the runway, like the pilot is going to forget to let them off. “This is my stop,” they tell you helpfully.

And of course they have to call someone to let them know they’ve landed. They say this right into your ear, even though you know they’ve landed, partly because they’re sitting on you, and partly because you’ve heard half the people on the plane say that same thing into their phones. You’d think that now that they’re on the ground, there are plenty of other places to call from. This isn’t really major news. Maybe they’re just surprised, after hearing that whole scary speech at the beginning of the flight, that everything turned out okay.

And meanwhile, the pilot’s doing it too. But he’s not calling his wife, he’s texting her:

Fall - The Most Wonderful Time of the Year
Who Was Josephus? The Controversial Backstory of the Famed Historian
Should I Break Up, Get Engaged or Keep Dating?
Time Is Your Precious Commodity
Comments
MOST POPULAR IN Jewlarious
Our privacy policy