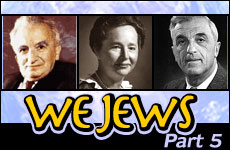 Firsts that never quite made it into Jewish history…until now.

Einstein, Baruch, Louis B. Meyer, Jonas Salk, Albert Sabin, Levi Strauss, Sigmund Freud, Edwin Land! Great names all. They got there/did that, first. Then they named it, and claimed it. But what of the hundreds – thousands – of Jews whose contributions, inventions, ideas, have been mis or under-credited?

For this, my readers, you may want to get some tape, to hang this list as a tribute on your wall, to the MOT creators, too often unsung, sung too softly, or way off tune.

When you’re talking gas, who better to check with than We Jews (especially after a healthy serving of cholent!) Experts on all kinds of natural gas, of course petroleum wasn’t discovered by an Arab or a Texan. The credit properly goes to Austrian Jew, Abraham Shreiner, an amateur scientist who found one could use petroleum to light the world! (And no, I’m not guessing whether matches were or were not involved.) In 1853, he built a distillation plant, a year before US-ians “discovered” it.

In 1861, 15 years before Bell patented his “phone,” Johann Philipp Reis, a German Jew, exhibited his own to scientists in Europe. OK, true, it sounded a bit like Donald Duck on tranqs, but did it he did! Scientific interest he didn’t get until much later. In 1861, the Germans issued a postal stamp in honor of: "First telephone by Philipp Reis from 1861.” In 1878, European scientists dedicated a monument to Reis, two years after Bell received his first patent. German textbooks credited Reis (until the 1930s, when the Nazis purged “Jews” from German lit.).

So, why no ginormous companies named Reis’s Ear Pieces? It didn’t help that in 1947, one Sir Frank Gill chairman of Britain’s Standard Telephones and Cables tested, then tanked any mention that an 1863 Reis phone still worked. Of course, Gill was negotiating with AT&T (a “Bell” evolution). What to do?! The “message” he transmitted? “Shut up!”

Before Orville & Wilbur There was Otto! After, There was Welsh

Unlike poor Reis, German Jew, Otto Lilienthal, who made the first glider flights in Berlin in 1891, was recognized by the Wright Brothers as their inspiration. In 1896, he was considering a motor, when, during a flight, he lost control in a sudden wind and tragically fell to his death. The first Jewish aviator, Arthur Welsh (Leibl Welcher) born in Kiev in 1881, fascinated by the Wright Brothers, persuaded the brothers to teach him to fly. And fly he did for their company, testing, teaching, and setting records. Welsh was mourned by Orville Wright, following a fatal crash in 1912 while testing a new plane for the War Department. A bust of the prize winning aviator and ardent Zionist are in the Smithsonian National Air and Space Museum.

Schwarz vs. Zeppelin Who and which created the first airship? Is the name correct or a Count’s chutzpah? There’s more mystery around this, than Elvis’s ethnicity. As I first heard the story, the zeppelin should have been called the “Schwarzian,” for a Zagreb Jew, David Schwarz (1852-1897), who invented and built a prototype in 1892. Ah ... but there’s more intrigue. When the German government finally OKed the thing, Schwarz dropped dead, some say from shock. Afterward, it’s alleged that Count Zeppelin bought the patents from Mrs. Schwarz --and took the credit. However... is this the emmes? Some accounts note Count Zeppelin’s own long-held interest in rigid metal airships, and once he got the rights to purchase aluminum, he was off and “zeppelin-ing.” To this day, the “truth” remains “up in the air.”

The Emmes about Edison and Emile

What? Edison didn’t invent enough, he was cited for the phonograph, too? Pooh! The gramophone was the brainchild, not of Thomas Edison, but of Emile Berliner. The good news is, he made good gelt selling records, players, and opening the first recording studio (1897) making him truly the Papa of the record industry. The forerunner of RCA absorbed his company and the famous logo — the pooch listening to “his master’s voice.”

Hands up if you’ve heard of Charles A. Levine? Bupkes?

Raise your hand if you’ve heard of Charles A. Lindbergh? Now, hands up if you’ve heard of Charles A. Levine? Bupkes? The 30-year-old entrepreneur who entered the “Fly me First” competition, and lost to Lindbergh, who flew solo, non-stop across the Atlantic in 1927, announced the very next day that his plane would fly faster and further! Only two weeks later, Levine’s pilot, Chamberlin, landed in a German field 42 hours later (shorter than the flight plan). But, Lindbergh's distance and speed record was smashed by Levine’s craft! And, along for the ride, he became the world's first trans-Atlantic air passenger! So, hands up if you now recall Levine? (Still bupkes?)

He Caught the Big Wave

Marconi invented the radio but it was Heinrich Rudolph Hertz who caught the “big wave” -- radio waves–and how to generate, transmit, and detect them (1887-1889).

All those Jewish doctor jokes have a basis. We Jews are “into” fixing. The Talmud makes reference to anesthesia, amputations, false teeth, artificial limbs, and even contraception. During the Middle Ages, about ½ of all Jewish intellectuals were doctors. One Big VIPPY in the 1500's was Amatus Lusitanus, physician to Pope Julius III.

Moses Maimonides (1135-1204), the greatest rabbinic thinker and physician of his time was also “on-call” to Sultan Saladin. His treatises on asthma, poisons, and hemorrhoids were studied in universities for 500 years!

And then there were…

We Jews know that Amoco, an acronym for American Oil Company, was started by father and son, Louis and Jacob Blaustein, who also invented the railroad tank car.

But the meaning behind Marcus Samuel’s (1853–1927) Shell Oil is a little more creative. In 1878, Marcus Samuel ran his father's London curio shop featuring ... sea shells. Marcus kicked things up a notch to an import-export business, and handling consignments of kerosene. He continued “notching,” natch, and in 1892, operated tankers to the Far East, set up oil depots, then, oil wells and refineries in Borneo. How to name the Big Biz to honor papa’s passion for the place? “Curio?” Scary. Plus, with huge buildings in Borneo, “Borneo Curio” became even scarier. Ah, but papa’s beloved imported shells? Sea, oil, shells had a common cache. So, in 1897 he formed the “Shell” Transport and Trading Company! During the next decade he had worldwide contracts for petroleum supplies. In 1898, he was knighted, and later became the first Viscount Bearsted, which I guess is beats the Viscount of Cockles.

Losing a little hair on your pate? No problem for Ron “Ronco” Popeil, who invented spray-on hair -- GLH-9 Hair in a Can Spray. In the 1950s, before celebs were hawking on home shopping channels, Popeil, inventor, and TV marketer supreme, saw the potential of TV to sell, sell, sell, cheaply, and in quantity. He introduced viewers to the Ronco Spray Gun, Veg-O-Matic, and Pocket Fisherman with an unscripted presentation. His products, such as Mr. Microphone, a Solid Flavor Injector, and Electric Food Dehydrator, have made over $2 billion – and kicked off a new M.O. for media selling: The infomercial!

Other inventors We Jews can be proud of…

Jewish Dinosaurs
Can You Show Me This "God?"
How to Become Immortal
Judaism and Mental Health
Comments
MOST POPULAR IN Jewlarious
Our privacy policy
Aish.com Is Looking for Great Writers