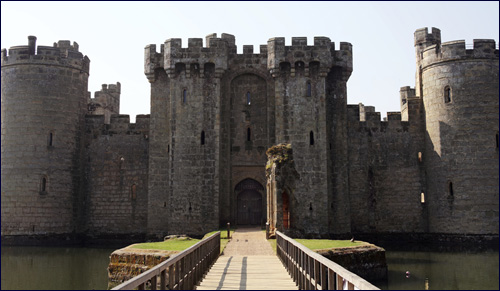 Taking my 4 young children to a British castle… probably not a good idea.

As much as Nochum and I try to have a normal existence it never really works out.

When a S.W.A.T. team heading for the next door building crashed our wedding closely followed by a very confused group of pirates who had gotten lost on the way to their convention, I should’ve realised it was only a sign of things to come. You’d think, when our flowers turned out to be mixed up with a film company's prop which turned into a supercomputer and informed us it would self destruct during the pictures (true story), it might’ve been a sign but no, I was oblivious to it all. By the time we’d been married for 8 years I was already used to the crazy goings on in our life and learned to be prepared. I always carry around a supply of baby wipes, spare clothing, portable bomb shelter, rope, camping gear etc. It sounds crazy but believe me it’s all come in handy.

This latest escapade began as we were cleaning out our Sukkah as the holiday neared its end. Uncle Benny was “Just leaving, 5 minutes and I’ll be out of your hair” and kept popping in, “Not to trouble you, but you wouldn’t happen to have seen my suitcase....” or “I couldn’t trouble you for a quick cup of coffee could I ?” or ” You haven’t seen my slippers around have you, the purple ones with the little pompoms ?” After Nochum found Uncle Benny’s suitcase, made his coffee, twice pointed out his slippers were on his feet, hunted for his shoes, searched for his car keys and finally waved him off, we began to deal with day trip ideas for the family.

We brainstormed, we googled, we called various members of our family for advice and came up with.... nothing. The aquarium was too boring, the zoo had banned us (after that unfortunate incident with the zebra and a pot of glitter paint) the science museum had threatened to call the police last time we were there (long story).

So after much discussion we decided to go hiking. Simple, fun, not dangerous, what could go wrong?

We left bright and early. At 11:30. Hey, it’s bright and early Jewish time! We exited Manchester – the city where we live - with a typical send-off of pouring rain soon followed by a “heat wave” of 15 degrees Celsius. We basked in the heat, rolled down the windows and watched the typical English pilgrimage to the beach whenever the temperature rises over 13 degrees. When I say watching I mean we had a front row seat, as we were stuck in the procession.

So, we had no choice but to turn off and try find somewhere else. Soon we stumbled upon Habshire Manor. By the time the thought occurred to me that this might not be quite the place to take 4 young children - the children in question were already inside. Nochum and I took one look at the very expensive looking pieces on display, looked at our rambunctious, obstreperous clan and ran.

Nochum went left after Shevy and Dovid and I went right after the twins. I sped down the corridor as modestly as I could trying to maintain some dignity and make a good impression of my People all the while praying desperately that they hadn’t broken anything.

Despite having to extract Yitzy from a suit of armour and Eli from a large Urn we were moving quite fast. This however did not seem to translate into getting anywhere. Harbshire manor was to be a maze of corridors that were more Gordian than Georgian.

When we passed Girl with a Pearl Earing (painting) for the 8th time, I resorted to using the Satnav on my phone to guide us. After insisting the wall was a door and the corridor the highway, it found it's bearing and led us to the front door. Which was locked. I knew the camping gear would come in handy.

Soon we found Nochum and Shevy but not Dovid. Before one of us went off to find him we needed to decide what we were doing about the locked door. Closer examination revealed it was heavily alarmed and the building was completely empty. Apparently they weren't worried about a break-in. Maybe they thought the thieves would get lost in the corridors.

Turning around slowly I noticed how Shevy had decided that this was a good time to drop our phones in the fish tank!

Well this is why I carry the tent with me. At least we had plenty of food. I decided it was time to utilise the maternal instinct gifted to me by God to find Dovid.

Within moments it led me to Dovid. Or maybe it was something to do with the button under his finger that was filling the sonorous emptiness of the place with a stentorian wail of a fire alarm.

At least the firemen let us out

7 Billion Is Not Enough
The Power Of Prayer
Va’etchanan 5782: A for Effort
Can You Show Me This "God?"
Comments
MOST POPULAR IN Jewlarious
Our privacy policy
Aish.com Is Looking for Great Writers