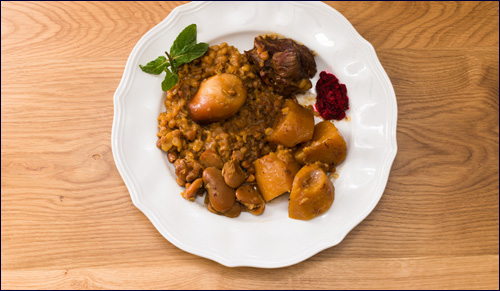 The Jews may be the "Chosen People" but we also are the "Cholent People.”

The Jews may be the "Chosen People" but we also are the "Cholent People." Technically, Jews are not required to eat cholent, but many do so religiously. In fact, when synagogues give bar and bat mitzvah gifts, they really should just hand each kid a pound of meat, a sack of potatoes and a crock-pot.

Cholent – like your proudly overweight uncle Stewart – can best be described as "meaty stew." It falls somewhere between goulash and chili, and usually has an aroma and a flavor that are inversely proportional to its appearance. In fact, some of the best cholent I've ever had looked like someone threw up in a bowl. Then again, some of the worst cholent I've ever had pretty much tasted like someone threw up in a bowl.

The history of cholent remains a bit of a mystery. Some scholars believe that the Yiddish word "cholent" derives from the French words "chaud" (hot) and "lent" (slow). By the way, "hot-slow" sounds more like a lava flow, but that does conjure up pleasant visions of a cholent-filled volcano erupting. Oh what a delicious disaster that would be!

Other scholars contend that cholent was created by Jews known as Pharisees who taught that it is permissible to eat hot food on Shabbat if such food began cooking beforehand. A competing Jewish sect, known as the Sadducees, refused to eat cholent or any hot food on Shabbat, which explains why that sect's name began with the word "sad."

Anyway, imagine if eating cholent was actually a specific positive commandment, "Thou shalt eat cholent," or a negative one, "Thou shalt not not eat cholent." (As an aside: Would a double negative be considered a positive or negative mitzva? Discuss.) Anyway, wouldn't it be fun to imagine what a theoretical cholent mitzva would look like and how the rabbis would deal with it?

In this halachic hypothetical, let's assume that the fourth commandment was modified as follows: "Remember the Sabbath day, to keep it holy . . . and on this day, also remember to eat cholent." Of course, the term "cholent" is not defined so let’s further imagine that the Talmud, within a make-believe Mishna, tells us that since the mitzvah of cholent is found in the fourth commandment, cholent must include four ingredients: meat, potatoes, barley and beans. (Cholent typically begins with this quartet but many people like to add a secret ingredient or two. If the cholent is a hit, the same people proprietarily refuse to divulge the secret, instead claiming that “it must be the pot.” Yeah, right. Whatever.)

Now, for further explanation on the laws of cholent, let’s dig a little deeper into rabbinic commentary, Gemara-style.

Rabbi Spud Fingerling asks: What is the proper potato-to-meat ratio? Answer: Enough potatoes so that nobody will notice that you cheaply skimped on the meat.

Rabbi Lima ben Chickpea, a/k/a the Beanbam, cautions: Don't judge a cholent by its pot. The Beanbam also notes that cooking cholent is like having a blowout argument with your spouse: let both simmer overnight for twelve hours and then in the morning, come down to the kitchen and tell them how great they look and smell.

Rabbi Pinto ben Kidney, a/k/a the Rambean, states that in terms of fulfilling the mitzvah of cholent, anyone who eats cholent on Shabbat is "Yotzei" (in compliance) but anyone who is offered vegan cholent made with only pumpkins and prunes is "Justzei" . . . as in "Just say no!"

Rabbi Postramy Salamiveitchik, a/k/a the Salambam, offers the following (sau)sage advice: Cutting up hotdogs and putting them into cholent is commonplace but, for some reason, putting cholent on a hotdog is not. (Conversely, adding hotdog pieces to a bowl of chili is unusual, but a chili dog is not. Go figure.)

Rabbi Multy Grayne, a/k/a the Abar(ley)banel, commented that a tasty cholent can help the unmarried find their bashert (soulmate). So if you’re single and about to mingle, bring a pot of cholent with you on your first date. That certainly will leave a lasting impression (one way or another).

Rabbi Eaton N. Standon notes that cholent need not be served formally at the table. You may leave it on the kitchen counter and let your vulturous family members and guests have it at. The meal usually is over when the cholent runs out so for less desirable company, make less cholent.

Finally, Rav Brew Beerbaum asks: May beer be added to cholent? Answer: Only if the beer is potato-based like Spud Light or Yam Adams. Rav Beerbaum then provides the Golden Rule of cholent: “What is distasteful to you, do not serve to your guest. That is the whole of the cholent, all the rest is commentary; now go and eat.” (Babaloney Talmud, Kishke, 31a.)

Bottom-line: A passion, yearning or even healthy obsession for cholent is perfectly fine. But, if you go to a coffee shop and order a non-dairy Salted Caramel Mocha Cholent-ccino, then you probably need a cholevention (cholent intervention), led of course by your uncle, Meaty Stew.

Communication Breakdown
Olivia Newton John’s Grandfather was a Nobel-Prize Winning Jewish Physicist
Don’t Believe in Other Gods Versus God is One
Seeing Without Eyes
Comments
MOST POPULAR IN Jewlarious
Our privacy policy
Aish.com Is Looking for Great Writers