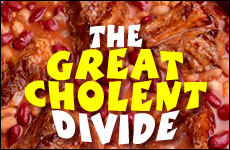 The only important difference amongst world Jewry is between those who love Cholent and those who hate it.

For a long time I believed that the essential divide among Jews was not between the religious and the secular, nor between the Ashkenazi and the Sephardi, not even between the Democratic and the Republican. I shouldn't have been surprised that the biggest schism in world Jewry was related to food: It was between those who love cholent and those who would never touch the stuff.

For the uninitiated, cholent is a stew of meat, potatoes, beans, and often, kishka (beef soaked in matzo meal and fat), cooked in a slow-cooker and eaten on Shabbat. It sure is filling, but can be a cholesterol nightmare, too, depending on the ratio of meat to fat in the kishka. In addition, according to my local zookeeper, cholent is even a more powerful sleeping agent than bear tranquilizers.

According to my local zookeeper, cholent is even a more powerful sleeping agent than bear tranquilizers.

As a card-carrying member of the anti-cholent brigade, I smugly assumed that my home would always remain a cholent-free environment. After all, I had read about the dangers of second-hand cholent, such as family members and guests falling asleep at the table before the dessert was even served. As long as I wielded the power of the pots, the pans and the mixing spoons around here, I thought I was safe. If anyone in the family wanted to eat that heavy, dark, artery-clogging stew, they could help themselves at the synagogue sponsored Kiddush.

But my children had other ideas.

"Why don't you ever make cholent?" they asked when they outgrew that stage when all they would eat was spaghetti and hot dogs. The request came as a bit of a shock. What was wrong with my normal Shabbat fare of healthy salads and soups, themed variations on chicken, lentils and rice?

The barrage continued: Mrs. Weinberg and Mrs. Firestone made great cholent. Why didn't I get their recipes? I searched in vain for a further defense, but couldn't find one. Maybe I had had a traumatic childhood experience with cholent, but as Dr. Phil would say, time to move on.

Besides, I had to think about our family's reputation. I didn't want my kids to have to accidentally overhear the whispers: "Oh, the Gruens. Their Mom doesn't make cholent, you know. It's so sad," they'd say, shaking their heads with pity.

No, I could not have this on my conscience.

Additionally, it suddenly seemed that everywhere we were invited for Shabbat, the hosts were sure to bring a steaming, heaping bowl of cholent to the table. As my kids took generous helpings, my sense of guilt grew heavier than the stew. Why, I began to feel that I was a rebellious daughter of Israel, flagrantly violating the 614th commandment: "Thou Shalt Make Cholent!"

I began to feel that I was a rebellious daughter of Israel, flagrantly violating the 614th commandment: "Thou Shalt Make Cholent!"

Finally, I was given an ultimatum by my son Noach, whose culinary tastes are strictly Eastern European: If I wouldn't make cholent, then he would! Now this is a kid whose most advanced "cooking" was melting cheese on a bagel in the microwave. Clearly, the cholent issue had reached a boiling point. I relented, reached for a cookbook, and made my maiden batch. The recipe was so easy; how bad could it be?

When I saw the kids pouring mounds of salt, ketchup and various other seasonings in their bowls, I had my answer. Now my ego was at stake, and I vowed to do better. The next week, I found another recipe, and received rave reviews. "Not bad, Mom," one mumbled. (Bear in mind, coming from a teenager, this is wild enthusiasm.)

I sat up a little higher, buoyed by my first cholent success. Now my kids could hold their heads high among their peers. We could invite the best of the Jewish world over for a meal, and we would not be shamed by a failure to deliver cholent. But after lunch, Noach made a confession: He had secretly added various ingredients to the pot.

"What did you add?" I asked, eager to see what I could learn.

"More garlic, some barbeque sauce, a chicken leg, and some other things you probably don't want to know about," he answered cryptically.

My resistance finally broken, my children proved victorious, and cholent became a staple of our Shabbat meals. As for me, I am slowly recovering from my irrational feelings toward cholent. As part of my therapy, I take small spoonfuls of it each week. I only wonder: if this stuff is so great, how come nobody will eat the leftovers on Sunday?