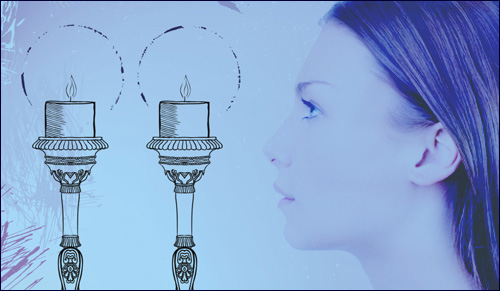 A special Shabbat song in honor of the Jewish woman.

The Jewish woman. If not for her, the Jewish people would still be enslaved in Egypt.

When Pharaoh decreed that all first-born Jewish males should die, the men decided to refrain from relations with their wives so as not to bring any more children into this world. The women realized that God would indeed save them and bring them out of Egypt, so they went to their husbands in order to bring more Jewish children into the world. Their faith and foresight were said to have merited the redemption from Egypt of the entire Jewish people.

The Jewish woman. The one who was offered the Torah first from Moses. After Moses received the Torah from God at Mount Sinai, he offered it first to the Jewish women, for he knew that if they accepted it, it would become part of the Jewish people for all time.

The Jewish woman. Who, in the face of adversity, held steadfast to her trust in the Almighty, even when those around her did not. While the Jewish people wandered through the desert, the men repeatedly complained to Moses and even asked to go back to Egypt. And, when Jewish spies were sent in to the Land of Israel and came back with reports of great dangers, it was the men who refused to enter. Forty years later, only the women of that generation merited entering the land.

The Jewish woman. Who time and time again saved the Jewish people through her insightfulness, virtue, and belief in God. There are many examples, one being Rebecca, who helped disguise her son Jacob so that her husband, Isaac, would bestow a blessing upon him and not upon Jacob's brother, Esau. She knew that it was Jacob who had the character to become the father of the Jewish people. Later, it was his 12 sons who led The Tribes of Israel.

The Jewish woman. In whose merit will come the Messiah and the final redemption of the Jewish people. (Talmud - Sotah 11)

The Jewish woman, who today is the one entrusted with the responsibility of maintaining the three mitzvot central to the Jewish home: kashrut, Shabbat, and mikvah.

If not for her, where would we be? There would be no home, no family... no Jewish people. On Friday night, she sits as the queen of her table, while all those around her sing her praises. And rightly so.

She is the Eishet Chayil, the Woman of Valor, who sets the tone of love, spirituality, and personal growth for all those around her. To know her is to appreciate her strength and talents. And, just in case you might happen to forget, "Eishet Chayil" is there as a weekly reminder.

These words are found in the Book of Proverbs (31:10-31), and accredited to King Solomon.

Sing it with feeling for your own Eishet Chayil, or to the Eishet Chayils that were the foundation of the Jewish people for thousands of years and continue to be so today.

1. Although only a custom, "Eishet Chayil" is sung at every Shabbat table throughout the world.

2. If no women are present, "Eishet Chayil" is still sung in praise of Jewish women everywhere.

3. If no men are present, the women sing it in praise of Jewish womanhood.

In other words, no matter what, sing "Eishet Chayil"!

print formatted text of this blessing

listen to audio of this song

A Woman of Valor, who can find? She is more precious than corals.
Her husband places his trust in her and profits only thereby.
She brings him good, not harm, all the days of her life.
She seeks out wool and flax and cheerfully does the work of her hands.

She is like the trading ships, bringing food from afar.
She gets up while it is still night to provide food for her household, and a fair share for her staff.
She considers a field and purchases it, and plants a vineyard with the fruit of her labors.
She invests herself with strength and makes her arms powerful.

She makes her own bedspreads; her clothing is of fine linen and luxurious cloth.
Her husband is known at the gates, where he sits with the elders of the land.
She makes and sells linens; she supplies the merchants with sashes.
She is robed in strength and dignity, and she smiles at the future.

She opens her mouth with wisdom and a lesson of kindness is on her tongue.
She looks after the conduct of her household and never tastes the bread of laziness.
Her children rise up and make her happy; her husband praises her:
"Many women have excelled, but you excell them all!"

Grace is elusive and beauty is vain, but a woman who fears God -- she shall be praised.
Give her credit for the fruit of her labors, and let her achievements praise her at the gates.

The first time I went to someone's Shabbat table, the husband sang this song, but no one explained it to me, so it could have been Happy Birthday for all I knew. After a friend told me what it was about I thought it was such a beautiful custom.

There's one family I spend Shabbat with a lot, and Friday night the wife always says, "You'd better sing my song."

I hope the men know that honoring their wives is not just for one song, it's for a whole week. Maybe it's there as a reminder.

Some of our guests think it's strange that my husband sings to me on Friday night at the Shabbat table. No one else usually knows the words because none of our friends are as observant as we are yet (though a lot are on their way), so there's this unbelievable silence surrounding him while he sings.

When we're alone, he always ends the song by saying, "Good Shabbos, I love you." Isn't that just so sweet?

A friend of mine who has a beautiful voice recorded the song on a cassette for me, so now I've been secretly practicing, playing it in my car to and from work. I'm waiting for my next Friday night get-together to surprise everyone. I'll never be a cantor, but at least I deserve an A for effort.

My husband always tells any bachelors at the table that they can't get married until they learn this song. They always laugh kind of nervously and quickly try to hum along.

I've been divorced a few years, which made some of the Shabbat rituals a little tough. I got used to saying my own kiddush, instead of my husband, but for years I just skipped "Eishet Chayil." Then one Friday night I had a girlfriend over who just naturally began singing it at the appropriate time. I found myself singing, too, and liking it. Now I sing it no matter who is there, and my kids have really picked up the tune. "Eishet Chayil" is now a fixture at our Friday night table, and I'm really glad. I missed it.

How To Light Shabbat Candles

Friday Night Kiddush: How To

How to Have a Meaningful Shabbat Dinner
Faith: the Axis Upon Which the Wheel of Science Turns
Love - Not Just About Chemicals Anymore!
Is There a Moral Code in a Virtual World?
Comments
MOST POPULAR IN Shabbat
Our privacy policy