Why Seven Is Holy 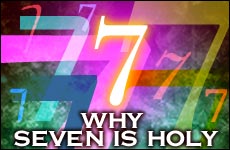 On Shabbat, we shut out the world so we can hear our soul.

How's this for a fantasy?

Your cell phone can't disturb you all day. No one can bother you -- not unsolicited stockbrokers, polltakers, collectors or companies offering a better long-distance plan. You're simply unreachable because you're finally going to be spending time with the most ignored person in your life: yourself.

Any serious observer of our contemporary society will tell you we're all just too busy -- too busy to think, too busy to be introspective, too busy to really see where we're heading in our lives as we get swept along by the daily torrent of appointments and meetings and obligations that make up the 24/7 of our existence.

Don't you really wish you could close everything down for a day, maybe once a week, and say -- in the words of that famous play's title -- Stop the world, I want to get off?

Some years back, Norman Mailer made a run for Mayor of New York. One of the more intriguing points of his platform, I kid you not, was the idea that one day a week everybody should shut off their phones, TVs and radios, stay away from the malls and the movies, and just learn to meditate and to reacquaint themselves with nature, their families and their own feelings.

Shabbat is for us, not for God. And it's not just a law; it's a lifesaver.

Well, guess what? Mailer lost but his idea was such a winner that it was approved by none other than God Himself. The only thing is that God didn't call it a suggestion; he made it a commandment. In fact it was one of only ten major principles He inscribed on tablets of stone as the bases for human survival. Almost 4,000 years ago, God called the plan Shabbat -- the Sabbath -- and those who took this divine advice seriously have been benefiting from its spiritual gifts ever since.

I've always been amazed that so many people think that by observing Biblical law they're doing God a favor. Trust me. God doesn't really get anything out of our heeding the call to “Remember the Sabbath day to keep it holy.” Ahad Ha-am, the great Jewish essayist and philosopher of the last century, put it beautifully in his famous epigram: “More than Israel has guarded the Sabbath, the Sabbath has guarded Israel.” Shabbat is for us, not for Him. And it's not just a law; it's a lifesaver.

Jewish mystics offer a remarkable explanation as to why the Sabbath falls precisely on the seventh day of the week. Human beings are bound by six directions: the four sides that surround us horizontally -- east, west, north and south -- and the two that are vertical, up and down. These six represent our daily existence. They circumscribe all our movements in the physical realm. But of course there is a seventh dimension. It moves our focus back to ourselves. It turns us inward to commune with our real being. We shut out the world so we can again hear our own souls. Seven is not only a lucky number (I wonder how that happened!), it's also holy. It's what the seventh day of every week is meant to remind us: We're created in the image of God, and if we only take the time to notice the spiritual part of ourselves we'll understand the connection.

One of the most unappreciated indicators of the Bible's eternal relevance is the Sabbath commandment. Round the world and throughout the ages, almost every society -- from the most secular to the disciples of the major religions -- have followed the seven day cycle for describing the passage of time. In Napoleonic France, after the Revolution, an attempt was made to establish a “week” of ten days, with nine devoted to work, followed by a day of rest. The effort failed in short order. It just went “against human nature.” Because human nature, it seems, is geared to the laws decreed by the Creator.

Human beings need one day out of seven to imitate what God Himself did when He created the world. Six days, He created. On the seventh, He rested. Not because He was tired. He hadn't really exerted Himself by saying the words, “Let there be…” to bring all things into being. What He did was to stop creating in order to evaluate what He had already created.

We take pride in our ability to be creative, just like God. But what if our efforts produce no better results than the mad scientist who succeeded in making Frankenstein's monster? And isn't that a perfect metaphor for scientific achievement without regard to ethical consequences? How successful is our creativity if we build weapons of mass destruction, if we produce culture that breeds violence, if we construct monuments to our arrogance, our callousness and to our stupidity? What if we spend our lives struggling every moment to acquire more so that we can achieve the absurd prize promised by the slogan “He who dies with the most toys, wins”?

Yes, like God, our obligation is to create, to be productive, to be busy – but only for six days of the week. On the seventh, we owe it to ourselves to review what we've accomplished by the spiritual standard of our souls. Only in that way will we able, like God, to reflect upon all that we've done and declare, “Behold, it is very good.”

Lively Shabbat Overview
For Every Individual, A Torah Scroll
Allegiance To The Monarch
Meet the Real You: Yom Kippur
Comments
MOST POPULAR IN Shabbat
Our privacy policy
Aish.com Is Looking for Great Writers