If Christmas Songs were Written about Hanukkah 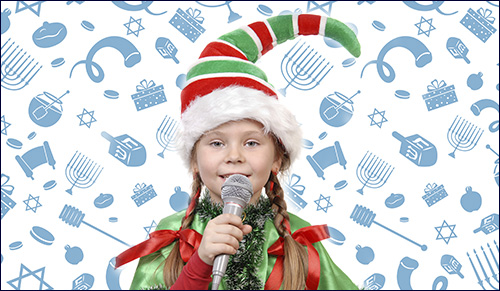 Many Christmas songs were written by Jews. If instead they wrote their songs for Hanukkah, this is what they’d look like.

Most Members of the Tribe (MOTs) know that some of the most enduring and memorable Christmas songs were actually written by Jews. To name a few, there’s “White Christmas” (Irving Berlin), “Chestnuts Roasting on an Open Fire” (Mel Torme), “Let it Snow, Let it Snow, Let it Snow” (Sammy Cahn and Jule Stein), “I’ll be Home for Christmas” (Walter Kent and Buck Ram), “Rudolph, the Red-Nosed Reindeer” (Johnny Marks).

“Shlomo, the Red-Nosed Rabbi, Nebuch has a shiny nose…”

It occurred to me, what if these brilliant songwriters penned Hanukkah songs instead? After all, not only do the trees, hefty gelt, and holly boughs of Christmas seem to dwarf our Festival of Lights in today’s society, but face it … “Dreidel, Dreidel, Dreidel” and Adam Sandler’s “Hanukkah Song” (plus a few most of us haven’t heard of) don’t exactly make us chalosh from tears of joy and remembrance. Nor do they reflect our hardships and dilemmas.

So, in my simple way … I tried to correct this aberration and re-write their songs for us, We Jews!

Latkes frying in a ganza pan,
Candles dripping on your toes
Dreidles spinning by your open fire
While Sandler sings his Jewish prose

We know that Purim's on its way
In costumes we'll all play.
And every mama's kinder is going to spy
The chocolate coins on which they'll keep an eye.

And so I'm offering this simple wish,
To Maccabees from one to 2,502
Although it’s been said many times, every way,
May Hanukkah be a mechaya to you

*About Mel Torme: Melvin Howard Torma was born in Chicago in 1925. His parents were Russian-Jewish immigrants. He was known by both peers and audiences as The Velvet Fog for his distinctively smooth jazz style. He wrote “Chestnuts Roasting on an Open Fire” with Bob Wells (Levinson) in 1944. Of the hundreds of songs he wrote this Christmas song was by far the most popular.

*About Sammy Cahn: The multiple Academy Award-winner was born Samuel Cohen in 1913 in the Lower East Side of New York to Jewish immigrants from Galicia. Cahn was a major songwriter of his day, writing for films and Broadway. He had a string of hits sung by Sinatra, Doris Day, and Dean Martin among many others.

*About Jule Styne: A Broadway legend, Julius Kerwin Stein was born in England in 1905 to Ukrainian Jewish immigrants and moved to Chicago at the age of eight.

3- TO THE TUNE OF “RUDOLPH, THE RED-NOSED REINDEER” by Johnny Marks*

Shlomo, the Red-Nosed Rabbi,
Nebuch has a shiny nose.
And if you ever saw it
You would even say it glows.

All of the other Rabbis
Said prayers for his allergies to go.
They always let poor Shlomo
Schnarfle and they let it go.

On one foggy Hanukkah Eve,
His son the doctor came to say,
“OK, so your nose is bright,
Papa guide my Shul tonight?”

All of the Congregation loved him,
As they shouted out with glee,
Shlomo the Red-Nosed Rabbi,
Went down in Jewish history!

*About Johnny Marks: Born in Mount Vernon, New York to VIP Jewish parents in 1909, he was actually known for his Christmas standards, which also include: "Rockin' Around the Christmas Tree,” "A Holly Jolly Christmas," "Silver and Gold," and "Run Rudolph Run.”

4- TO THE TUNE OF “WHITE CHRISTMAS” by Irving Berlin*

I'm dreaming of my first Menorah
Just like the one I used to know;
Where the candles glisten and children listen
To hear the story of our foes.

I'm dreaming of my first Menorah,
Just like the ones I made in Shul.
May your days be eight and light,
And may all your Hanukkahs ... be bright.

*About Irving Berlin: One of the greatest and most prolific composers in history, he was born Israel Isidore Beilin in Russia in 1888. His father was a cantor. The family moved to New York’s Yiddish Theater District in 1893 where “Beilin” became “Baline.” A true legend, the “Great American Songbook” is filled with his work and reflects his genius.

I'll be home for Hanukkah
OK. You can plan on me
Please have latkes mit sour cream
Because for you, I’m missing my dream.

Hanukkah will find me
Where my mamalas will be.
But I'll be in Miami Beach
If only in my dreams

*About Walter Kent: Born Walter Maurice Kaufman in 1911, in New York City the Jewish composer is most famous his musicals and reviews. In addition to the Christmas standard "I'll Be Home for Christmas," he also wrote the touching wartime song, "There'll Be Bluebirds Over The White Cliffs of Dover.”

*About Buck Ram: The songwriter, born Samuel Ram in Chicago into a Jewish family was also a pop music producer and arranger. His most famous work was with the The Platters. He also wrote and produced for The Coasters, the Drifters, Glenn Miller, and Ella Fitzgerald among many others.

The Funniest Jewish Jokes, Part 3
Scientific Curiosity and the Divine Encounter
Mind Over Milkshakes
Love the Convert
Comments
MOST POPULAR IN Jewlarious
Our privacy policy
Aish.com Is Looking for Great Writers