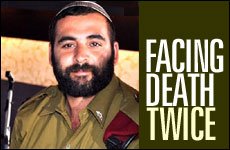 Rabbi Uriel Malka, age 32, was working as a chaplain in the Prisons Service and died tragically in Israel's worst fire.

Rabbi Uriel Malka, 32, who fought in the IDF against Hizbullah in hand-to-hand combat in the Second Lebanon War, was among those killed on the Prisons Service bus that was engulfed by flames in the Carmel forest fire on Thursday.

Malka, from Karnei Shomron, who was training to be a chaplain in the prison system, was with Prisons Service cadets en route to Damun Prison to evacuate prisoners from the paths of the flames.

He was laid to rest Sunday night at the military cemetery in Yavne.

A former principal at the Ohr Hatorah Day School in Winnipeg, Canada, Malka recalled in an extensive interview in October 2008 that he narrowly escaped death fighting Hizbullah two years earlier. 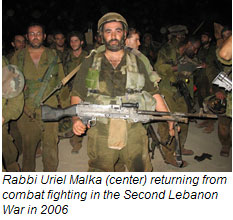 “It is a miracle that I am alive, as there were times in the war when I was shot at directly by Hizbullah terrorist fighters,” he said. “I met them face to face. I could see their eyes.”

Twelve of Malka’s colleagues from his paratroop unit were killed in a Katyusha rocket attack on Kfar Giladi, as they were standing outside, in a parking lot, en route to deployment in the Lebanon War on August 6, 2006.

“I was not in Kfar Giladi with them because I was already in Lebanon,” he recalled in the interview.

“We did not find out that those in our unit had died right away. Our commander had us take out the batteries to our equipment so we could not hear the names of those who died so we wouldn’t realize they were from our unit. Four days later our commander called us together in the [deserted] home of a Hizbullah terrorist and told us what had happened. He told us we had to be strong. It was very difficult.”

Malka, who is survived by his wife, Ortal, and five children, recalled in the 2008 interview that on his very first day in the Second Lebanon War he got a taste of how difficult things were going to be.

While fighting in the village of Rabat Talatin, he said, “Hizbullah terrorists were shooting at us in one direction, and as we pursued them from that direction, another group of Hizbullah came from the other direction. 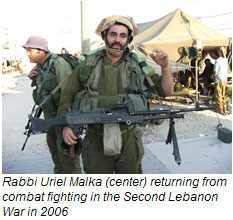 There were 60 of us from my unit in a Hizbullah home. Hizbullah had the opportunity to shoot three missiles at us in the house.

Had they hit the house, all of us would have died. The first two missiles just missed the house. The third one hit the roof. We were all lucky to get out alive.”

At the time Malka got called up to fight with his unit, he was scheduled to go on shlichut (emissary service) with his family to teach in Denver.

“My ticket was booked and our suitcases were already packed. The Jewish Agency later told me that if I had explained the situation to the army, I would not have had to serve in the war. But I knew I couldn’t go to Denver and leave my friends. We are like brothers in my unit. I couldn’t have left them to fight alone. So I canceled my ticket and we got to Denver later than planned. I left for Denver two days after the war ended.”

Malka reflected on his experience in the 2006 war, saying “We had lots of problems with not getting enough supplies sent to us. We would take over a Hizbullah home and we wouldn’t have enough to eat. So we were eating rice and potatoes and items from the homes of Hizbullah....

“We underestimated how well Hizbullah was prepared for us,” he said. “They had better electronic and communications equipment than we realized, they knew the terrain and they had built extensive escape routes, which made it hard to find them.”

He added: “In Lebanon, my unit fought at night, because we had special equipment that gave us good night vision, which gave us an advantage over Hizbullah. But then it turned out we did not have enough of this special equipment, and this advantage was eliminated. We then fought also in the day. A lot of things went wrong. I don’t like to talk about it.”

Malka’s wife, Ortal, who was also interviewed in 2008, remembered that when her husband was called up to Lebanon, she was very worried. “I was four months pregnant, and it was a very stressful time.” 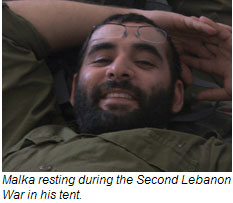 Ortal taught at the preschool at Ohr Hatorah Day School in Winnipeg in the fall of 2008, before the couple returned to Israel. Her husband had a bachelor of education degree from the Beit Midrash for Teachers of Judaic Studies in Rehovot, and was a graduate of the IDF’s hesder program, which combines study and military service within a religious Zionist framework.

Prior to leaving Israel for Denver, Malka and his family lived in the settlement of Karnei Shomron, east of Kfar Saba. Before arriving in Winnipeg, he spent two years teaching at an Orthodox day school in Denver.

Rhonda Spivak is the editor of an e-paper, www.winnipegjewishreview.com

Only in Jerusalem
What Makes Eli Run?
The Tyranny of Materialism
Science Enters the Mysterious Inner World of Consciousness
Comments
MOST POPULAR IN Israel
Our privacy policy